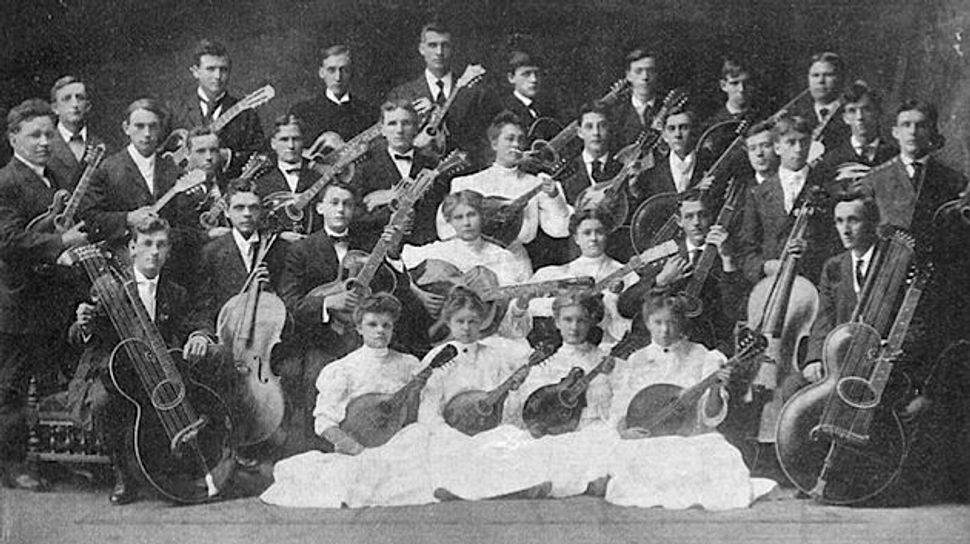 On June 1 the New York Mandolin Orchestra will celebrate its 90th anniversary at a concert in Manhattan. The repertoire ranges from a Vivaldi concerto to St. Louis Blues. Founded in 1924 by a Russian Jew named Samuel Firstman, the orchestra was initially affiliated with the Jewish communist newspaper Freiheit. For a time it performed both the national anthem and the socialist Internationale at its concerts.

“All these people had come from Europe and it was part of their culture. They believed in a larger culture,” says Bill Knapp, a concertina player who was a card-carrying member of the Wobblies and played with the orchestra for more than 30 years. “It was very important to them that they play this music, that they learn it, they pass it on.”

Among the New York Mandolin Orchestra’s alumnae are the bluegrass virtuoso Barry Mitterhoff, who was given his first mandolin by his aunt Sylvia Reuben who had played in a mandolin orchestra in Newark, New Jersey. Mitterhoff, who now performs with the acoustic music group Hot Tuna, joined the New York Mandolin Orchestra in 1976 and served as its concertmaster for 12 years. He’ll participate in the concert on Sunday.

“By the time I got involved in 1976, there were very few, quote, unquote younger players, which included anybody under 50,” Mitterhoff told the Forward. “Most of the members were senior citizens and some of them were couples. They all worked in factories and sweatshops.

When I first covered the orchestra in 1992, I was introduced to Jack and Florence Melman, Russian Jews who were proud union members.

“I worked in a factory as an operator,” Mrs. Melman explained. “Pocketbooks.”

“I also was an operator,” Mr. Melman chimed in. “In luggage.”

Both the Melmans have passed away and at the age of 90, the New York Mandolin Orchestra is the only one of seven mandolin orchestras that once existed in the city to still be plucking away. Orchestras affiliated with the Workmen’s Circle, the International Ladies Garment Workers Union, the International Workers Order and the Jewish Peoples Fraternal Order have bit the dust.

Today there are an estimated 30 mandolin orchestras in the United States, down from the hundreds that existed before World War I. A resurgence of mandolin orchestras began in the late 1970s and continued into the ’80s after David Grisman and others brought the mandolin into jazz and the Modern Mandolin Quartet emerged with a repertoire that ranged from classical string quartet music to bluegrass.

In New York Barry Mitterhoff helped bring players from the bluegrass scene into the orchestra. One of the newer members is Leah Wells who also plays bluegrass banjo.

“Some of the bluegrassers I know dip into classical mandolin playing and I’ve gone and seen them. I always enjoyed it but it just hadn’t occurred to me that it was something that I could do,” said Wells. “I’d like to bring some of this to my mandolin students. It’s just giving me all kinds of ideas.”

Wells joined the New York Mandolin Orchestra just two months ago. Irene Roberts, on the other hand, has been a member for 27 years. When she was a kid, her mother played in it.

“When I first started, Barry Mitterhoff said to me, ‘When you join the orchestra, it’s for life. You don’t play one year. It’s for life.’ And he’s right.”