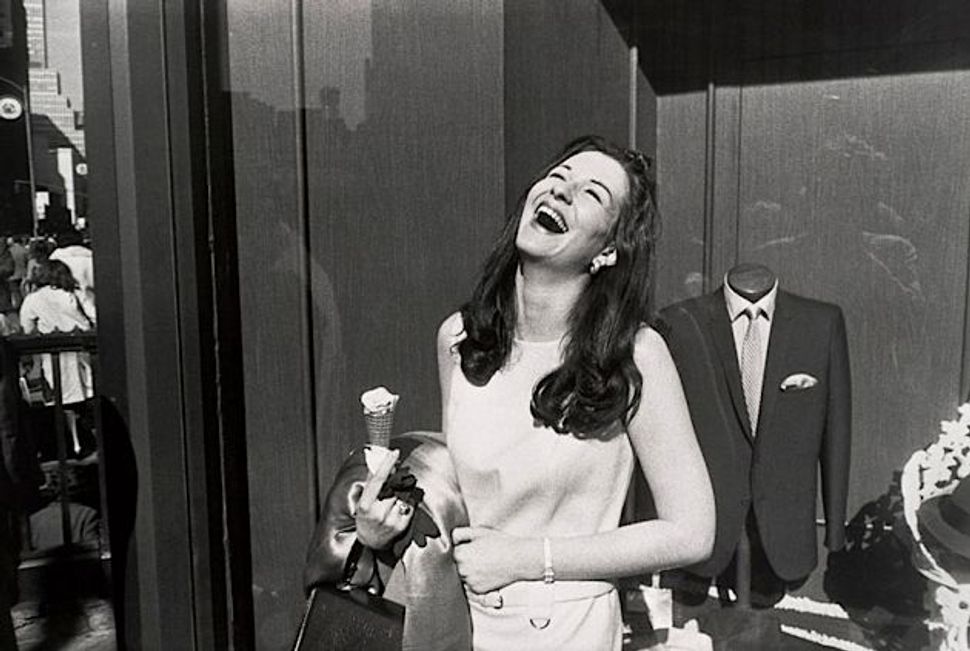 Walking through the many rooms in the National Gallery of Art’s exhibit “Garry Winogrand” (through June 8), I was surprised to see several groups of transfixed boys. Winogrand, after all, was born in 1928 and died more than 20 years ago; he had an ingenious eye for interpreting urban street scenes and the pedestrians that passed through them, but his work has nothing to do with Instagram or iPhones. Why, I wondered, were these young boys so interested in black-and-white photographs from the 1970s?

Winogrand’s program of photographing beautiful women has been controversial. The photographer, born to Jewish parents who left Budapest and Warsaw for the Bronx, is “routinely criticized for exploiting the subjects of his work,” according to the website of the Worcester Art Museum, which showed works from the series in 2013. The photographs of the young women in the series are “typically composed to emphasize their breasts and backsides,” the site adds.

The women wearing only bras, or no bras, surely grabbed the attention of the young visitors I saw at the museum, but dismissing the series as exploitation from the photographic mind of a dirty old man would be a tremendous mistake. There are certainly works from the series that call attention to boldly–dressed women and unconsciously lifted skirts that evoke Marilyn’s white dress.

But the series also includes photographs like the one with five dogs that almost entirely obscure a seated woman. Her hair and the small part of her face that is visible parallel the head of the dog in front of her, and her knees are nearly indistinguishable. In the work, Winogrand seems far more interested in the blurry lines between canine and human than in exploiting the female figure. And even the photographs that have been accused of focusing inappropriately on the female body do so within an artistic, rather than a pornographic, composition. Perhaps the charge that the works are exploitative reveals much about those who level the complaint.

Two standouts are [“New York”][5] (1968) and “Party, Norman Mailer’s Fiftieth Birthday, N.Y.C.” (1973). The former shows a woman (who happens to be beautiful) throwing her head back in delight as she eats an ice cream cone in front of a clothing store display. The joy depicted in the photograph is sensual, but it’s no “When Harry Met Sally” scene at Katz’s.

The photograph of Mailer captures the Jewish novelist hunched over a podium and surrounded by a crowd. Perhaps the room was too crowded for Winogrand to be able to snap the image from an ideal vantage point, but one wants to believe that the photographer’s eye settled intentionally not on the celebrity birthday boy, but on the magical manner in which the light played off the microphone stand on the lectern.