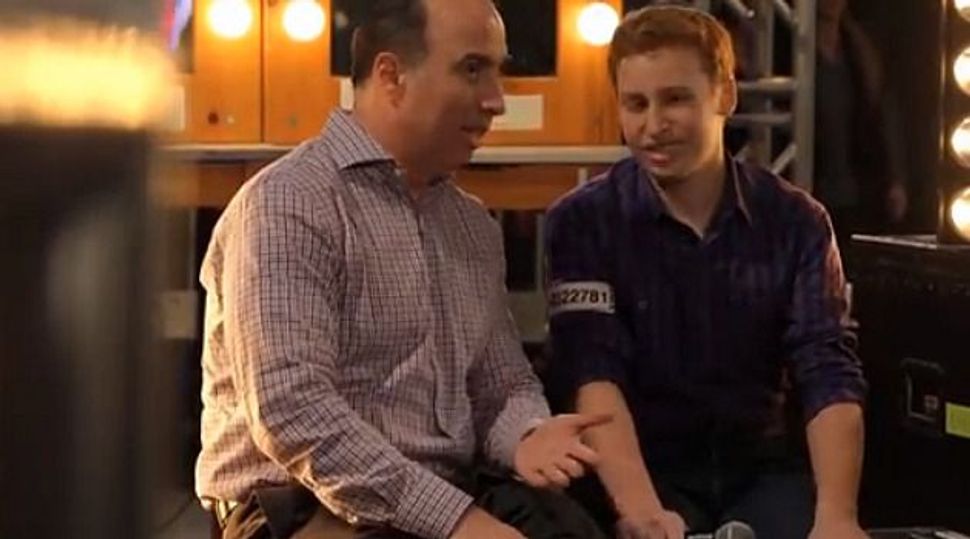 (JTA) — Those taken aback by the sexually charged comedy routine of kippah-wearing 12-year-old Josh Orlian on “America’s Got Talent” now have one more reason to be surprised: He took some of the material from his dad.

Josh appeared on “America’s Got Talent” Tuesday night, wowing the judges with racy jokes. In one bit, Orlian said that after attending circus camp, he wanted to learn “sword swallowing,” but his mother objected. To which, he said, his father replied: “I’m not surprised. Your mother hasn’t been interested in sword-swallowing since we got engaged.”

Asked about his wife’s reaction to the jokes, Josh’s father, Joey, responded on TV that “she just heard them for the first time.”

Except that may not be true.

In 2011, Joey Orlian had his own stand-up comedy debut at New York City’s Gotham Comedy Club. And three minutes into the act, he made the same joke, almost word-for-word.

“The trick my son wants to learn this summer is sword-swallowing,” the elder Orlian said. “And he came to me one day after camp and he was kind of upset because his mother said, ‘Look, you can do other things, but you’re not doing sword swallowing.’ So, you know, I felt bad for him, but I told him, ‘Look, your mother hasn’t been interested in sword swallowing since we got engaged.’”

Watch Joey Orlian’s full stand-up debut below. Jump to 3:10 for the sword-swallowing bit.