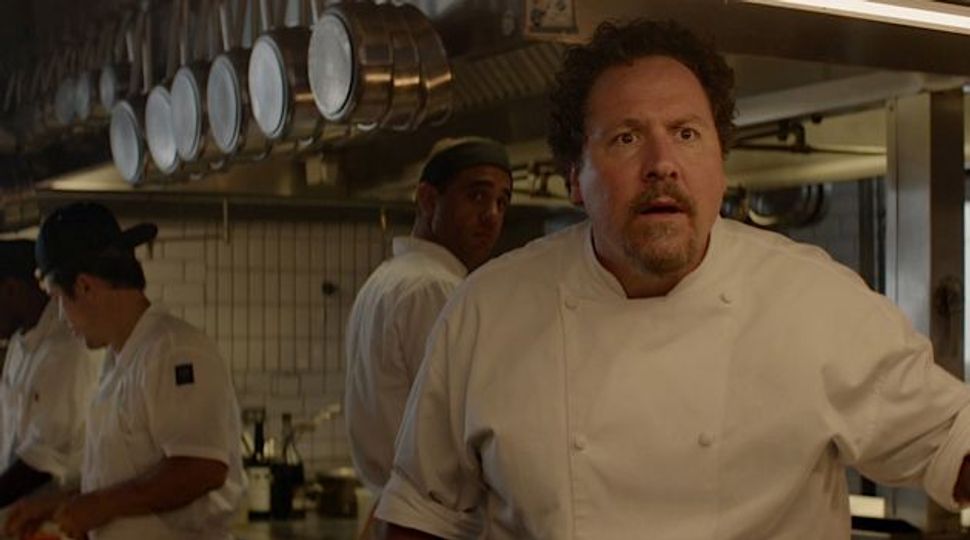 Jon Favreau’s “Chef” is diverting — funny at times, warm at others — entertaining, and also vaguely evil. Its emotional arcs are satisfying. Its kid stays on the right side of movie cute. He holds back, even withholds; a clear credit to Favreau’s direction. Scarlett Johansson wears full-throated, “Buy me some Sodastream, stranger” vampiness. You really will leave the theater hungry and happy, jealous of the saffron-scented meals and backyard orchards of southern California. It’s a good movie for humid nights and also vaguely evil.

We’ve seen this story before, though that’s part of “Chef”’s charm. Chef Carl Casper (Jon Favreau) is malaised. He supposedly has final say over the menu at his top-shelf restaurant, but the owner (Dustin Hoffman) keeps talking him out of trying new spices and dishes. He’s divorced (from Sofia Vergara) and ignores his son. An all-powerful critic (Oliver Platt) rips apart his boring food and a social media flame war ignites.

There’s an in-person explosion. Chef Casper loses his job and can’t find a new one. He flies to Miami with his ex to babysit their child — part of her scheme to get him to open a food truck and be his own boss again. The rest of the movie is a road comedy. Casper and son and sous chef (John Leguizamo) drive their food truck from Miami to LA, hawking cuban sandwiches via Instagram and Twitter and Vine and Facebook everywhere they go. (The movie is a social marketer’s fantasy. Maybe even a social marketing fairy tale.) SPOILER ALERT: father and son come together.

I have no problem with the story. Sometimes you want to hear a standard, and “Chef” hits the right notes. I love that Jon Favreau cast both Scarlett Johansson and Sofia Vergara as his love interests. And I especially love the fact that “Chef” includes a scene whose sole purpose is to get us to suspend disbelief. Seduction via garlic simmering in hot olive oil, shredded cheese, herbs, and long strands of pasta played to high-camp perfection.

It starts with the food: Cuban sandwiches. Does Caspar have a twist on Cuban sandwiches? Not as far as we can tell. He makes them with love and to exacting standards and they are good. Cuban Sandwiches are also an excuse for the movie to live in the nightlife of Little Havana, to fill the frame with live musicians and bodies moving and swaying, and to fill the THX speakers with beautiful sounds. The lighting is soft, intoxicating. We like these things. They make us happy. But it is not reaching beyond the familiar and the easy.

Actually, the problems start earlier. We can’t avoid the fact that “Chef” is a meta-narrative for Jon Favreau’s career. Favreau made his reputation writing “Swingers.” He made small films that were important to him. Then he took Big Studio money to make Big Studio movies and had to play the hits for Dustin Hoffman-like bosses. (Sidenote: Even stand-ins for studio executives are played by Jews.) “Chef” tells us that this is fine. Play the hits for the bosses, then make your passion projects on the side. A fairy godmother might even come along and let you bring some of the indie sensibility to the Big Budget filmmaking.

Problem #1: “Chef” is the passion project. Favreau is running in reverse. “Made,” his second screenplay and the first movie Favreau directed, is aggressive, uncomfortable. The movie hits you with unlikable characters. You want the remote from “Stay Tuned” so that you can jump into the frame and punch Vince Vaughn in the face. But the push-pull of attraction and repulsion captivates. Vaughn’s incompetence makes the moments of (near) competence and confusion that much more rewarding. Sometimes you laugh uncontrollably because it’s hilarious. Sometimes you laugh uncontrollably because you need to break the tension. Favreau’s movie lives on the porous border between brilliant and awful. I wish more directors dared to take their work there.

Problem #2 is how thoroughly the meta-narrative devalues the potential of Hollywood — and what that says about Favreau’s own big budget filmmaking. Making a blockbuster doesn’t have to mean being conservative. Nothing looked like “300.” The “Bourne” movies suffused action movies with low-tech immediacy. “The Dark Knight” and “Inception” are tense psychological thrillers about evil and trauma. “Iron Man 3” is a hoot and a half. Favreau’s first “Iron Man” was smart and had a great take on the characters. He gave us a corporate movie that just happened to end with men in robot suits pummeling each other. What happened to that Jon Favreau?

I wanted “Chef” to champion ambition. Why did he serve Cuban sandwiches, when he could have served anything? Culinary heroes start by doing their own thing. They mix traditions, embrace local cuisines and local ingredients, even in places when the locale was thought barren. Their innovations have become accepted, mainstream, but they started on the bleeding edge. They made the taste. I wanted Chef Casper to go his own way and see out his culinary vision, his innovation. The movie never gave me a vision. The movie gave the accepted.

There’s a scene where we watch Chef Casper cook the food that he would have served the critic if only his boss had let him. The scene crosscuts with the critic eating the same boring food at the restaurant. Why couldn’t Chef Casper have sent a tweet saying, “I’m not at the restaurant, come to my house?” Why couldn’t he have opened a different restaurant? Of course he never could have done either of those things. The movie was always going to be a movie about the food truck, about going back to small budget roots, about the return to purity.

But there’s nothing noble and pure in struggling and in first features. “Chef” confuses ambition and honesty with scale. It equates a return to roots with “doing what you know,” when the real launch of the artistic career is transcending what you thought you knew and what you thought was right. Some people grow by digging and gnawing at their sore spots. Nothing’s made me happier over the past year than watching one of my closest friends become a deeper writer. He’s still writing what he knows, but he’s writing openly now. With his own voice he speaks about things that are painful and demonic.

Others grow by trying the new, by embracing new philosophies. Their views twist and their style becomes ethereal. Alfred Kazin’s essays attained their singular power because he intentionally deadened a part of himself. He defanged the fierce bitterness and anger we read in his journals, muted it to a volume we could bear. The criticism that rocks me hits on my deepest fears about myself. Its words look like an angry mirror. I push myself to avoid catching sight. My sentences are backlit by the terror that my sentences will never be better.

So, yes, “Chef” is a good movie. I recommend it. It is also vaguely evil.