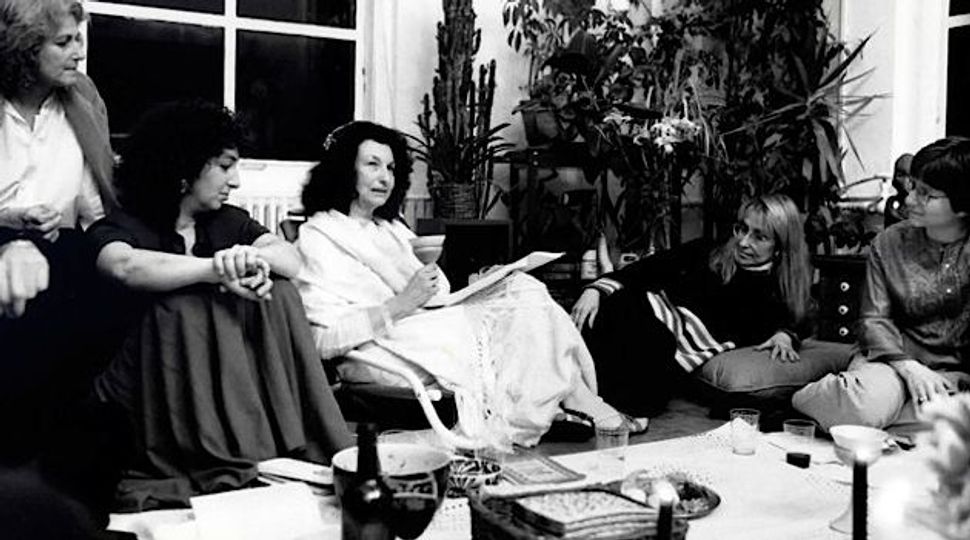 Early on in Lilly Rivlin’s 2013 documentary, “Esther Broner: A Weave of Women” — now available on DVD — the narrator describes the effect that the author, professor and activist had on Jewish feminists of the second wave. As the narrator recalls, “We were all Jewish feminists. The question that Esther posed for us was: Do we find a place for ourselves within the Jewish tradition or remain outside?”

Esther Broner is perhaps best known for the feminist Hagaddah that she co-authored with Naomi Nimrod, which was first published in Ms. Magazine in 1977 (it took 17 years for a publisher, Harper San Francisco, to then print it as a book). The Hagaddah grew out of a women’s Seder inaugurated in 1975 that Broner, a “Seder sister,” helped to organize and run. The film includes documentary footage of this and subsequent women’s Seders, right up until Broner’s last one, in 2011. At this final Seder, seated beside her granddaughter, Broner recalled how, in the past, she had been booed out of certain synagogues for trying to stir up traditions. “I think Esther’s greatest legacy is her legitimization of alternative rituals,” Letty Cottin Pogrebin, co-founder of Ms. Magazine and a participant in many of these Seders, declares in the film.

For many of the women captured in Rivlin’s documentary, Broner’s investment in Jewish rituals and practices, and her respect for the very Orthodoxy that so often excluded women, was what allowed her to become a force in a Jewish feminist movement that eventually influenced women of all stripes, from the Orthodox to the secular. Gloria Steinem notes that for her, attending a women’s Seder was a kind of rebellion, not least because she had “never been to a Seder before in my life.”

Memoirist Vivian Gornick admits that she was drawn to Broner not for her spiritualism, but for her “genuineness.” Indeed, as so many of the openly adoring women throughout the film reflect, Broner had the ability to develop and sustain communities of women grounded in the rigorous interrogation of everyday injustices and wonders. Like author, writer and activist Grace Paley, the subject of a 2010 award-winning documentary by Rivlin, Broner subsisted on a community of women that looked to her for inspiration and provocation.

So what does a feminist Seder look like? For Broner, the event was about changing the order of things, as Nimrod explains. Each had a theme that was often related to stories of heroic women. Participants would introduce themselves by their matrilineal heritage, in order to stress what Broner referred to as the “tracings” of women whose stories might otherwise be left unacknowledged.

The plagues were redefined: dam, or blood, evoked the terrors of unplanned pregnancy in the face of a lack of abortion rights, and dever, or cattle disease, related to young women herded like cattle in beauty pageants and impaired by unattainable images of beauty. A sacred shmata would be wrapped around the group at the end of the night to confirm a sense of unity. “It gave everybody a chance to speak and everybody a chance to listen,” Steinem attested of the women’s Seder.

As we witness in the film, the experience often included an outpouring of testimonies from attendees. Susan Rosenberg, activist and political prisoner, movingly declared at one gathering: “This is my first Seder in freedom in 20 years and I feel overwhelmed at the beauty and joy of it. Part of the hope has been, for me, always, that one day I would come to this Seder.”

Broner’s brand of the women’s Seder has, of course, expanded outside of her circle of friends, acquaintances, and invited guests, and many around the world continue to hold similar events, some on a much larger scale. But as Rivlin laments towards the end of the film, many have no idea of the woman whose passion ignited these alternative rites and rituals.

Weaving together readings of Broner’s prose, documentary photographs, interviews, and footage from many of these Seders, the film goes a long way towards evoking Broner’s unique contributions towards feminism, Judaism and literature, documenting and celebrating the breadth of one women’s legacy.

“Esther Broner – A Weave Of Women” Trailer from Lilly Rivlin on Vimeo.