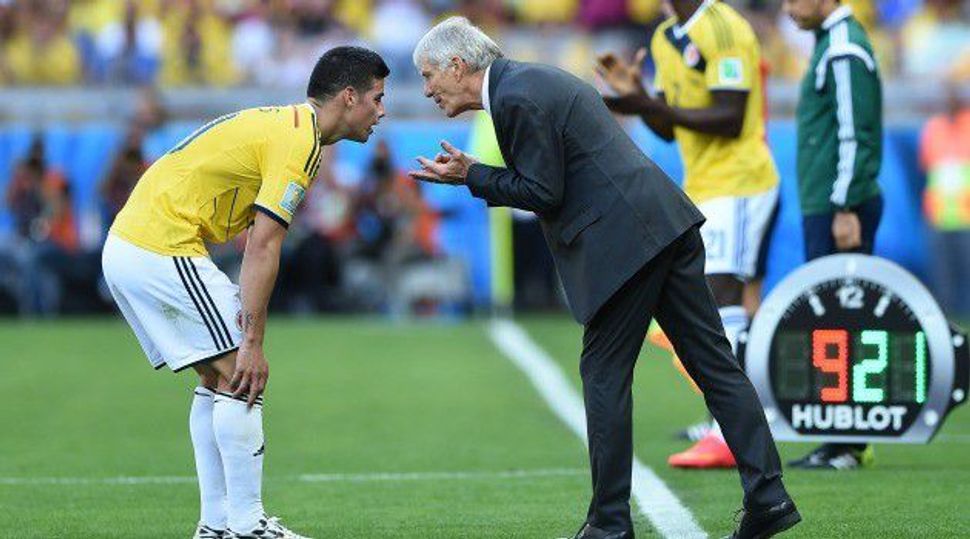 Jose Pekerman chats with Colombia player as the team prepares to face Brazil in the World Cup. / Getty Images

There’s a joke being told in the bars of Rio about how different national teams tried to curry support. Italy put out a press release that if they won they would give free pizza to everyone. Brazil made an announcement that they would distribute free coffee. And France put out a sultry tv ad saying “cheese and baguettes pour tous!”

The Japanese were about to promise something about sushi when Diego Maradona stands up and starts chanting “Col-om-bia, Col-om-bia!”

Colombia, with a soccer-mad population of over 40 million, has soccer resources other than Maradona’s favorite nose candy. They have one of the world’s best strikers in Radamel Falcao (named apparently by a smurf, but touched by the soccer gods) and one of the world’s most promising youngsters, James (pronounced “ham-es”) Rodriguez.

But their main asset is José Néstor Pékerman Krimen, a Jewish prophet cast out of his native Argentina into the wilderness of Colombia only to effect first the miracle of qualification to the World Cup Finals and now the miracle of reaching the last eight. What other miracles might he work in the next few days?

For a generation, Colombian soccer has been globally synonymous with the bright yellow of Carlos Valderrama’s perm. This time around the team is more successful and less exuberantly coiffed, perhaps Pekerman can make the specter of Valderrama disappear.

If this guy could do it, Pekerman could. If any man can, Pekerman can.

When you have a team built from mostly spare parts of second tier teams, it would have been useful to have an $80 million player who can do this. Falcao was too injured to even join the squad in Brazil. That Pekerman has won without him so far, makes winning without him an achievable miracle but a miracle nonetheless.

The normally garrulous Jewish and Israeli media have been stumped so far by the focused Pekerman. In the face of the odds he can lead his team into the promised land of the semi finals, in almost complete silence, like the imperturbable lovechild of Joshua ben Nun, Marcelo Bielsa and Harpo Marx.

Like Belinda the Good Witch, Pekerman can put the ruby slippers (or golden boot) on James Rodriguez. Rodriguez is the tournament’s top scorer at the moment. And though it was Rodriguez who actually put his boot through this and this, (see here) who was it who told him to be there and try?

Brazil has only lost once in the World Cup in Brazil. That was in 1950 in the final game against Uruguay. Sixty four years on, the country is still reeling from the loss — they have a name for the tragedy, the Maracanazo. Let’s see how soccer-mad the country really is. Can it stay passionate, positive and intense if the over-hyped seleçao get beaten in the quarter finals? It could happen, but it would take a Pekerman miracle.

If Colombia does beat Brazil, Pekerman will turn water into champagne!