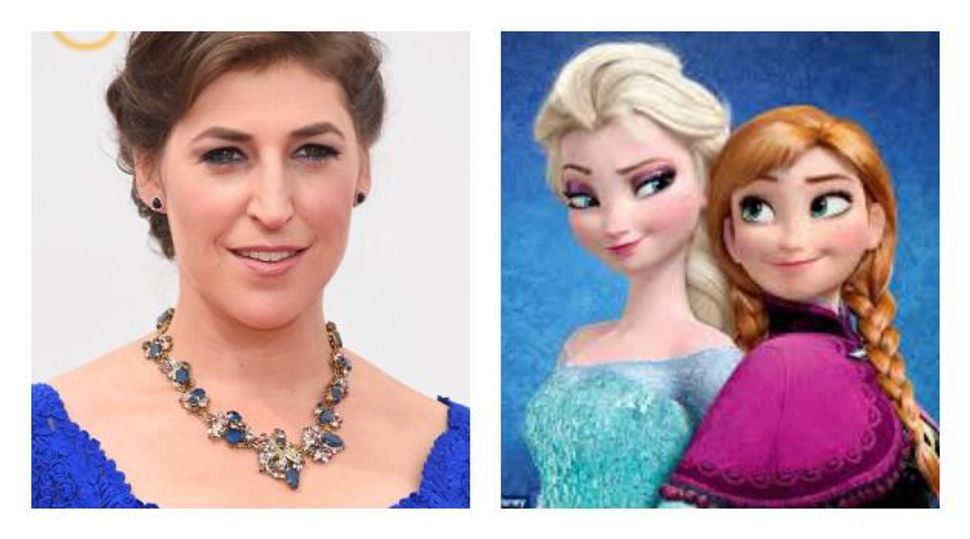 In a post written for her personal blog on Kveller, Mayim Bialik has disavowed the frosty fairytale and instant cult classic that captured all our hearts this year. Yes — Mayim Bialik hates “Frozen.”

In “Why My Sons and I Hate the Movie ‘Frozen,’ the “Big Bang Theory” star and (former) favorite Jewess explains her reasons. Here they are below, with some added commentary by yours truly:

1) The Lack of Female Agency

Sure, it’s sort of hidden, but the search for a man/love/Prince is still the reigning plot line in the movie, as it is with pretty much all movies for young people which are animated. The sister’s desire to marry this guy she just met, and the other sister getting mad at her — we still have a plot about the identification of a woman being based on her desire and search to meet a man … I’ve had just enough already with this finding a man business in most every kids’ movie.”

OK. Fair enough, the plot ends on a love story. But the reason that “Frozen” has garnered such positive praise is that the search for a man plays is secondary to the love between two strong-willed and powerful sisters. Being awkward, impatient, waking up with drool on your face — these are all seen as endearing (and just, well normal) aspects of life that a girl should embrace rather than hide. Anna is every girl who has made a bad decision about a man. It’s only fair that she gets her happy ending at the end.

While I don’t love the fact that there has to be a love interest in just about every movie for it to be profitable, it’s not something that will just suddenly disappear overnight. “Frozen” is one step on that path.

“What happens in Frozen? The Prince/hero turns out to be a scheming villain. He pretended to love her and then he double crosses her and she gets the lesson taught to her not to trust those nasty scheming conniving men. Because you know, men can’t be trusted? Meh.

So, just so I understand — we’re upset that the movie centers around finding a man but also outraged that said man turns out to be an a**hole? Telling young girls that not every Prince Charming that glances their way will turn out to be that great seems like a reasonable life lesson to me. That being said, let’s not forget Kristof, that shaggy, socially inept, adorable lug of a guy that Anna ends up with at the end. There is hope for all of us.

“My biggest problem with this movie was the way the female characters are drawn and animated,” the 38-year-old star concluded. “The male characters look like cartoon men. They have some exaggerated features, sure. But by and large, they look like they have the proportions of human beings. Not so with our lead ladies. They have ginormous eyes. Like really ridiculously big. Teeny-tiny ski slope noses … Barbie doll proportions of their bodies in general: tiny waists, ample busts, and huge heads. They look like dolls. They don’t look like the same species as the male characters even! What’s up with that?!”

This one I can get behind. Disney princesses, much like Barbie, are known for their ridiculous proportions. Case-in-point: Princess Jasmine. How can she even breathe?