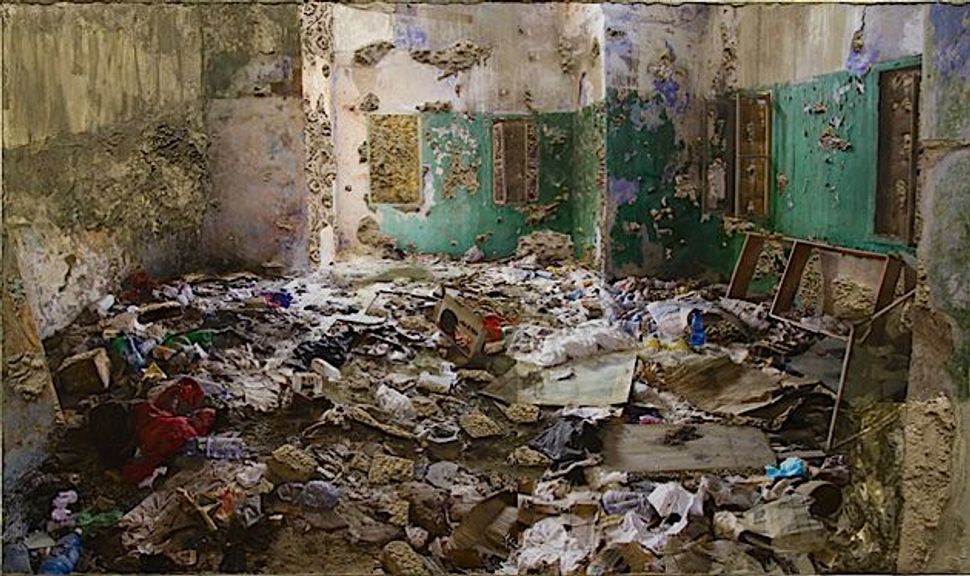 Art is a language of its own, and Naomi Safran-Hon is redefining its words. “Hard Times: Paintings,” is a small solo exhibition of the Israeli artist’s most recent work currently on display at Slag Gallery in Brooklyn. The gallery explores the evolution of mediums (Slag is a recyclable waste product in metal smelting) and celebrates the way Safran-Hon utilizes unconventional materials such as concrete, sequins and lace in order to transform worthless objects into meaningful pictures.

When the artist returned to her hometown of Haifa in Israel, she photographed abandoned interiors. While Safran-Hon does not suggest a particular political agenda, her canvases present a multitude of questions about the Israeli-Palestinian conflict. The gallery explains that the depicted spaces “have been abandoned for the past half-century following a mass Palestinian exodus — a migration whose causes and effects differ depending on the historical narrative to which one subscribes.”

The notion of destruction and reconstruction is apparent in Safran-Hon’s artistic process. After photographing the Palestinian homes, the artist stretches the photograph and places it directly on the canvas. Then, she systematically slices and punctures the photograph. These holes are covered with lace, or a mesh-like fabric, with which she pushes concrete through. The evolving picture plane becomes a three-dimensional optical illusion. The difference between the photographed concrete and the tactile concrete is almost discernible from a distance. It is only with a closer proximity to the surface of the canvas that the viewer is struck by the concrete that juts out from the canvas and into the viewer’s space.

The juxtaposition of materials — hard concrete and fragile lace — should not be lost on the viewer. The intertwined relationship of such unconventional elements speaks volumes of Safran-Hon’s ability to manipulate her materials. In fact, the artist explains that this “unique hybrid” of photography and painting, and the way that the viewer’s eye “gets stabbed by the cement pushing out through the lace” in an anti-photography gesture. It is somewhat surprising that in certain ways the fabric of the lace is stronger than the cement— a material that depends on its reinforcement in order to function.

Rather than dismissing these interiors as forgotten spaces, Safran-Hon highlights each space’s idiosyncrasies. Most paintings are comprised of two canvases side by side, like a diptych. The break between the two canvases in “Wadi Salib: Mirror Bed” (2014) emphasizes the dilapidated bed, but also functions to create an aesthetic, kaleidoscope-like effect. This clever combination of antithetical materials is especially achieved in “Wadi Salib: Glitter and Doom in Gold” (2014). Safran-Hon glorifies the depicted ruins by sprinkling layers of gold sequins above and beneath the concrete. At first, the cheap sequins look out of place, but, from a distance, the peeled and cracked surfaces glitter in the gallery light.

“Hard Times: Paintings” presents paintings that need to be experienced in the flesh. A photographic reproduction does not do justice to this artist’s craft. In a world swarming with media about the Israeli-Palestinian conflict, Safran-Hon offers a refreshingly discreet, multi-layered perspective.