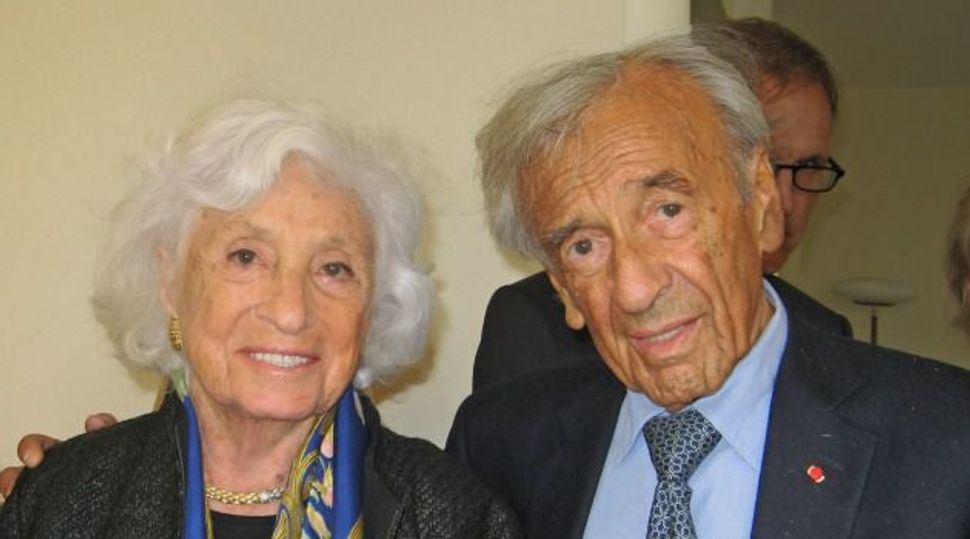 The arrival of Elie and Marion Wiesel was greeted with explosive applause by the German consular staff. Wiesel was led to the podium next to a window overlooking a breathtaking sunlit view of Manhattan with St. Patrick’s Cathedral nearby. Touting the presentation of the medal as “a humble gesture of my country showing gratitude for your lifetime achievements and relentless efforts to keep the memory alive of the worst crime in all of history—the Shoah– against the Jewish people,” minister Steinmeier declared: “With this order of Merit we want to honor the writer, the philanthropist, historian, professor, the outstanding Mentsch that you are!” During the presentation Marion Wiesel never took her eyes off Elie.

Recalling Wiesel’s “unforgettable visit to Buchenwald with President Obamaand Chancellor Merkel in June 2009, “ Steinmeier said, “I will never forget the words you said — let me quote: ‘Memories bring people together rather than set them apart. Memories are not to sow anger in our hearts, but on the contrary, a sense of solidarity…. What greatness to find such words in a place of such unspeakable terror!”

“We have taken your message into our hearts…. Over the last decades the remembrance of the Holocaust has brought Germany and Jews closer to each other…Today Israel is one of Germany’s closest allies and welcomes Germany’s role in the Middle East peace process…. Jewish people visit Germany…feel welcome in a country which has reinvented itself after the darkest chapters of its history.”

“Thank you for your words of kindness,” responded a contemplative Wiesel. “To receive a medal of recognition from Germany is not a normal thing in my life,” he said softly. “The past is here. The past is not absent from the present. We remember things that happened two thousand years ago as if they happened yesterday. Every day in our prayers we remember the good, we remember the bad. The choice, is always ours — ultimately.”

Noting, “my German students are some of my best,” Wiesel added: “Look, when we study Jewish history [it is] full of suffering, full of pain. How can you still have faith in humankind [my] students ask. Anti-Semitism is the oldest hate still here. Why? They hate us of what we are…not for what we do…. What is it that elicits such hate?”

As Wiesel and Marion joined the Jewish leadership and German diplomatic assemblage for a post presentation lunch, I managed quick — as always in Yiddish — chat with Elie as we wished each other a gut yontef.