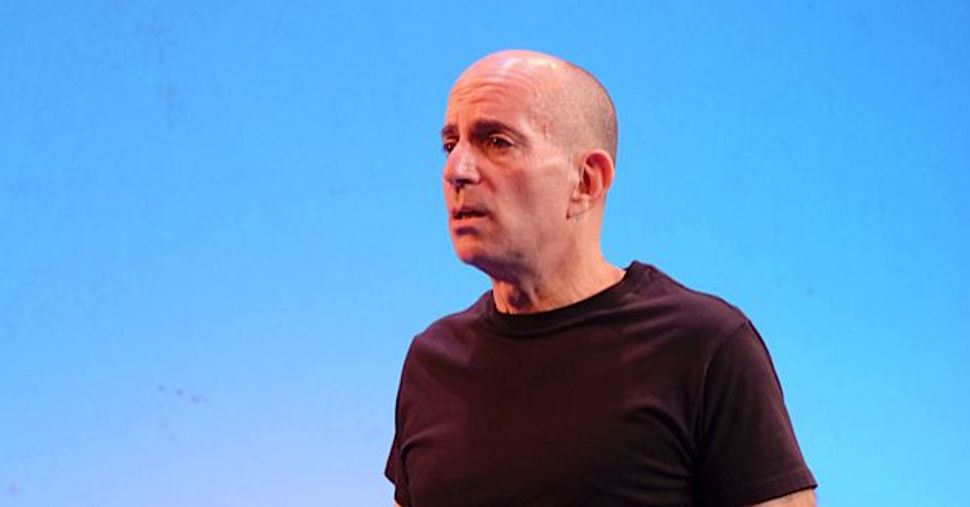 The tiny Triad nightclub in the Upper West Side of Manhattan was filled by a crowd sufficiently large to give a fire marshal palpitations. That was probably due to the fact that the night’s attraction, Brad Zimmerman, grew up across the Hudson, just a hop, skip and $14 George Washington Bridge toll away.

The truth of the matter is that it wasn’t the fire marshal who should have been worried, but the building inspector. Because the moment he began his show, “My Son the Waiter, a Jewish Tragedy,” Zimmerman had the place and pretty much everyone’s belly shaking.

“My Son the Waiter” is a one-man show, an autobiographical retelling of a life at once sad and funny. Growing up, Zimmerman had a great deal going for him. He was the best athlete in his bunk at Camp Akiba, hit a home run on the first pitch in his first Little League at-bat and, of the three colleges he applied to, decided to attend the one that accepted him.

He graduated with a degree in theater, but spent the next 29 years of his life as a waiter in restaurants, but working with a Jewish deli waiter attitude. A customer starts to flag him as he is walking to the table. When Zimmerman comes over, the customer says, “I’m in a hurry.” Zimmerman tells him, “So, go.”

Waiting on tables was a humbling experience for the college grad — and his mom. When her friends told her about their sons’ successes and giant mansions, all Zimmerman’s mother could brag about was, “If all goes well, I think Brad is gonna buy a book case.”

Zimmerman’s problem wasn’t that he went out on auditions and was turned down. It was that he didn’t even try.

“Never mind giving it my best shot, it took me almost 20 years to give it a shot. To use an apt metaphor, I was on the sidelines many years. I wasn’t even in the game. Fear got the best of me. Add to that how hard I was on myself. I had a friend who told me, ‘You’re the only person I know who can do a one-man show and not get along with the cast.’”

He ultimately went to a psychiatrist who told him it his fear wasn’t about failure anymore, it was about participation.

So he participated. He had the opportunity to work with top talent, including Joan Rivers, who called him the best comedian in his price range. George Carlin called him “F’en great.” He’s a big hit on the Florida retirement community circuit.

“My fan base right now is Boca Raton to Boynton Beach.”

But that’s going to change. He’s scheduled for a 12-week run through the end of the year at Stage 72-Triad Theatre — assuming the building inspector doesn’t shut him down. This is easily the funniest show to hit an off-Broadway stage since “Old Jews Telling Jokes.” What makes this superior is that it isn’t just jokes. It’s a life.