‘The Jews Are Coming!’ (After a Yearlong Controversy) 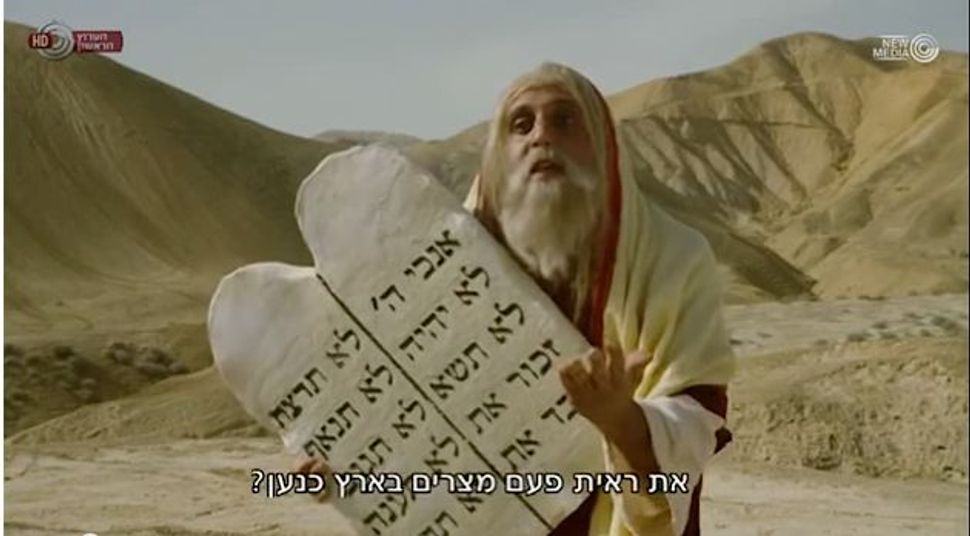 Last year, a single promo clip — a total of 19 seconds in length — provoked a controversy over the content of the show it had been created to promote. What followed was a yearlong saga of politics, professional restructuring and grassroots marketing, as the show — an Israeli sketch comedy show called “HaYehudim Ba’im” (“The Jews Are Coming”) — languished in TV purgatory.

After the controversial promo launched online, Channel 1, the public station, had a problem. The show had already been produced, using taxpayer money; despite the controversy, it represented an investment of public funding that couldn’t be easily discarded. Channel 1 was undergoing restructuring, and the Knesset had to approve the network’s programming slate before it could air. With all these obstacles, it seemed that “The Jews Are Coming” show would never get to live up to its name.

The promo also provoked MK Ayelet Shaked (from the religious Habayit Hayehudi party) to speak out against “HaYehudim Ba’im,” pressuring Channel 1 to air a right-wing satire (a show called “Latma”) to balance it, show co-creator and writer Natalie Marcus recalls. “The presence of a satire can’t balance the presence of another satire; satire balances reality,” she said.

On the question of whether the show is a left-wing mouthpiece, Marcus asserts that the show is balanced. “We ask questions about everything, from the Bible to Ben Gurion to the Ashkenazi leadership. We’re not attacking politics or saying ‘Bibi is this or that,’ we’re saying ‘this is our history.’ We go into the texts and make you think. There is a critical way we look at things, but it’s not attacking, just giving the story a fresh, modern look.”

Marcus and her show co-creator and writing partner Asaf Beiser, thinking that it would be a waste to abandon the full season of episodes, decided to do monthly screenings at a Tel Aviv bar. The event caught on with friends and friends-of-friends, Marcus recalls. “Everyone in the industry heard about it; it became a cult thing that people came and watched a few episodes. We thought it would stay like that.”

They also made a promo clip of their own, “When Are the Jews Coming?”, featuring episode outtakes and title cards that read, “we want to make you laugh, but they won’t let us,” part of the effort to drum up public demand and support for the comedy. The media buzz made an impression on Channel 1’s new management; the groundswell of support in local screenings and in the press encouraged the now post-transition network: “HaYehudim Ba’im” premiered November 7.

As of press time three episodes have aired; more than a year after the promo brouhaha, the content of the show continues to stir the pot, satirizing everyone from Abraham to Eichmann and skewering Jewish historical events ranging from the giving of the Ten Commandments to the raid on Entebbe. And if a sketch about a terrorist hijacking seems subversive, just wait until you see the sketches about Yigal Amir, who assassinated Yitzhak Rabin in 1995, and Baruch Goldstein, who murdered 29 Palestinians as they prayed at the Cave of the Patriarchs in 1994. (These sketches are not currently available with English subtitles.)

But beyond the sensational aspects of these sketches, there is a deep passion for uncovering tradition and taking ownership of Jewish history. “Traditionally, there is a separation between the secular and religious,” Marcus says. “They [the religious] have the ownership on this story, but they are our stories as well. This is our heritage and no reason we can’t deal with and dig into the material of what made us, our DNA. It’s time for secular people to own the stories and tradition again.”

This call for secular reclamation of Jewish identity and heritage is part of a national trend in Israel. In Jerusalem, the New Spirit youth movement is working to transform Jerusalem into a pluralistic and creative community. Tel Aviv, the stronghold of secular Israeli life, now offers beachside Friday night services by Beit Tefillah Israeli and course offerings at Alma, a secular yeshiva (founded by now-Knesset member Ruth Calderon). In these and other spaces, today’s young secular Jews reclaim their identity, and see Judaism as part of their heritage, even if their mode of connection would never get an Orthodox stamp of approval.

“The Jews Are Coming” is part of that revolution; after the show premiered, Marcus and Beiser went to the Knesset to present their project to a secular beit midrash (house of study) presided over by Calderon, — perhaps predictably — is a fan of the “HaYehudim Ba’im” approach. And the writers were surprised by the “openness and acceptance” that they found there, even among the more religious members of the regular study group.

“The beit midrash always focuses on Jewish texts,” Marcus explains, “but she [Calderon] invited us because she believes that the way to bring the younger generation and secular to the holy texts is to just let them do their interpretation.”

‘The Jews Are Coming!’ (After a Yearlong Controversy)