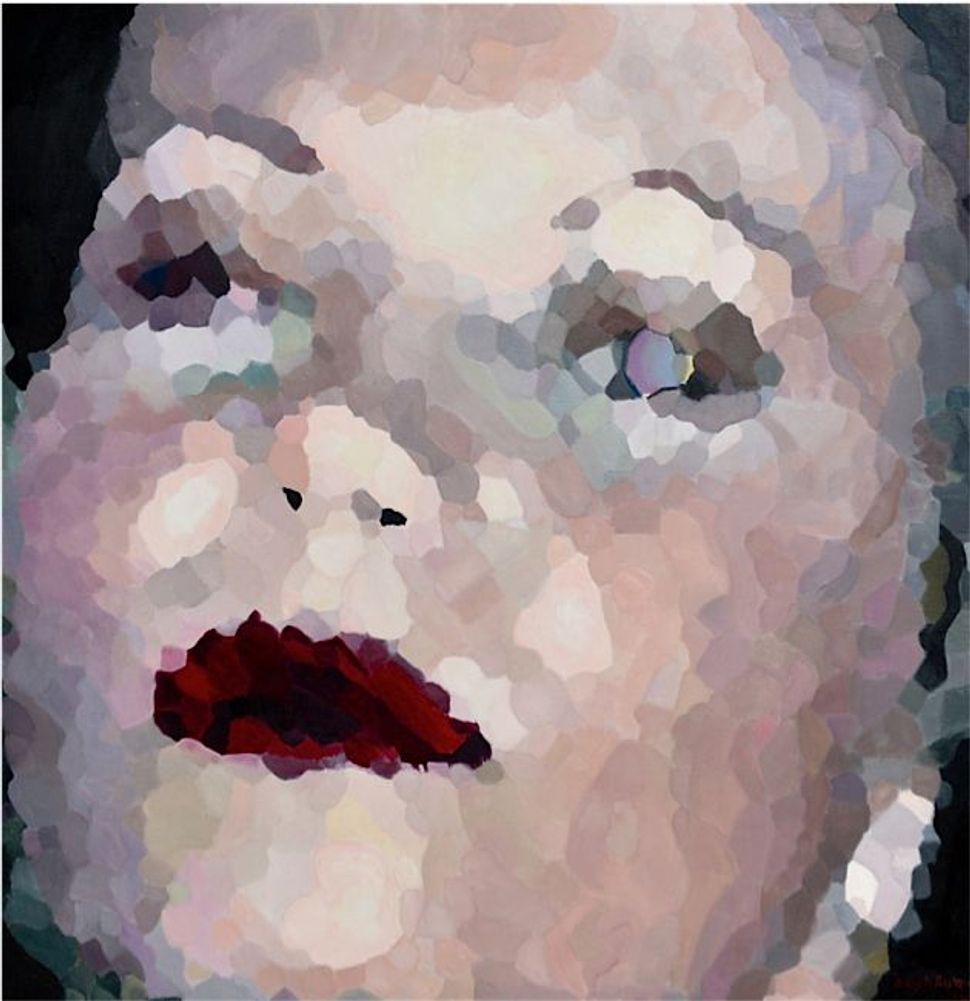 Red on black on crimson on white. Repeatedly layered color arrangements are typical in the work of Anya Rubin, especially when the Russian-born and New York-based artist is depicting her friend’s wine-stained lips or glittering eyes on a canvas. In this way, Rubin’s paintings produce interlocking patterns of abstract color studies that double as portraiture. Two of Rubin’s recent portraits were recently on view at Onishi Project’s current group show in Chelsea.

Titled “Images of Nature and the Nature of Images,” the exhibition explores the representation and function of the image, a Herculean task. The 11 artists’ work ranges from photographs to paintings to sculptures, but the variety in the show barely begins to decipher the age-old question of imagery’s presence and potential in our oversaturated world.

What the show lacks in answers, however, Rubin’s paintings provide in investigation. Do we see color before we see shapes? These two elements intertwine in Rubin’s patchwork painterly effect. Do two circles on a face always correlate and translate as eyes to the viewer? There are too many circles to count on Rubin’s paintings, but the eyes are immediately recongizable. Do we feel convinced or distracted by the illusion of depth depicted on a flat surface? This list of questions can become endless the longer the viewer looks at Rubin’s paintings.

It should come as no surprise that Rubin is infatuated with the way individuals represent themselves on social media. She uses this manipulated self-identity as an inspiration in her portraits. In this regard, Rubin’s painting, “Natalia,” (2014) depicts the artist’s good friend in a way that invites the viewer to question and challenge the idenitity of the model and the way her somewhat distorted facial features represent her.

Upon closer observation, Rubin’s artistic process parallels the “touched-up” culture of self-representation of the twenty-first century. First, Rubin photographs her model. Then she edits the photograph in Photoshop before she even touches the canvas with paint. This process highlights the multiple technical stages of Rubin’s layered imagery. Notice the way the lips fall off the face when viewed up-close, but also anchor the facial features together on the surface of the canvas. The simultaneous push-and-pull of the pigments and lines throughout the composition keeps it engaging for its viewers.

When viewed from a distance, the multiple color arrangements (reminiscent of choosing from similar but specific color swatches) construct a face, and an especially elegant one. The model’s face is depicted with an air of sophistication, seen in her choice of makeup and large diamond or pearl earrings. Since the face is viewed from slightly below the turned-up nose and far-off sparkling eyes, the viewer is at once at the beckoning of the model.

Rubin admits to only painting people that she knows well in order to capture their personality, and yet, it is clear that she is creating more than a perfectly realistic portrait of a familiar face. In fact, Rubin explains in an interview with the author that she chooses color based on the feeling she gets from her model. “Color for me describes the emotion and personality” of the subject, she said, which trumps the naturalistic coloring of such faces. The cool color palette utilized in “Natalia” becomes even more enticing within close proximity to the surface. So many blues and greys overlap and blend in swift circular strokes to depict a unified portrait eager to be simultaneously dissected and decorative.

Like many artists today, Rubin is referencing the techniques of art movements (the visual aesthetic of Pointilism and Impessionism are particularly noticeable in her painting) of the past, but also harnessesing the commercial aesthetic of social media in her work. The cropped and expanded composition in “Natalia” reflects the common format for Facebook profile pictures. Confronting the selfie obsessed population, Rubin’s portraiture addresses our complex visual experience of facial recognition. Furthermore, Rubin’s paintings emphasize our acceptance and desensitization of distorted self-representation.