When Charlie Hebdo Lampooned Jews Too 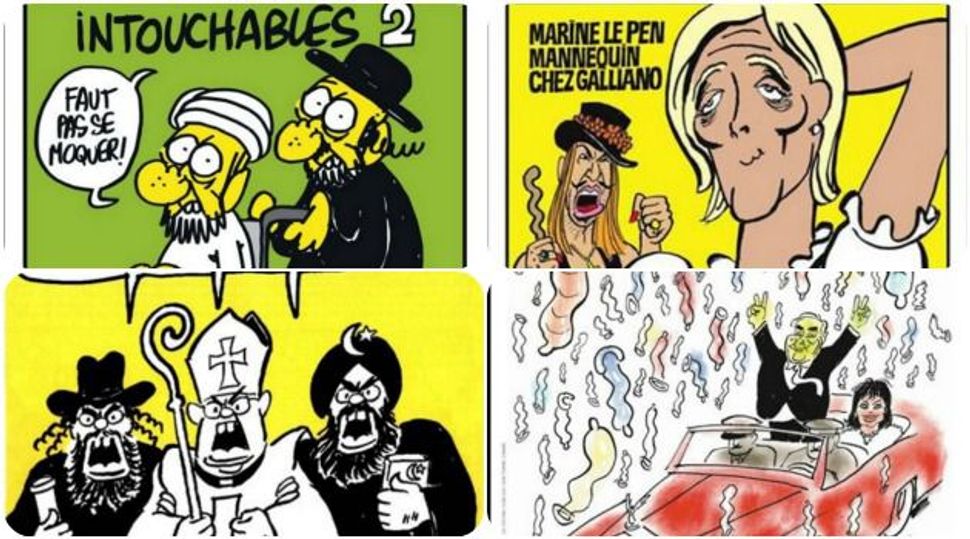 On January 7, three gunmen open fired at the offices of French satirical magazine Charlie Hebdo, killing 12 people, including two police officers. Four of France’s most celebrated cartoonists Charb, Cabu, Wolinski and Tignous, were among the victims. It’s easy to speculate about what sparked this deadly attack. Charlie Hebdo wasn’t exactly known for its tact or subtlety — in November 2011, the publication’s offices were firebombed a day after publishing a cartoon depicting the prophet Mohammed.

But it would be a mistake to think that the popular magazine only targeted Islam. It thumbed its nose at everyone, reflecting mostly the bad and the ugly, but also the good, of French society as a whole — Jews included. Here are a couple of examples:

An Orthodox Jew, the Pope and an Imam yell: “Charlie Hebdo must be veiled!”

In this parody of the hit French film “Les Intouchables” (The Untouchables) an Orthodox Jew pushes around the prophet Mohammed. The text reads: “Don’t make fun.”

This series called “The Torah Illustrated by Charb,” makes light of the Jewish commandments. This particular cartoon reads: 68. “Men will not shave the hair on the sides of their heads.” The man in the cartoon says: “You can shave your brains but not these!”

Charlie Hebdo acknowledged Dominique Strauss Kahn’s arrest on allegations of sexual assault by depicting him as a newly elected French president, parading under a shower of condoms.

When Charlie Hebdo Lampooned Jews Too