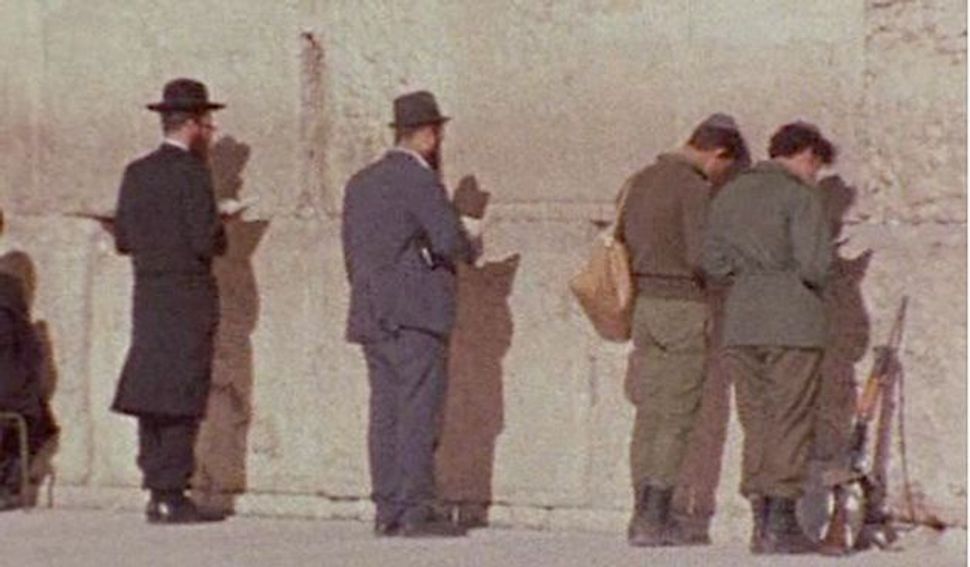 In October and November 1973, during and shortly after the Yom Kippur War, Susan Sontag travelled to Israel to make a documentary film entitled “Promised Lands.” The movie constituted a mere coda in the recent HBO documentary about her life and work, “Regarding Susan Sontag”, which as Gabe Friedman noted in his review “leaves out a detailed discussion of her work.” Since “Promised Lands” is the principle testament by which Sontag’s view of Israel can be judged, it warrants re-watching.

Upon its initial release in 1974, “Promised Lands” was panned by The New York Times. Israel’s “situation is just too factually complex to be treated as a tone poem,” Nora Sayre wrote, arguing that “the viewer almost has to function as an editor, since the selection of the footage is so haphazard.” The movie “won’t increase your understanding of Israel. Perhaps the latter should have been a book instead of a film,” the review concludes rather sniffily.

This judgment is fair in some senses. It is certainly true that “Promised Lands” won’t increase anyone’s factual understanding either of Israel itself or the wider conflict with its Arab neighbors. But it is not Sontag’s ambition to provide context and explanation for the Yom Kippur War. Rather, as Leon Wieseltier observed, “there are endless shots of desert (read: Nature) and corpses (read: History), and a host of cute juxtapositions of the old and the new which look like El Al’s TV commercials and which add nothing to our understanding of the situation.”

That the movie doesn’t add anything is perhaps because Sontag doesn’t seem to have much of a handle on the texture of Israeli society and the contours of the conflict. She comes across not so much as a director but as a tourist in her own subject. For example, Sontag as a camera is repeatedly drawn towards the Western Wall. It could be argued that, six years following the liberation of the Wall and the opening of the space around it, it was entirely natural to feel the Wall’s mysterious pull. But to focus on the Wall is to present a narrow conception of what Israel actually is.

More than that, in terms of the faces she captures, Sontag seems fascinated photographically by two groups within Israel, neither of whom are representative: Orthodox Jews, and Bedouin herders. In both, Sontag has found two peoples who are the mirror image of herself and the milieu in which she lived. They are the weird, the mystical, and the exotic, attached either to the land or to God. While it would be vulgar to do so, there is a case to be made that Sontag here is guilty of indulging in Orientalism.

Where “Promised Lands” does succeed, however, is in presenting and capturing a mood, which she achieves in two ways. One is through the voice of the late Israeli writer Yoram Kaniuk, whose thoughts spread over the imagery and which is counter-balanced by the opinions of physicist Yuval Ne’eman. Kaniuk is the voice of conscience, and with the gift of retrospection he is an aware and prescient one, providing warnings of Israel moving away from the values of equality and social solidarity, and of how the Yom Kippur War shook up the younger generation and undermined their faith in their elders and the Mapai establishment.

“The Jews know drama; they don’t know tragedy,” Kaniuk says repeatedly, as a leitmotif throughout the movie. The tragedy in question is that the land of Israel was twice-promised: once to the Jews, once to the Arabs. “It became like a tragedy: we were right, and they were right, and we fought and fought and fought. The end of it is either that one will destroy the other or that we live in some sort of a compromise.”

The other way Sontag captures mood is through imagery. “Promised Lands” is an anti-war movie, or more specifically, it is against the cycle of violence that marks the Arab-Israeli conflict. Sontag pokes her camera in the faces of charred bodies, burnt-out tanks, and abandoned school buildings. She also succeeds in showing Israel’s fragility after the Yom Kippur War. The movie’s final sequence takes place in a post-combat rehabilitation clinic; patients writhe as doctors slam their beds, bang drawers, and shout orders in order to simulate the sounds of war. For this, “Promised Lands” was banned in Israel in 1974.

“‘Promised Lands’ hardly tells all the truths there are about the conflicts in the Middle East, about the October War, about the mood of Israel right now, about war and loss and memory and survival,” Sontag said in a 1974 article for Vogue published about the making of the movie. “[B]ut what the film does tell is true. It was like that. To tell the truth (even some of it) is already a marvelous privilege, responsibility, gift.”