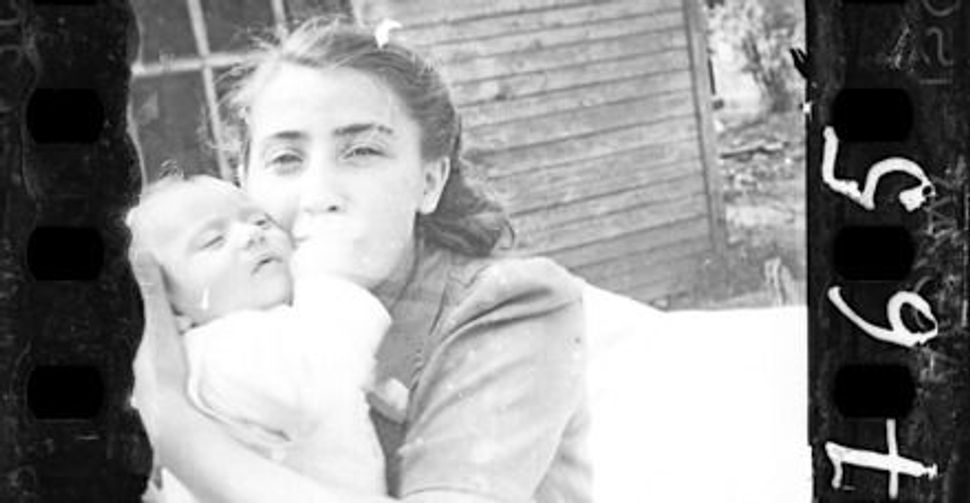 Henrik Ross’s camera helped him survive the Holocaust. As an “official” photographer of the Lodz ghetto, he took photos for Jewish identification cards, and documented scenes the Nazis would use to promote the ghetto’s efficiency and industry.

The images themselves almost didn’t make it. Ross buried them when the ghetto was liquidated in 1944; when he returned a few months later, only half of his 6,000 negatives had endured. More than 200 of those images went on display last month at the Art Gallery of Ontario, where “Memory Unearthed: The Lodz Ghetto Photographs of Henryk Ross” will run through June 14.

“The piles of clothes and corpses had become iconic images to portray the murder of the Jews,” said Maia Sutnik, the AGO’s curator of photography and organizer of the exhibition. “But these images of life in the ghetto, the day-to-day horror of what it was like to survive, are very important. They shed new light on the tragedy of six million Jews.”

Sutnik has also edited a companion book to the show, published by Yale University Press, which features photos, documents, and other archival material from the AGO’s permanent collection. The museum acquired Ross’s negatives in 2007.

In her cluttered office at the museum, Sutnik shared her thoughts with the Forward on some of the exhibition’s most powerful images:

“In 1940, the Lodz Ghetto became hermetically sealed – divided in two. Zigurska Street was the Aryan street – Jews couldn’t walk on it. Wooden bridges were built so Jews could cross between the two sections of the ghetto.

When Ross took this, the Nazis had not yet put restrictions on photography. He didn’t have to take this picture surreptitiously, like so many of his photos. After 1942, when there was a huge acceleration of sending people to extermination camps, it became much more restricted.”

“Ross’s first job was to provide pictures for work identification cards and other permits. He tried to save film in a very clever way — he would line people up, put boards between them, and then crop the printed photos. Without ID cards, you couldn’t work. And if you didn’t work, you didn’t eat.

Jews from other parts of Eastern Europe were arriving in the ghetto to replace children and the elderly, who were send to Chelmno. All of these new arrivals needed ID cards.”

“This is quite a tragic picture. Only one boy looks at Ross. He seems frightened. To the Nazis, children and the elderly did not have purpose in terms of labor. The Nazis asked for 20,000 children to get removed from the Ghetto. [Lodz ghetto leader Chaim] Rumkowski’s famous ‘Give me your children’ speech presented the situation to parents as a sacrifice for the greater good.”

“This company made mattresses. Stuffing was made from wood shavings almost as fine as wool. Ross was required to photograph this scene to showcase the industriousness and efficiency of the ghetto. It’s a good photojournalistic image of workers in the process of making the fill.”

“Ross himself titled this photo. It depicts survival on the street — with pails, bowls, tin cans, you could get your ration at a soup kitchen. None of these photos were staged. Photos like this are not images the Nazis wanted to see.”

“This is a powerful picture. Human beings were beasts of burden in the ghetto. Bread was the most desirable staple. We should note that there’s no documentation about any of the peripheral figures in photos like this.”

“This is a terrifying picture. You can read it a number of ways, especially since it was taken around the time of the edict for parents to give up their children. Is it a picture of adulation, or of consoling? There is some kind of dialogue here, some kind of emotion between mother and child. Is it an impending loss? In the Lodz ghetto, it didn’t matter whether you were part of the Jewish police or any administrative body. Your life was in peril.”

“Ross took a lot of pictures of children. No one knows anything about this child, though. It’s a wonderful image — she still has a bow in her hair, trying to look tidy and lovely. In the early years of the ghetto, there was a children’s colony called Marisin, with schools and orphanages. Eventually, if you were under 10 years of age, you were deemed of no use for labor. Many children were sent to Chelmno from the ghetto.”

“On a tract of land in the ghetto, student Zionists tried to cultivate small crops. They put up this scarecrow, but the irony is it’s a Jewish scarecrow, with a Star of David. The issues of food and starvation emerge from this picture. They did try to grow food and till the land. They even had chickens.”

10. Man walking in winter through ruins of synagogue

“In 1939, the Nazis destroyed all but one of the synagogues in Lodz. This was the most famous one. Ross was making a symbolic statement through photos like this. There’s a story he needed to tell.”