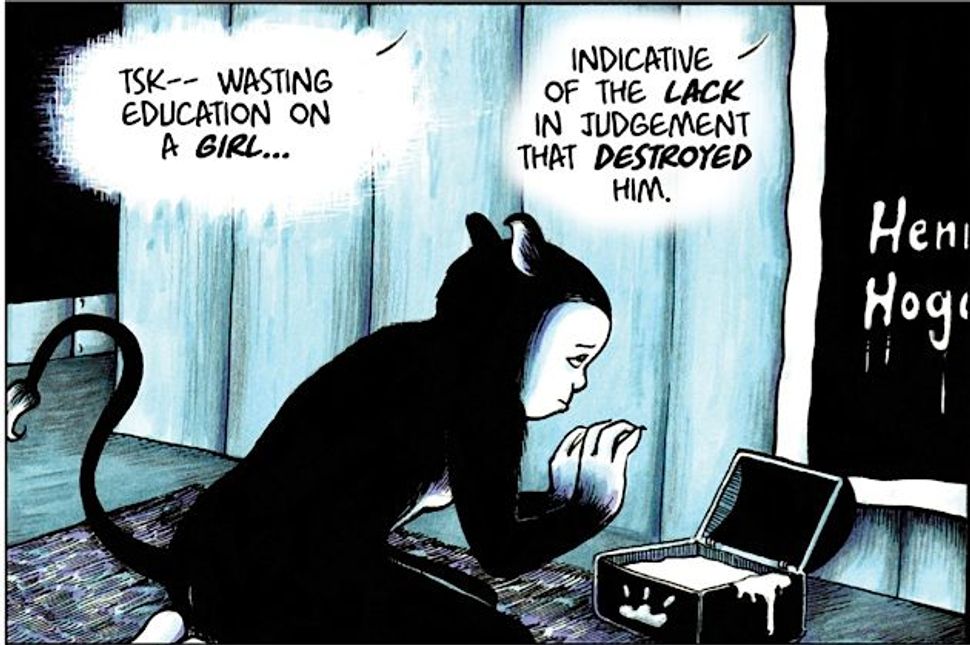 Miss Lasko-Gross’s shrewd, poignant “Henni” (Z2 Comics) arrives at a charged moment for cartoons and religion. In the graphic novel — a marked departure from Lasko-Gross’ acclaimed autobiographical comics “Escape from ‘Special’” and “A Mess of Everything” — the female lead abandons her village in a quest for knowledge. The blind followers, cynical leaders, and “disruptors” she meets along the way enact a sly parable for the chains of religious absolutism — and the book sounds a call to reject mindless submission to dogma of any kind.

Lasko-Gross’s painterly style and unflinching eye make “Henni” as hard-hitting as it is heartrending. And like all of her work, it avoids easy answers to complex questions. The artist spoke to the Forward from her home and studio on Manhattan’s Lower East Side. Full Disclosure: Lasko-Gross is one of the artists in “Graphic Details: Confessional Comics by Jewish Women,” the traveling exhibition which I curated, and the Forward sponsored.

Michael Kaminer: Resistance to religion is at the center of “Henni”; has the Charlie Hebdo attack galvanized your feelings around the message and the medium?

Miss Lasko-Gross: The murders at Charlie Hebdo, though shocking, fit into an all-too-familiar pattern of violent religious fundamentalism. Those who “know” that their beliefs are beyond the criticism and mockery all others grudgingly accept as participants in the 21st century. For me personally, absolutely nothing has changed except for this perennial wound being torn open once more.

You’ve earned stellar reviews for your autobiographical work. What led you in such a dramatically different direction?

There are a couple of reasons I didn’t immediately start a third auto-bio graphic novel. For one, I think I’d like to have the distance/perspective of being 40 before tackling a book about my 20s. Also, the most important reason is that my heart wasn’t in it. “Henni,” although started as a side project, was where my passion and interest was. Comics take so long to complete and provide such relatively small remuneration that it’s ridiculous to work on anything you’re not in love with. Finally, and somewhat trivially, there’s only so many times you can draw your own stupid face before you need a break.

Henni’s world looks and feels very particular. What mythologies inspired the universe you created for her?

Every facet of her world, both physically and philosophically, is a mashup of at least three cultures, meant to be familiar and yet un-placeable. Her village, for example, has traces of Medieval Europe, Scandinavia and pre-Colombian South America. The religions, likewise, contain features and variations on ideas found in a multitude of religious traditions from our own world.

We’ve seen a raft of memoirs recently from ex-Orthodox women. Is it a stretch to see Henni’s story as analogous?

I was thinking about ex-Orthodox women, FLDS [Fundamentalist Church of Jesus Christ of Latter-Day Saints] survivors as well as the ex-Amish. I think it takes nearly unimaginable bravery to not only abandon your entire support system but enter “naked” a world you have no preparation for.

Henni didn’t necessarily want to abandon her home and family but couldn’t continue living a lie. When she uncovers the corruption of their Templemen her first instinct is to tell everyone so that they may all live in truth together. She has no choice but to flee her village though, when her attempts at discourse are met by a mob who’d rather stone her to death than hear an ugly truth that challenges their belief system.

You’re now a mother. Did the desire to tell a kind of fable come out of the wish to give a story to your young son, Charles?

For now he’s content flipping through the art and making up his own story, I do hope that when he’s older and has the appropriate reading comprehension, he likes it just as much. He may someday be a surly teen who finds everything I do hopelessly embarrassing but I hope the story will resonate with him.

I became a mother while working on “Henni.” I think the greatest impact on my writing was the perspective it afforded me of parental love, in a way it made the characters of Henni’s parents seem more monstrous. My parents are wonderful caring people who saw the child I was and encouraged me to express myself as an individual. Henni’s parents, by comparison, are of the type who wish to live through their child. [Henni’s father] Hedrik wishes her to be educated and expects her to scorn religious people (including her mother) as he does. Her mother expects her to be quiet and obedient, follow the Templemen no matter what they demand. They both love her deeply in their own narcissistic way, but fail to appreciate the person she is, as opposed to an extension of themselves and their ideological battle.

How much of Miss is there in Henni herself?

There is a parallel you can draw between our respective philosophies/world views. My distaste for organized religion, her doubts. but Henni hasn’t had the privilege of growing up in a comfortable liberal Jewish suburb, of reading what she wants or of having an outlet for her questions. She’s very naive, but you cannot fault her for that, given the isolated nature of her upbringing.

Henni carries some pretty damning messages around religion and women. Did growing up Jewish influence how you presented the belief systems in the book?

Although Henni is certainly critical of organized religion in general, it should be noted that it’s the inflexibility and suppression of reasonable debate that’s being condemned, not people’s harmless personal beliefs. That said, as someone who enjoys reading about comparative religion and anthropology, it’s striking how every culture/ religion seems to have their own unique excuses for treating women as property and subordinates, often masked in the language of respect and honor. Growing up I had friends from homes far more Orthodox than mine. The separation between men and women, the roles they were offered certainly didn’t escape my attention.

Is it also a stretch to say that the role the Disruptive One plays is a role that Jews have often played in society, as artists or performers who say and do what others won’t?

Though the “Disruptor” is blinded for creating secular art, she refuses to quit and switches to the medium of sculpture. She is the uncompromising artist, the one who can’t stop expressing herself no matter the cost. I suppose you could argue that the Jew, as the perpetual outsider, is in a unique position (similar to the Disruptive One) to comment on the mainstream of society.