A Chat With the Writers/Directors of ‘Gett’ 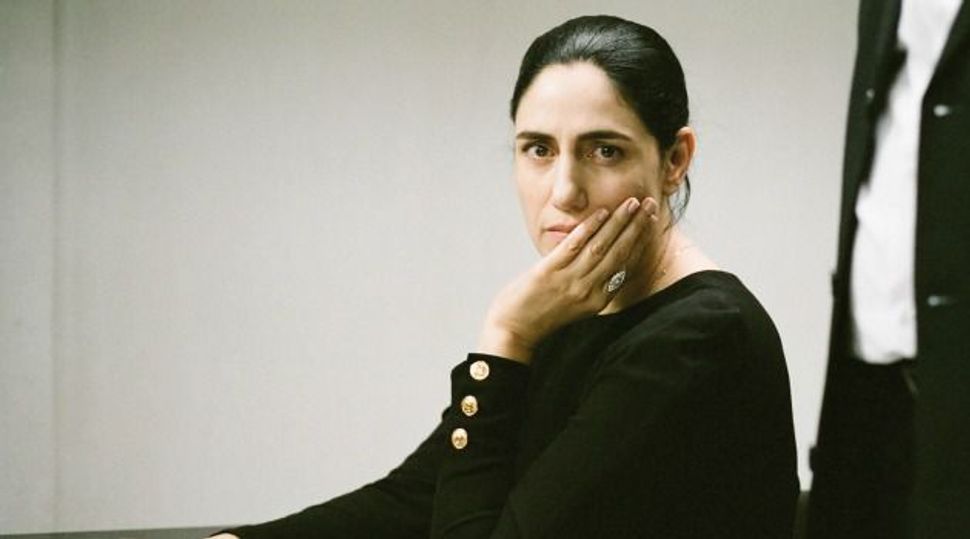 I don’t recall ever feeling as angry as I was after seeing “The Gett: The Trial of Viviane Amsalem,” the blistering gut-wrenching must-see film by writer/directors Ronit and Shlomi Elkabetz.

Warmly ensconced at The Regency Hotel during one of New York’s recent snow-ins, the Elkabetz siblings alternated in answering my questions about the film’s heroine Viviane’s (Ronit ) attempt to divorce her husband Elisha (Simon Abkarian) following a 20-year untenable and loveless marriage. Not sure who angered me more: the rakhnomes-lacking didactic religious judges in the claustrophobic courtroom or the neighbors and relatives who, in Rashomon style, proffer their spin on the couple’s marriage that should long ago have been aborted.

“There are over 450,000 still open cases in Israel – some wait for twenty years to be adjudicated,” Shlomi told me. “It covers the full spectrum – every woman in Israel, secular or Orthodox, has to go through it if married and registered in Israel… There is a sense of God is punishing mei… Women are treated like property.” Commenting on the image of the Israeli woman as modern, a kibbutznik, soldier, bikini-clad beach lounger? Shlomi said, “When it comes to divorce there seems to be a democratic mantra – a gett is a gett.”

“The idea was mine,” volunteered Ronit. “I wanted to understand, to research…. it disturbed me. We had an idea to follow this woman’s life through different stages between herself and the state (Israel). But the woman’s place in this community is to submit…not show her hair, be modest.” Watching the film’s years-long delay after delay without a verdict, I flashed back to the film “Shawshank Redemption” in which, like Vivian, Morgan Freeman is asked year after year if he has repented yet and, irrespective of his reply, is denied parole.

I asked actor/director/writer Ronit – whom I first met in the delightful Israeli film “The Band Visit” – about her change of wardrobe when toward the film’s end– after years and years of soul numbing denials by rabbi-judges – the black-clad Viviane appears in court sporting a blood red shawl and flaunting her below-waist long loose hair. The film’s stark courtroom, Ronit told me, was actually much nicer than those it was modeled after. “She had no more energy,” said Ronit. “The red clothing revitalized her, woke her up. But she did not know that on that day she would be accused of being unfaithful. Caught between two rabbis she forgets herself…. it was not a provocation! Gett denied!”

“The reactions are different from age to age,” said Shlomi. “For young people it’s an occasion for rethinking about marriage …and a gett…. The Rabbinic court is so strong and political, but,” he told me: “Three hundred rabbis will be watching the film…the first time in Israeli history [they will] discuss the issues. It’s extraordinary.”

A winner of more than seven 2014 film festival awards – and most recently a selection at the New York Jewish Film Festival– “Gett” opens on February 13 at Lincoln Plaza Cinema and other area theatres. Go! Applaud Ronit, tsk, tsk the judges and hiss her husband.

A Chat With the Writers/Directors of ‘Gett’