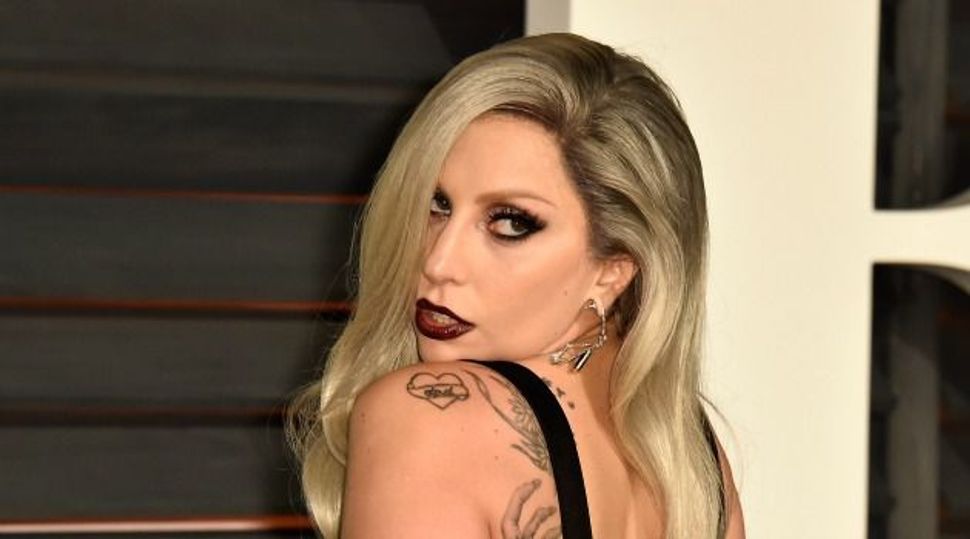 I was a little harsh on Lady Gaga when, half-joking, I accused her and Tony Bennett of mugging our dear Jewish diva Barbra Streisand at the Grammys.

Today, I am singing Gaga’s praises for turning around what had become the Debbie Downer Academy Awards with an exuberant “Sound of Music” montage celebrating the 50th anniversary of that most Jewish of Hollywood musicals.

Until that magic moment, I almost forgot the reason many Americans tune in to award shows: to be entertained. In the spirit of Jewish funny lady Rachel Dratch’s most-famous SNL character, I was pretty sure I was sitting through a four-hour political polemic.

Host Neil Patrick Harris got the ball rolling with an unfunny and unfortunate quip about the whiteness of the show’s list of nominees – a huge controversy this year.

“Whiplash” star J.K. Simmons just made me feel sad when he used Best Supporting Actor Oscar speech to tell me what I don’t need more guilt for not doing “Call your mom, call your dad. If you are lucky enough to have a parent or two alive on this planet, call them …. Tell them you love them and thank them.”

When Common and John Legend won the Academy Award for best song “Glory” from Oprah’s “Selma,” they urged activists to “march on” because “struggle for justice is right now,” Legend noted : “We live in the most incarcerated country in the world. There are more black men under correctional control today than were under slavery in 1850.” –Best Actress winner Julianne Moore, who portrays a woman with Alzheimer’s, used her “Still Alice” win to call attention to the mind-robbing condition and the accompanying stigma.

After Patricia Arquette’s “Norma Rae moment” calling for equal rights for women and higher wages for the working class, I was even inspired to tweet my need for a different view on things from Fox.

Arquette had speech-in-hand, on a full page she unfolded on stage, when she won Best Supporting Actress for her role as the mom in Richard Linklater’s “Boyhood.’

“To every woman who gave birth to every taxpayer and citizen of this nation: we have fought for everybody else’s equal rights,” said the Jewish Arquette. “It’s our time to have wage equality once and for all and to fight for equal rights for women in America.”

It was the rapture for fellow nominee, Meryl Streep (Into the Woods), and Jennifer Lopez, who leapt from their seats in lock-step endorse

in which meryl streep and jennifer lopez are me pic.twitter.com/jFUuxMJCls

I was humming “We Shall Overcome” and about to sign up with Occupy Wall Street when Gaga took the stage.

Her renditions of several classics from the Jewish writing team of Richard Rodgers and Oscar Hammerstein in the Jewish-directed (Robert Wise) “Sound of Music” were amazing. Especially Gaga’s take on Mother Superior’s “Climb Every Mountain” was, in a word, wow.

Then, to top it all off, actress Julie Andrews, who won Oscar for the movie, came out and hugged Gaga.

Now don’t get me wrong. Activism in politics is very much in the Jewish tradition. Arquette embodies that and is to be commended for matching her words with real action.

She is founder of givelove.org. an international public health foundation pressing for projects that improve sanitation & clean water.

Many of us, myself included, stand on the shoulders of activists who fought hard for issues like universal healthcare and marriage equality.

There is no doubting the passion of every other star who spoke out. And at some moment, it all felt like too much. It’s hard to tell folks who care – and want to make a difference — that there is a time and place. But when the Oscars start readying the 88th annual awards next year, remember this: There is a time and a place.