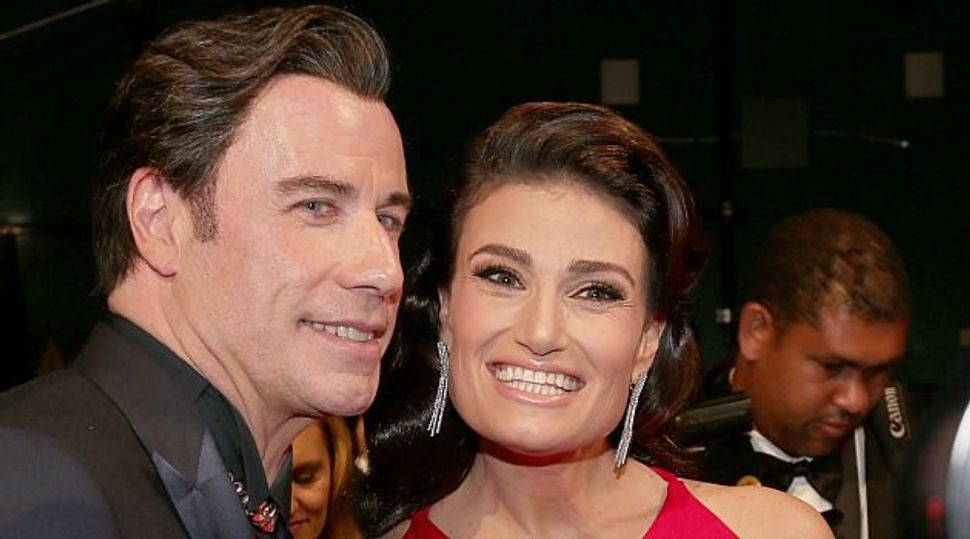 All in all, it was a decent night for the Tribe at the 87th Academy Awards.

Among the high notes:

IDINA’S REVENGE: Last year, John Travolta botched the name of Idina Menzel our second-favorite Jewish diva (after Barbra). This year Adele Dazeem got her revenge as the two collaborated to present best song to Glory. “Ladies and gentlemen, please welcome to the stage my very dear friend, Glom Gazingo,” Menzel said in what was the funniest bit of the night.

TRIUMPH OF ‘IDA’: The black-and-white drama, a story about what happens when a woman about to take her vows as a Catholic nun finds out she’s really an Old Testament gal, won best foreign-language flick. And director Pawel Pawlikowski took home the informal category of best acceptance speech as he refused to be rushed off the stage by Oscar’s orchestra. He talked over them with a hilarious bit of extra thank-you’s, shutting the exit guides down.

SCARLETT’S TWO-FER: The talented Jewish beauty introduced the event that saved the night: Gaga singing The Sound of Music. And then there was the “if-looks-could-kill” moment earlier on the red carpet, where she all but rolled her eyes when Travolta snuck up behind her and stole a kiss.

AWESOME ADAM: Maroon 5’s Jewish frontman Adam Levine brought the house down with his distinctive voice and wondrous staging for him and his band to sing “Lost Stars,” the Oscar-nominated siong from musical drama “Begin Again.”

ANIMATED ANDY: “The Lego Movie” may have been snubbed in Oscars animation category, but our favorite Jewish SNL alum Andy Samberg helped make Tegan and Sara’s performance of the flick’s nominated song, “Everything is Awesome,” the most madcap moment when he and his comedy-music troupe The Lonely Island, joined in.

B-PLUS FOR ‘BUDAPEST’: “The Grand Budapest Hotel” topped the field with nine Oscar nominations — in a tie with the winner of the major awards, “Birdman.” ‘Budapest,’ inspired by the writings of Austrian-Jewish novelist Stefan Zweig and produced by Jewish powerhouse Scott Rudin, slinked away with four of the lesser categories: costume and production design, score, and makeup/hair.

PATTY’S ‘Norma Rae’ MOMENT: Jewish star Patricia Arquette’s best supporting actress win for “Boyhood” made us happy. And her speech demanding equal rights and pay for women was the big talker of the night.

But there was one thing that infuriated us:

JOAN GETS DOUBLE-DISSED: The late Jewish Queen of Mean, Joan Rivers, was left out of Oscar’s “In Memorium.” And her brand of runway coverage got a major thumbs down from major Hollywood actresses supporting the #Askhermore campaign being pressed by “Girls” creator Lena Dunham, who is also Jewish.