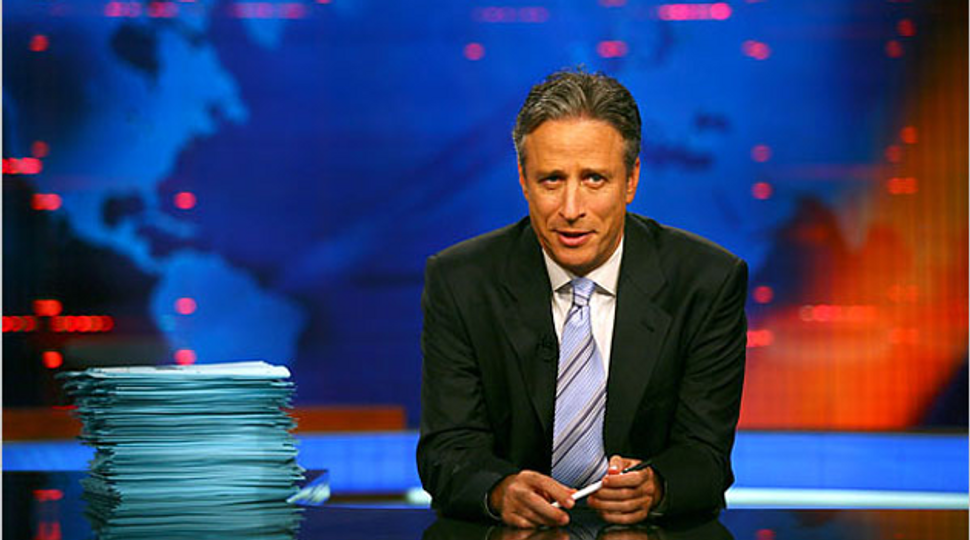 In a long, in depth interview that covered the span of his career as a performer, director, and show creator, Jon Stewart appeared at a live performance in New York City with comedian Catie Lazarus and discussed the reaction to his announcement last week that he was stepping down from the helm of the hugely popular news satire program The Daily Show.

It was a very Jewish exchange – Lazarus, like Stewart, mines her ethnic background frequently in her comedy and has published articles in a number of Jewish publications. Her show and podcast “Employee of the Month” which takes place at Joe’s Pub in the New York Public Theater regularly hosts celebrities and other guests who come onstage in front of the cameras and talk about the nuts and bolts of their work. The podcast video was billed as “An Uncircumcised Interview with Jon Stewart.”

In it, Stewart assured Lazarus, (who called him a “total mensch” for making the appearance) that he was not about to disappear from America’s television screens. “I’m not retiring. I’m not putting on the black socks and heading down to Boca. No – There’s no retirement.”

One of Lazarus’s first questions to Stewart was: “Do you feel like since your retirement that you have a zillion Jewish moms who are like ‘What are you doing, what are you eating? Is he eating? What should I prepare for the next meal?’”

He replied: “You know, I had a thousand Jewish moms before I announced anything – when you do a show about current events…” And he imitated one of his critics in a typical New York yenta accent: “So is that REALLY whatcha think about Israel?”

Then, as himself, he tried to explain that “it’s just something we came up with on the show…”

He then interrupted himself as his yenta alter ego and began lecturing: “I’m just SAYING – you should educate yourself on the settlements. That’s all I’m just saying – you’re not EDUCATED. I noticed you worked on Yom Kippur. I mean, I didn’t SAY anything, I don’t know why you did it – it’s just – you have children, I know your wife – god forbid – is Catholic, but still …”

In another exchange in the 45-minute interview, when discussing the hostile Iranian reaction to his film “Rosewater” which dealt with the treatment of an Canadian journalist there, Stewart noted: “They produced a 60 Minute-style news piece on me in Iran that ran on Iranian state television that explains that I was a CIA and a Mossad agent. I actually sent that to my mother and said ‘How can a Mossad agent hate Israel? I work for their intelligence service!’“

Stewart arrived looking relaxed to the show, which was performed in front of the packed pub and theater, wearing a T-shirt and gray hoodie under a leather jacket. He discussed his career highlights in detail, including his experiences working as a movie actor and director, but most of the shop talk had to do with the creative process of producing the Daily Show. “I’ll miss the experience of making it more than I’ll miss the experience of presenting it,” he said.

Still, he said it was time to move on. “I feel like the tributaries of my brain combined with the rigidity of the format – I used every permutation of that that you could possible use. You can only go so far with four facial expressions and five to seven curse words – like there’s only so many iterations of that you can do.”

He said he was excited to see others take what he had done forward using their own talents, noting protégé John Oliver’s success on HBO with the new hit Last Week Tonight.

But he said his primary motivation for leaving the show was his need for a schedule that allowed for more time with his family.

“I literally just needed more flexibility. I’ve got maybe four or five years with the kids before they really don’t want anything to do with me and I’m just not there. You can’t go nine to nine for 16 years and think you’re going to be able to then tell them not to smoke pot. You can’t just show up at 9 P.M. and tell them ‘Don’t get high. Good night, sweetie.’“

When Lazarus asked if it felt good to leave “on his own terms,” he replied, deadpan: “Yes, I have found not being fired is preferable to being fired.”