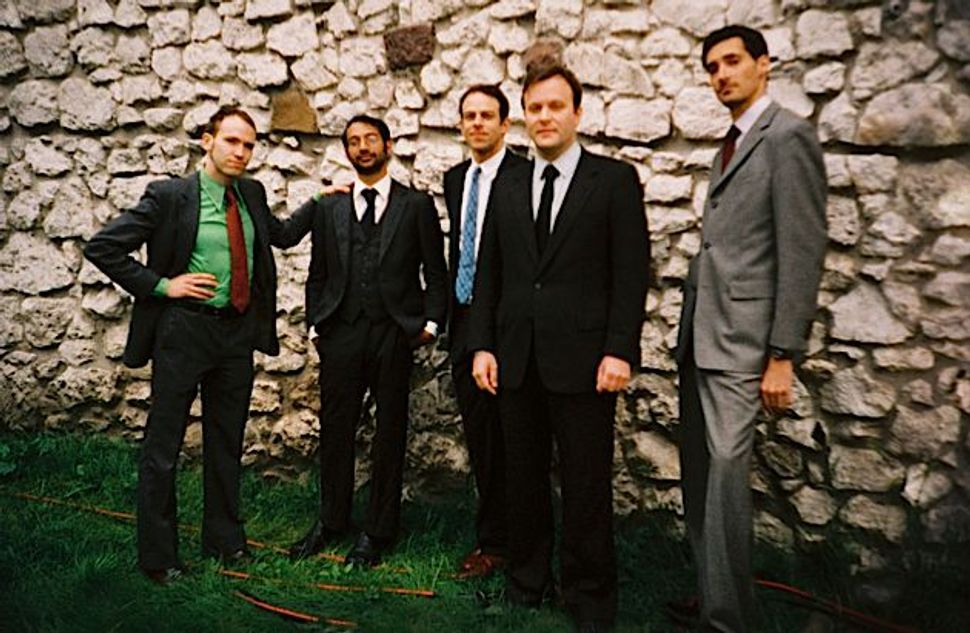 The Sway Machinery promises that its 3rd LP, “Purity and Danger,” is its “most chiseled enunciation of its foundational concept” yet — and it delivers on this promise. In a return to Afro-pop infused cantorial traditionals and modern blues myth-making, The Sway Machinery comfortably resettles into its epic vision, though this time with even more variance in vocals, guitar styles, and layered and progressive sound structures.

It’s been nearly five years since Sway’s second album release, “The House of Friendly Ghosts,” an ambitious collaboration with Khaira Arby, of Malian fame. With Arby, Sway sought out the consonance and even fusion possible between traditional cantorial music and Malian beats and chanting. Yet, while this global endeavor across nations and religions underscored a shared contemplative vision via the common language of Delta blues, this second album still felt like a departure from Sway’s original vision, even as it excavated its own historical roots.

With “Purity and Danger,” Sway turns from referencing its African influence to self-referencing the cantorial roots established on its 2008 debut album, “Hidden Melodies Revealed.” Once again, animated and deconstructed renditions of traditional hazanut are backed by a complex synthesis of percussion, brass and twang. A tapestry of Western forms inter-play, making it all new again, though this time in a consistently upbeat key — one that sometimes references popular blues and contemporary rock.

As we’ve come to expect with The Sway Machinery’s previous two albums, vocalist and guitarist Jeremiah Lockwood is in full form, though his vocals are even more versatile in content and style. He’s positing complex relationships among songs: A complex ghost story is incanted in traditional blues wailing on “Dead Lover’s Wedding,” with the traditional Hebrew chant on “Revive the Dead” as a mythical counter-point (or complement). Even on the latter, though, wordless and transcendent chanting gives way to vocal, blues wailing. And as is made clear through the ultimate song “Razo D’shabbos” (literally, “The Secret of Shabbat”), Lockwood is now comfortable chanting sizable portions of liturgy, not to mention taking on falsettos, harmonies, and even call-and-responses with a chanting chorus.

Unlike the band’s first album, the songs on this record seem to reach in multiple directions, and many possess a symphonic quality in which preludes and interludes take on a life of their own. At times, one becomes lost in the sheer quality of the percussion and brass sections — a tribute to the talent of the band’s instrumental members who hail from Antibalas, Iron and Wine, and Arcade Fire.

“Al Tashlicheni,” for example, has multiple tempos and clashes dissonant styles between traditional vocals and synthesized rhythms in one verse, but then resolves in guitar arpeggios in its vocal chorus. “My Angel’s House” has a Zeppelin quality in its verse’s vocals and central riffs, though its complex brass interludes and overlaid finger-picking make for a complex counter-point. Even “Magen Avos,” a recognizable traditional, alternates mellow chanting with an upbeat blues riff, referencing Lockwood’s legendary mentor, Carolina Slim. And take “Od hapaam,” a song in which creeping and quick vocals, choral inflection, bright horns, cheering and clapping(!), and variance in volume all lend to a live, innovative feel. Still, nearly each song retains a call to dance (or sway) in its consistently buoyant form — with songs like “Longa” leading the way in its rapid-fire, hora-inducing rock and klezmer frenzy.

On The Sway Machinery’s first album, each song’s recognizable reference and mythical interlude contributed to the whole — a mesmerizing and grand transposition of rhythm, blues, and sharp chanting. Songs peaked and crescendoed. On this third album, however, Sway is both self-referential and fresh: each song is familiar in its traditional reference and anchored in Sway’s trademark form, but each song generates its own ambient mood. These songs are far more interested, too, in exploring their own depth, sometimes leaving endings open-ended. To draw the obvious analogy: much as each cantor’s synagogue performance is its own achievement, each song on this album offers its own cantorial voice. In this sense, Sway’s third album maintains its first album’s tight, mythical vision of nearly epic musical proportions, even as it opens and develops its form in each song’s discrete variation.