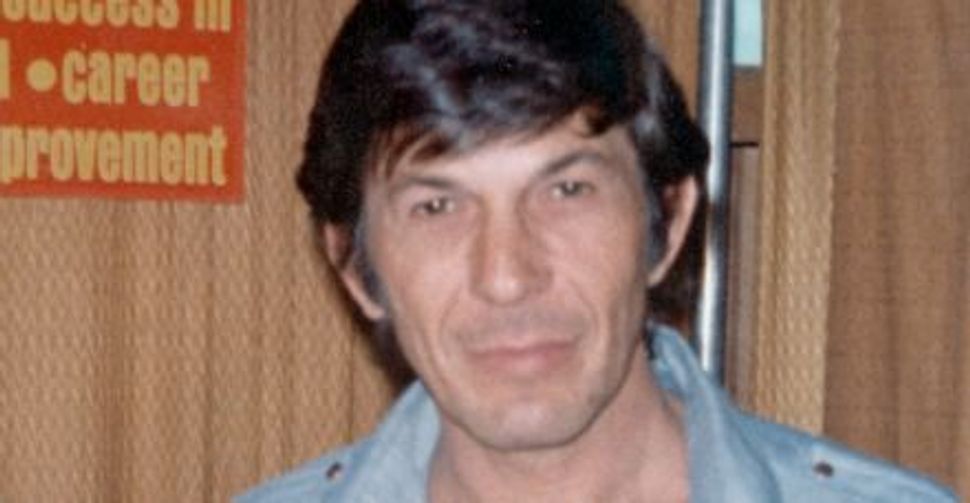 I first met Leonard Nimoy — a.k.a. Spock from the hit TV series “Star Trek,” who died today at 83 on February 27, 2015 — when as a celebrity at the 1973 American Booksellers Convention in Anaheim, California. He stopped by my publishing company’s exhibit booth.

A distant Litvak cousin of my mother’s from Grodno Gubernie (Byten-Slonim) in what is now Belarus, he became a friend and would later be showcased in several of my columns.

At the Folksbiene Yiddish Theatre’s June 12, 2003 “Broadway Salutes Yiddish” Gala, Nimoy recalled his audition for Maurice Schwartz — actor/director who founded the Yiddish Art Theater. Nimoy joshed, “Schwartz’s wife said: ‘He looks like a goy!’ But when I replied in Yiddish, Schwartz nearly fainted. I got the job.” That night Nimoy sang Itzik Manger’s “Oyfn Veg Sheyt a Boym” (On The Road Stands A Tree) then offered the Vulcan split-finger parting gesture which, he explained, “I first saw as a boy in shul.”

Thank you so much or your letter and columns. It means a lot to me to find myself in print in my Zeide’s favorite paper!

I read and enjoy your columns regularly! I was touched by your piece about the your father and totally agree that it was a pity that “only 600 supporters saw the National Foundation for Jewish Culture Awards.

At the October 9, 2013 American Friends of the Israel Philharmonic Orchestra’s benefit at Lincoln Center’s Alice Tully Hall, Nimoy was “beamed” onto the stage and set forth the IPO’s remarkable evolution from its 1933 nascence in Palestine — including a reference to violinist Bronislaw Huberman’s vision to bring Jewish 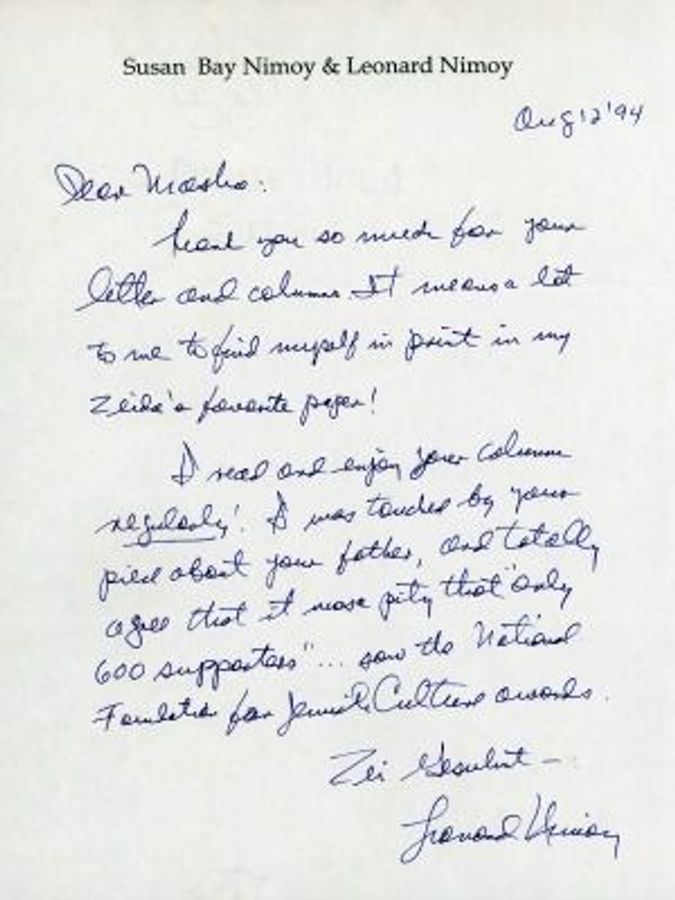 musicians from Europe to safety to its present world-class prominence.

A visibly fragile Nimoy left the stage and did not remain, as he had at past events, to mingle with the guests.

With my Nimoy correspondence I found the following Interview that appeared in a blurb from Publishers Weekly — possibly in conjunction with his 1973 ABA appearance: “By the time I was cast as the alien “Spock” in “Star Trek,” I had appeared in several other science fiction vehicles I usually played aliens. I suppose the reason was that I simply didn’t fit the image of the clean-cut astronaut from Terra. Whatever the explanation, I was happy to get the work… There is something very protective, very territorial that lives in the breast of the science fiction reader. Probably that accounts for the outpouring of mail to NBC, which resulted in “Star Trek” being continued for a third season. Many TV station managers have told me they’d rather not answer the phone when they take “Star Trek” off their rerun schedule.