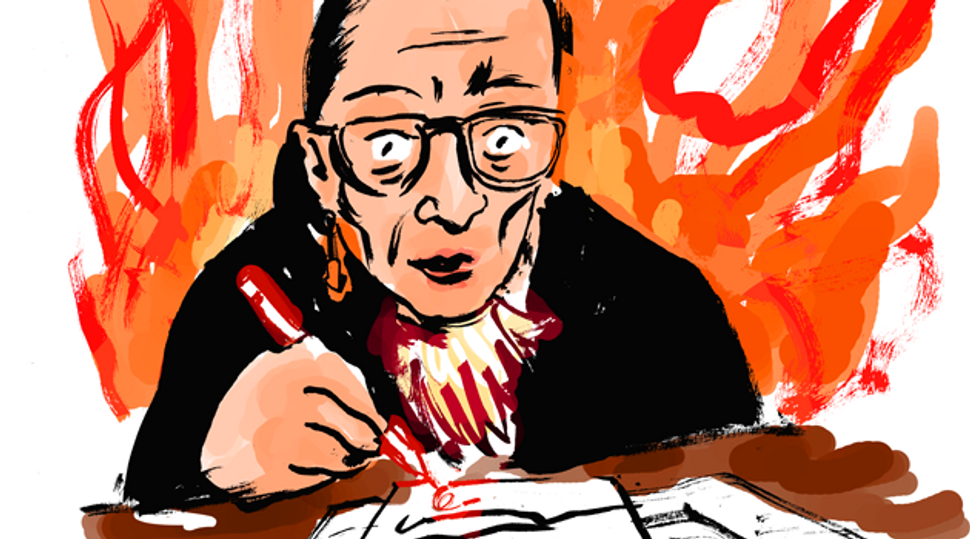 Today is Supreme Court Justice Ruth Bader Ginsburg’s birthday. She is 82. She is my favorite. So I thought I’d take this opportunity to humbly pay tribute to her amazing and fantabulous life.

Born into a Jewish family in Brooklyn in 1933, this woman has done it all: she broke down barriers, paved the way for others, left her detractors in the dust, lived a real-life fairytale love story, and fought her way to the highest judicial position in the land. Oh, and she’s also an internet meme.

Below are 52 reasons that explain and illustrate why we should all be worshipping at the altar of RBG:

1) Let’s start with the obvious: She knows how to accessorize.

2) She has a jabot for every occasion, including majority opinions and dissents.

3) She’s the first Jewish female justice to serve on the Supreme Court.

4) She’s Notorious and she knows it.

5) She even jokes about it:

6) “The ‘Notorious R.B.G.’ was started by a student at NYU Law School, and when the Tumblr first appeared, I asked my law clerks, “What is this all about?” but I didn’t know about Notorious B.I.G. And then I discovered that we had at least one thing in common: we both grew up in Brooklyn.”

7) “YOU CAN’T SPELL TRUTH WITHOUT RUTH.”

9) She fell asleep in the State of the Union…

11) And a little sleepy having stayed up all night writing because “her pen was hot.”

14) They were married for 56 years. When asked why she picked him, she said that he was “the only young man I dated who cared that I had a brain.”

16) When Marty was diagnosed with cancer during her first year, she took notes for him and typed up his term papers, all while maintaining her own course-load, a seat on the Law Review, and looking after their 14-month-old child.

17) She still graduated first in her class.

18) 14 law firms turned her down upon graduation.

20) Unable to find a job in a firm, she took up a teaching position, first at Rutgers School of Law, then at Columbia Law School, before founding the American Civil Liberties Union’s Women’s Rights Project in 1972.

24) No really, check out her scathing Hobby Lobby dissent:

25) “Would the exemption…extend to employers with religiously grounded objections to blood transfusions (Jehovah’s Witnesses); antidepressants (Scientologists); medications derived from pigs, including anesthesia, intravenous fluids, and pills coated with gelatin (certain Muslims, Jews, and Hindus); and vaccinations[?]…Not much help there for the lower courts bound by today’s decision.”

26) The first time she went up in front of SCOTUS, in 1973, she was so nervous she didn’t eat lunch. But then she thought: “I’m talking to the most important court in the land, and they have to listen to me and that’s my captive audience.I felt a sense of empowerment because I knew so much more about the case, the issue, than they did. So I relied on myself as kind of a teacher to get them to think about gender. Because most men of that age, they could understand race discrimination, but sex discrimination? They thought of themselves as good fathers and as good husbands.”

29) And rode together on an elephant. In fact, they often vacation together. Like that time RBG went parasailing in the South of France.

30) They even have an opera named after them — Scalia/Ginsburg, by Derrick Wang.

31) She followed her mother’s advice (for the most part): “My mother told me two things constantly. One was to be a lady. The other was to be independent. “

32) She doesn’t even know how awesome she is: “I just try to do the good job that I have to the best of my ability and I really don’t think about whether I’m inspirational. I just do the best I can.”

33) She has her own LEGO figure, courtesy of Maia Weinstock.

34) She proves women CAN have it all, even if things get tough.

35) As she told Elle Magazine in September 2014: “How do you have a family and a family life and a work life? Some people are writing about Justice Sotomayor and Justice Kagan and saying to rise to the top of the tree in the legal profession, you have to forgo a family. Where are these people? What about Justice O’Connor? She had three sons. I have two children. Pat Wald was with me on the DC Circuit and had five children.”

36) After attending the annual Red Mass held at the Cathedral of St. Matthew the Apostle with four other justices, she decided not to return because of the anti-abortion message being preached in the sermon. “Even the Scalias — although they’re very much of that persuasion — were embarrassed for me,” she told Abigail Pogrebin in her 2005 book, “Stars of David.”

37) She is believed to have been the first Supreme Court justice to have officiated a same-sex wedding. In 2013, she presided over the union of Kennedy Center President Michael Kaiser and John Roberts, a government economist.

38) She used to Jazzercise.

39) Now she just does the Canadian Air Force Exercises, almost every day.

40) And trains with a personal trainer twice a week. She’s 82. When’s the last time you went to the gym?

41) She parties with Theo Bikel — Can we have a “Fiddler” revival with her as the yenta? I would trust her implicitly with my matchmaking prospects.

43) She’s five-feet tall. But don’t even try to mess with her. She can take you.

44) She was serenaded by opera singer Placido Domingo after getting an honorary law degree at Harvard in 2011. 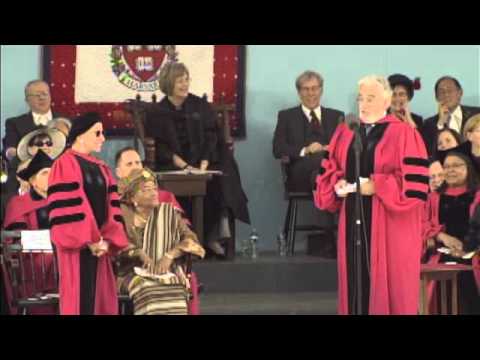 45) As head of the ACLU’s Women’s Rights Project, she beat sexist male judges at their own game by showing them how gender stereotypes built into the law could affect them. (See Weinberger v. Wiesenfeld, in which she defended a widower who found himself ineligible for Social Security survivors’ benefits after the death of his wife left him as sole caretaker for their newborn son.)

46) The idea, was to “confront the justices with real-life situations so that they could understand that what they once thought was a system of weighing benignly in the woman’s favor, in fact disadvantaged them.”

47) 39 years after she won the Wiesenfeld case (mentioned above), she officiated at 71-year old Stephen Wiesenfeld’s wedding.

49) And gave sermons dressed to the nines.

Collection of the Supreme Court of the United States

51) How many other Supreme Court justices have their faces immortalized on some random person’s arm?