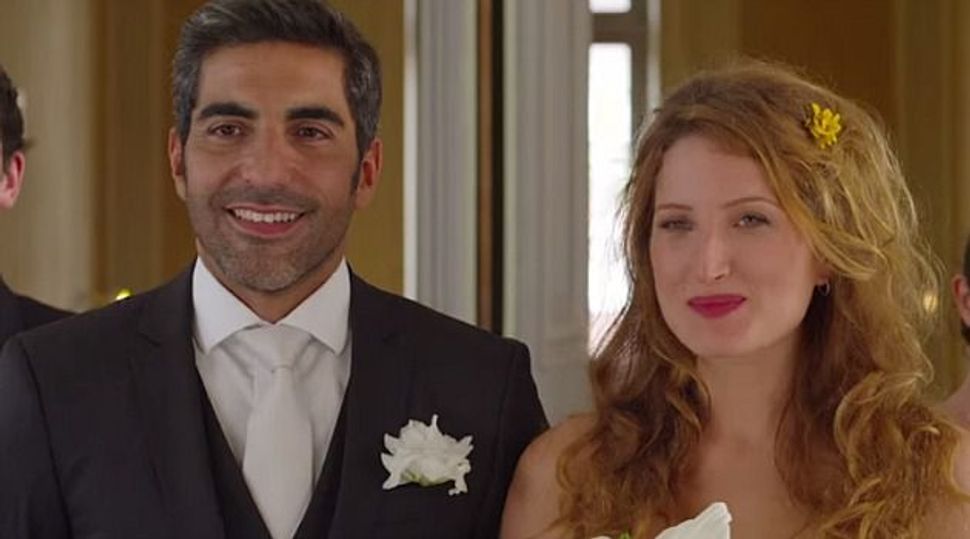 The French comedy “Serial (Bad) Weddings” opens with a white Catholic couple grimacing in church as they marry off their eldest daughter to an Arab. In the second scene they grimace once again, as their second daughter marries a Jew.

Not hot-button enough yet? A third daughter then marries a Chinese man, and the film’s conflict is thrust into motion when the fourth daughter becomes engaged to an African. He’s Catholic, but still, the parents weep over losing their final shot to have a white Frenchman son-in-law. Soon the parents may not be the only ones with an uncomfortable look on their face: American audiences will join them.

At least, that’s the fear of international film marketers who have declined to release “Serial (Bad) Weddings” stateside, according to TF1 International, the movie’s distributor. Released in France last year under its original title, “Qu’est-ce qu’on a fait au Bon Dieu?” (literally, “What Have We Done To God?”), the movie grossed more than $104 million in its native country, becoming the highest grossing film of the year.

But speaking to French magazine Le Point last fall, TF1 Head of Sales Sabine Chemaly said agents in the U.S. and U.K. had deemed the film too politically incorrect for the English-speaking market. Some of the fear may have to do with the fact that another recent French culture-clash comedy, 2011’s “The Intouchables,” weathered charges of racism from several American media outlets following its release.

Now, in the aftermath of ethnically motivated terrorist acts in Paris, a French comedy about nationalism and xenophobia with a Charlie Hebdo-esque sense of humor would seem to stand even less of a chance of finding an American audience. (Sample joke: the Jewish husband attacks the Chinese husband with “five years of Krav Maga.”) But that hasn’t stopped “Serial (Bad) Weddings” from being programmed at Jewish film festivals, including the Washington Jewish Film Festival, the Atlanta Jewish Film Festival and the San Diego Jewish Film Festival.

Tovbis needn’t have worried. The WJFF crowd ate up the film, laughing uproariously at the characters’ antics. This could partially be attributed to the fact that most of the jokes are directed at the grandparents, and the Jews get off relatively easy.

The biggest dig that director Philippe de Chauveron takes at Jewish characters is a gross-out gag about circumcised foreskin that’s almost identical to one in America’s own “Meet The Fockers.” The Jewish husband, a slender, dark-haired doofus named David (Ary Abittan), shares a knowing wink with his Arab brother-in-law when they explain to their children on Christmas that Jesus was “only a prophet” (out of earshot of their devout Catholic mother-in-law, of course).

It’s clear the film is meant to be an equal-opportunity offender once it introduces the groom’s father: a staunch anti-colonialist who is just as unhappy with the prospect of his new in-laws as they are with him. Ultimately all the brothers-in-law go into business together, the two fathers-in-law become best buddies, and the families graduate from trying to sabotage the final wedding to celebrating their, and France’s, differences.

De Chauveron has said he wanted to use the film to “deflate” some of the prejudices of his country’s anti-immigrant Front National party. And for better or worse, the movie ultimately turns into “My Big Fat French Wedding.” If a U.S. distributor does decide to take a chance on “Serial (Bad) Weddings,” after first dropping the terrible revised title, they should feel free to market the film by telling people it’s not as offensive as they think.