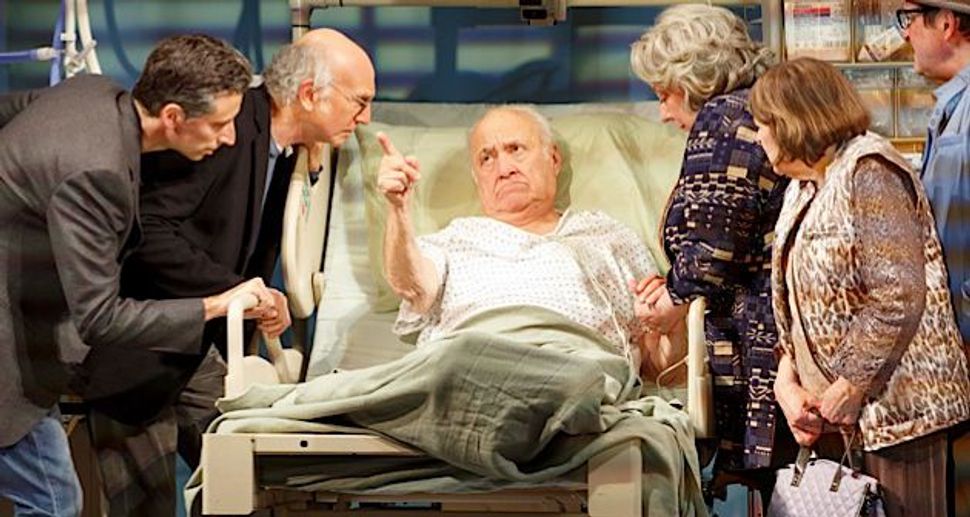 Jerry Adler is probably best known for his role as Herman “Hesh” Rabkin, Jewish adviser to Tony Soprano on the worldwide HBO hit “The Sopranos.” Adler, 86, currently appears in “Fish in the Dark,” the Larry David comedy on Broadway. It’s a small but pivotal role as Sidney Drexel, father to David’s character, Norman. It is Sidney’s death that sets up the ensuing rigmarole.

Though Adler also has a recurring role on CBS’s “The Good Wife” and appeared recently in the critically acclaimed film “A Most Violent Year,” acting is actually his second career. He began his professional life behind the scenes, as a stage manager and director, with more than 50 Broadway shows to his credit. “I’ve been around, kiddo,” he said to the Forward.

“Fish in the Dark” is only Adler’s second Broadway show as an actor. His first came in 2000, when he appeared in Elaine May’s short-lived comedy “Taller Than a Dwarf.” With a $13 million advance, though, Adler knows that this time around will last a bit longer.

Adler spoke to the Forward’s Curt Schleier about his “easy” new job, how he got started as an actor and how he landed “The Sopranos.”

Jerry Adler: This is for the Forward? Oh, wow. I remember, when I was a kid, my grandfather reading it all the time. He used to call it the Forverts.

Curt Schleier: I need you to be honest with the Forward. Who is more frightening, Tony Soprano or Larry David?

Frightening? Soprano. Larry David is affable. He’s the nicest guy in the world. I had done an episode of “Curb Your Enthusiasm.” We developed a nice friendship, and he called me and asked me to do the show. And when Larry David calls and asks you to do something, you do it. It’s a funny script, and I was laughing out loud when I read it. It’s not really a play. I don’t know how to describe it. It’s a longer version of his show. If you’re a rabid Larry David fan you’ll love it, and obviously, from the full houses, he has a lot of fans.

I would guess that 99.9% of the people your age are retired. What keeps you going?

I do it because I really enjoy it. I think retirement is a road to nowhere. I wouldn’t know what to do if I were retired. I guess if nobody calls anymore, that’s when I’ll be retired. Meanwhile this is great. It’s a comfortable part for me to do. I’m only onstage 20 minutes, and it’s very easy. It’s like stealing money. I don’t have to knock myself out. I’m in bed the whole time. My feet never touch the stage floor.

You appear in the first act. What do you do in the second act while you wait for the curtain call?

I have my iPad. I read. I do crossword puzzles. I listen to the laughter. There’s an intercom backstage. Listening to the audience laugh is very comfortable for me. I just enjoy the moment. I never had that opportunity before.

Your father was a manger of the famous Group Theatre. It was a golden age of political theater and involved people like Lee Strasberg, Harold Clurman and other legendary theater folk. Do you have any memories of that?

I have dim memories of summers going to rehearsals. I remember some of the shows, “Tobacco Road” and “Rocket to the Moon.” I remember [famous Yiddish actor] Luther Adler [no relation]. He became a good friend of mine. I wound up directing him in “A View From the Bridge” and “Awake and Sing!”

Your life in theater seems bashert, your destiny. You have an impressive résumé — everything from being stage manager of the original production of “My Fair Lady” in 1956 to directing the successful 1976 revival of that show. So how did you become an actor?

It was a fluke. I’d been out in Los Angeles for about eight years, directing a soap opera, “Santa Barbara,” and away from the New York scene. A friend of mine was casting a movie [“The Public Eye,” starring Joe Pesci] while I was doing that, and said, ‘When the director [Howard Franklin] describes the character [Arthur Nabler], it’s like he’s describing you.’ My friend wanted me to meet with the director, and when I met him the first thing he said to me was how much I reminded him of his father. I was actually surprised. I’d never acted before. I’d never entertained the idea of acting; it was an unusual thing. But I was getting ready to retire from the production end, anyway. So it became kind of interesting.

And from those humble beginnings came “The Sopranos”?

My second or third acting job was “Northern Exposure.” [He played Joel Fleischman’s old rabbi, Alan Schulman.] “Northern Exposure” was written by David Chase, and when David was going to do the pilot for “The Sopranos” he called and asked me if I would do a cameo of Hesh. It was just supposed to be a one-shot. But when they picked up the show they liked the character, and I would come on every fourth week. I was also doing [the sitcoms] “Raising Dad” and “Mad About You” at the time, so I was busy.

You have a very haimish, or homey, face, So I presume you play mostly Jews.

I played a cardinal once on “CSI Miami.” In full regalia. I also played a Greek.

You were raised in a Jewish household, right?

Yes. I was a bar mitzvah but I kind of drifted away from it.

But your second wife comes from a traditional family?

Yes, she’s very conscious of the holidays, and we celebrate them now in Connecticut, where we live.