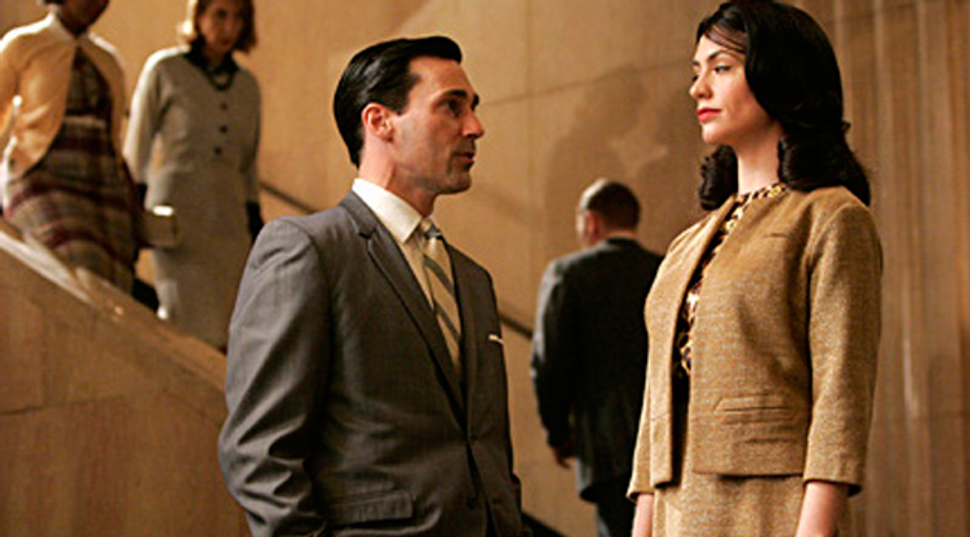 (JTA) — Spoiler alert: The post below discusses the content of “Mad Men” Season 7, Episode 8 (“Severance”) In the weeks before the beginning of the final season of “Mad Men,” the show’s creator Matthew Weiner did rounds of interviews on his Jewish roots. He even recently sat down for an interview with New York Magazine critic Matt Zoller Seitz at New York’s Museum of Jewish Heritage to discuss how Jewish identity is a fundamental element of the show.

Right on cue, the final episodes kicked off Sunday night on a Jewish note. A revitalized Don Draper, back to his promiscuous ways, is haunted by past flame Rachel Menken in a dream. Menken is of course the heir to the large fictional Menken’s department store and, for a short time, Don’s client and lover. In an episode filled with eerie coincidences, Don discovers that Rachel died of leukemia just a week before his dream. He shows up at the shiva to pay his respects and is met by Rachel’s sister Barbara, who explains that the last years of Rachel’s life (her married post-Don years) brought her exactly what she wanted out of life. Barbara is well-aware that Don eventually rejected Rachel’s passionate advances to keep his unhappy marriage together. When Barbara starts to self-righteously explain to Don what “sitting shiva” means, he replies that he’s lived in New York for a long time and knows exactly what shiva is (he has even brought cake!). However, Don’s non-Jewishness sticks out when he is asked by someone else to help the group form a minyan.

“He can’t; he’s not Jewish,” Barbara says with more than a hint of disdain.

As Don leaves, he begins to cry as he hears Rachel’s extended family praying in Hebrew in the adjacent room.

It is an interesting cap to an episode that lays bare Don’s subconscious yearning for a more rooted life. Rachel’s Jewish family has come to represent the loving model of domesticity in which Don (and the other non-Jewish characters on the show) has continuously struggled (and failed) to belong.

However, it is clear that Don had stronger feelings for Rachel than most of the women he has slept with throughout the 1960s, and if he could have gone back in time, it seems that he might have been willing to start a family with her. In the second season, long after their fling has petered out, he encounters Rachel with her new husband named Tilden Katz, who is conspicuously less handsome than Don. At first glance, Don realizes that Rachel has made the “safe” choice and chosen to live with a successful, if less dashing, Jewish man. We do not hear from Rachel herself how her marriage has gone, but the shiva scene reveals that she has two children and a loving family.

It is also worth recalling that several episodes after he sees Rachel with her new husband for the first time, Don drunkenly tells a bouncer outside a club that his name is Tilden Katz.

Of course, Don is already notorious for his identity theft – but part of him might also want to be Jewish.