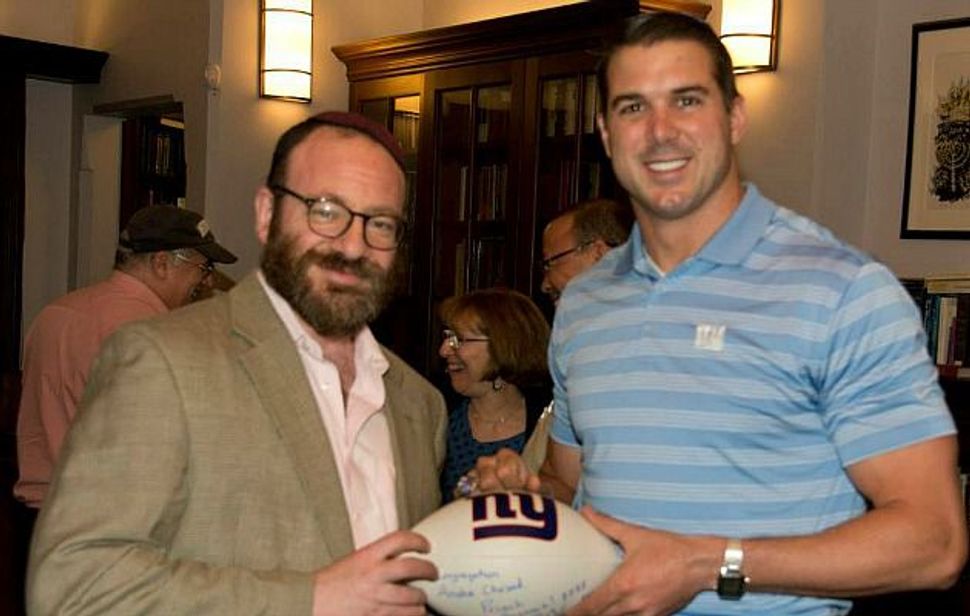 Image by courtesy of jeremy kalmanofsky

For many a year, on the day before Passover, Rabbi Jeremy Kalmanofsky of Congregation Ansche Chesed on Manhattan’s Upper West Side inked a sales contract with his synagogue’s non-Jewish custodian, Tony Visioso. According to tradition, Visioso took formal possession of the synagogue’s hametz. After the holiday, Visioso sold the goods back to the rabbi, leavening and all.

This year, Kalmanofsky had an idea to put some zip in the ancient tradition.

“I thought the kids would find it very cool if I could find a sports figure to buy our hametz,” he says. Requests to the Knicks and Rangers to provide a player were unproductive. Just in time, Josh Hanft, Ansche Chesed’s executive director, recalled that he had once served on a jury with Pat Hanlon, a New York Giants executive.

A call went out to Hanlon. He remembered Hanft and, better yet, dispatched Giants’ linebacker and special team captain Zak DeOssie to the Upper West Side Synagogue two days before Passover.

DeOssie’s most high-profile gig on Big Blue is hiking the football back to punters and holders for field goal tries.

“I thought I’d have to go out to the Giants’ facility to deliver the contract,” says Kalmanofsky, “but here he was — a really big guy walking in the door.”

After signing on the dotted line, DeOssie, a Brown University graduate whose father also played for the Giants, resold the hametz to Visioso, saving him from having to return to the synagogue for the resale.

As a memento of the the transaction, DeOssie presented Kalmanofsky with an autographed white Giants football. He wore a kippa lent to him by Pat Hanlon, who is Jewish.

“A friend brought me that kippa from Jerusalem,” says Hanlon. “I lent it to Zak. He emailed me right away to say how much he appreciated the chance to learn about another culture and its traditions.”

As for the kids, and not less for the grown-ups, the visit of DeOssie was indeed, very cool.