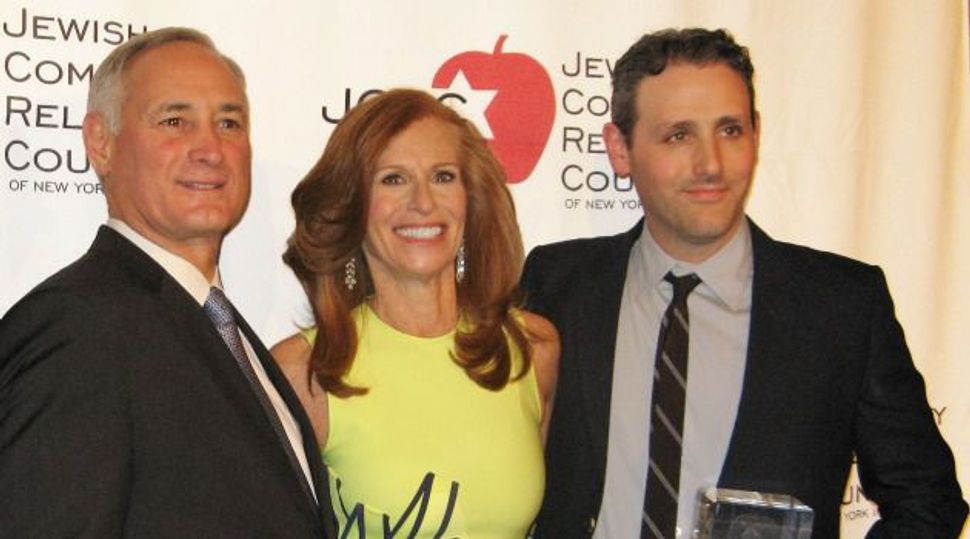 Launching JCRC’s 2015 Gala dinner at The Pierre, emcee Dari Alexander, Fox 5 News Anchor, touted the Jewish Community Relations Council as most successful “in developing meaningful relationships between our cities’ ethnic and religious communities — bringing together Jews and non-Jews who care about our city and the State of Israel.”

Tyrangiel led off with: “I’m grateful for this recognition for terrible competitive reasons–I grew up in a family that featured some real over-achieving Jews– my great uncle was Judah Nadich, (son of a Workmen’s Circle member) Dwight Eisenhower’s first advisor on Jewish affairs during the Holocaust…a pillar of the Conservative movement, a fierce advocate for gender and racial equality and longtime rabbi at Park Avenue Synagogue.” A 650-strong kvelling breath intake followed.

In his acceptance-cum sermon address he honed in on: “What I most value about Judaism and how it has guided my course of life.” Reflecting on how his parents taught him about Tikun Olam — “our obligation to help repair this broken world” — he posited: “We Jews have sophisticated skin — but very naïve bones and the idea that we were born into a world full of flaws and maybe we can just about make it a better [world] suits us well. Judaism is inherently tolerant of how any individual pursues Tikun Olam making it not merely an obligation but an opportunity for expression. I found my voice in journalism.” Citing among others– Joseph Pulitzer, Thedor Herzl– he touted “healing the world with facts…creating a community through knowledge” and ended with an aside about the many wonderful people he’s been able to share his ideas with including “my desperately timid and indecisive boss Michael Bloomberg. He then lauded Michael Miller’s leadership of JCRC and declared himself humbled to receive the award.

“It’s a long way from Syracuse N.Y. and Oswego,” said honoree Goldberg who oversees 106 stores in six states, a chain which his father co-started with 3 stores in Upstate N.Y in 1946. Applauded for their multi organizational Jewish communal involvement, Goldberg said: ”The idea that someday we might be recognized for achievement in New York City never entered our minds.” Robin Goldberg added: ”Like a tree that requires water, air and sun to thrive, we require a strong community where values and morals are learned.”

The Who’s Who roster is too long to list, but as I was going in to dinner, Michael Miller asked me: “Do you know this gentleman? “ Of course! It was NY State Comptroller Thomas P. DiNapoli a regular JCRC dinner guest whom I’d met many times over the years. I took the opportunity to thank him personally for the $3.90 check he signed following a 2-years long letter-writing campaign with Albany to reclaim money owed me for decades by the State.