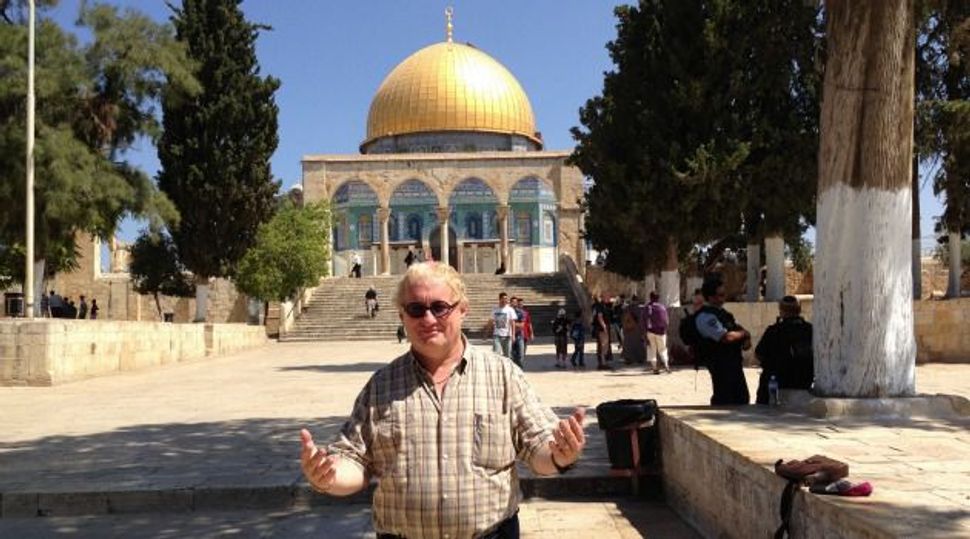 Occupying His Territory: Tuvia Tenenbom makes his way back from the Al-Aqsa mosque. Image by Isi Tenenbom

“Catch the Jew!” came out in Israel in September of last year, where it fast landed on the #1 rank of Israel’s most important bestseller lists. In November of last year this same book, though under a different title, was published in Germany, where it became a four-month Spiegel bestseller. In both countries countless critics, from both the left and the right of the political spectrum, gave the book rave reviews. Over two months ago “Catch the Jew!” came to America. So far, as of this writing, four American publications reviewed it. Two, Publishers Weekly and the Wall Street Journal, gave it splendid reviews, and the other two, Tablet and the Forward, gave it critical reviews. The first two publications are not Jewish, the second two are.

To date, no other American Jewish journalist has bothered to review this book.

What have I done to upset the Jews here?

No. What I did say, more or less, is the opposite.

For many months, and helped by a dedicated team of camera and video people, I roamed the land, examined every shred of evidence that came our way and, based on the facts, I determined that Israeli Jews are not as bad as my colleagues in the media have claimed.

Reason enough, wouldn’t you say, to get American Jews very upset with me?

For many American Jews I am, if I like it or not, a traitor to the cause. What’s the cause? You got it: Portraying Israeli Jews as racist, lawless and ruthless occupiers — in addition to many other ills. Only if you thusly portray Israeli Jews, it seems, American Jews in the media will love you. Otherwise, oy to you.

Case in point is Raphael Magarik’s two-page review of my book in the Forward.

“Tenenbom’s readers reelected Netanyahu,” he writes, “and his book clarifies why.”

Who gave the critic the information that my readers voted for Bibi? If Raphael has such evidence he never discloses it, though it would be nice if he would at least share with us who will win the next German election.

“In his first book, ‘I Sleep in Hitler’s Room,’” the critic continues, “he interviewed German anti-Semites.”

Nice take, but false. The critic wants you to believe that I spent my time in Germany investigating where the anti-Semites lived and then ran to them for interviews.

With one exception, I did not look for anti-Semites to interview; I have better things to do in my life. I interviewed people from all walks of life, anyone I could meet, and they shared their thoughts with me, their intimate thoughts, and too often those thoughts included offensive remarks about Jews. This shocked me, precisely because I didn’t expect it.

But let’s leave that book and come back to “Catch the Jew!”

Here’s what the critic writes, now that he had established me as a total agenda-driven author: “His new book, while set against Judean hills and Jerusalem stone, largely repeats the formula.”

Yeah. I went to Israel in search of anti-Semites. Couldn’t think of a better place.

The Forward’s reviwer has something good to say about me as well. “He speaks German, Hebrew, Arabic, English, Greek and Spanish (those are just the languages he mentions),” he writes.

When and where did I say that I speak those languages? Sadly, I don’t speak any Spanish, not to mention Greek. But thanks for giving me such credit, the only credit you give me.

Knowing what Forward readers believe and think, the author now proceeds to tarnish my credibility where he obviously calculates it would hit the rawest nerve: Gays and blacks. “Gays,” he quotes me as saying, “are not into wearing more and more clothes.” What he forgets to mention is the context of this line: The Gay Day Parade.

Moving on in same fashion, the author quotes me as saying that “young black Hebrews ‘look very much like Barack Obama’s children.’” What he fails to mention here is that this quote relates to specific youngsters that I had just met.

Continuing to read his review I learn that the author has taken lines out of context, or combined words composed with sentence fragments from my book in order to form a totally different meaning.

The critic is seemingly upset with me that I didn’t portray Arik Ascherman of Rabbis for Human Rights as a great American Jew (now living in Israel). What does he do to “correct” Arik’s image? In his review – which often competes with One Thousand and One Nights for the title of Most Untrue Stories – he claims that “Because Rabbi Ascherman’s wife is politically to his right, Tenenbom decides that on ‘complex issues, more often than not women understand much faster than men.”

The words quoted here come after a bizarre exchange between Arik and me, about which I referred to in the line that you are quoting. But this is not mentioned in the review. In addition, there are more than just a few pages in “Catch the Jew!” documenting Arik and his Rabbis for Human Rights’ questionable motives and inaccurate accusations.

Magarik’s review goes on to repeat, over and again, this same formula of taking lines out of context and arranging words in a dishonest combination technique. Out of respect for the reader of this response, I won’t tire him or her with more and more of such examples.

But the reviewer, obviously feeling satisfied with his throwing out-of-context lines at me from my own book, soon moves to the next stage in this his game of trickeries and starts quoting other sources to prove me wrong.

You know where this will go. The author cites various statistics and data, all pointing to the brutality of the Jews.

I’m familiar with those stories about the brutal Jews, plus the stories of how poor the Arabs are, and I actually did mention them in “Catch the Jew!” Not only did I mention them, I also went to check out their validity, which actually makes for many pages in the book.

I don’t believe in sipping my latte at a café in NY or LA, Berlin or London, browsing the Web and then writing about events taking place thousands of miles away. Not one finding in my book originates in Google, Yahoo or any Internet site. I believe in checking the facts on the ground.

Given that I’m Jewish, born in Israel and having served in the Israeli Army, I risked my life every time that I crossed a checkpoint. Had they known who I really am, most likely I would be dead long ago.

But I went there, wherever my feet took me, and often was surrounded by men with guns. Was I aware of the risks? Sure. Why did I do it? Because facts you find on the ground, not on a Mac.

Let me share with you, my reader, some of the facts.

On almost any given day NGO activists escort journalists to Palestinian cities and towns, where they witness the Palestinian poverty stories as reported by their colleagues in the media, such as the ones Raphael cites. But I took an extra step: I kept on walking, to places where no activist wanted me to go. What did I see? Shack-living Bedouins driving expensive Mercedes while communicating on their newest iPhones; “homeless” Palestinians who in reality live in gated communities; Europeans teaching Arabs how best to fight Jews; self-hating Jews, financed by moneys from abroad, instigating Arabs against Jews; Jews who run out of fear of being shot – and many, many other facts that left me speechless. For example: Would you believe that an abode which looks like a shack is actually a palace inside, its exterior well hiding the nicest of furniture and most expensive of technology? Did you know that European governments, and some American Jewish foundations, pay Arabs to settle illegally next to Israeli Army bases? Did you know that the EU sponsors tours to Yad Vashem in order to convince young tourists that the Holocaust didn’t really happen the way the Jews say it did? Did you know that the Red Cross, the guardian of the Geneva Conventions, claims that Israel is the only country not abiding by international humanitarian laws? Did you know that Doctors Without Borders is very busy inventing diseases, just so that they could blame Israel of causing them? Did you know that some big American Jewish organizations are footing the bills for anti-Israel propaganda? Did you know that European countries invest millions upon millions every year to destabilize Israel? Did you know that “peace activists” encourage Arab kids to throw stones at Jewish girls? Did you know that journalists make up stories about events they have never seen and places they have never visited?

These facts, among many others, are in the book. But you wouldn’t learn them from reading the review.

The reviewer repeatedly attempts to paint me in the worst possible light. My favorite example is this: “Tenenbom uncritically follows Jerusalem mayor Nir Barkat’s suggestions to walk around the City of David with a Bible to ‘see for myself how point-by-point, page by page the two corroborate one another.’” This is a sophisticated manipulation of the text: a strategic placement of quotation marks in key words in order to form a totally different sentence that makes me look like an Evangelical Christian from Texas walking around with a Bible in hand, verifying facts via Isaiah.

Did I ever walk around with a Bible to gather evidence? You must be kidding. Here’s what I wrote: “Nir Barkat, the feisty mayor of Jerusalem, tells me that I should go for a walk in Jerusalem’s City of David, take a Bible with me, and see for myself how point-by-point, page-by-page the two corroborate with one another.” That’s not me talking; that’s Nir telling me what to do.

Many American Jews will trust each word in this “review.”

“He got you,” they would say, victoriously.

What’s left for this Greek-slash-Spanish to say?

Tuvia Tenenbom is the author of “Catch the Jew!” He is a frequent contributor to the Forward.