‘2 By Wolf’ — A Yiddish-Gaelic Theatre Delight 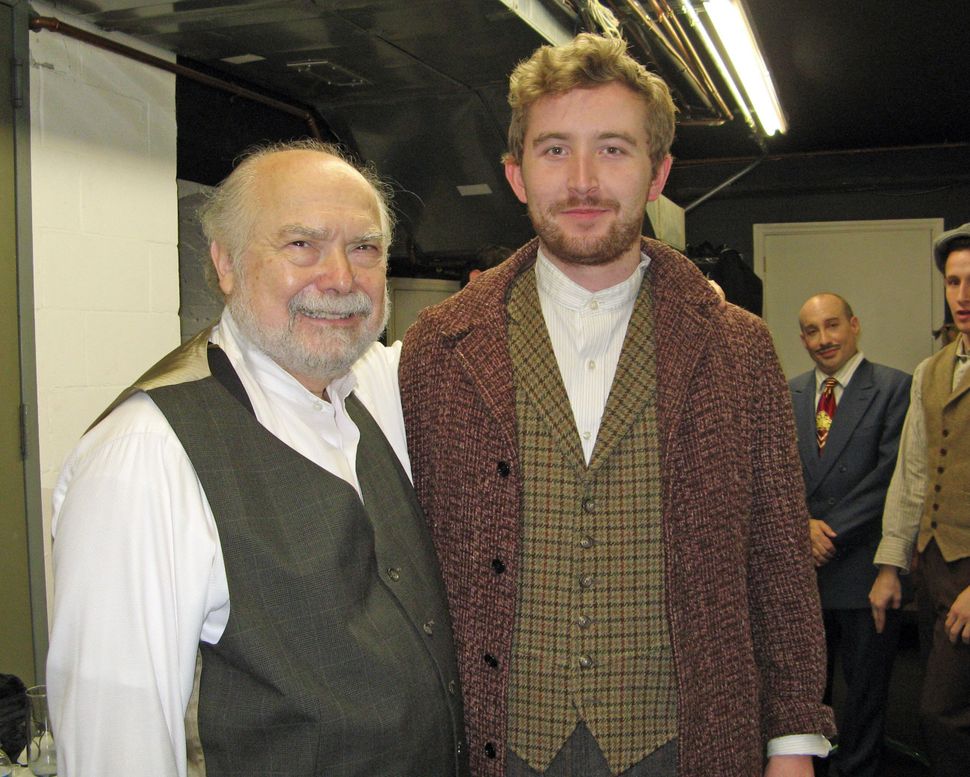 On my way to see The New Yiddish Rep’s production of “Two By Wolf” which includes Wolf Mankowitz’s play “The Bespoke Overcoat,” I flashed back to 1956, when in the darkness of the Thalia Theatre on Upper Broadway, I saw the British film “The Bespoke Overcoat” based on Mankowitz’s play about a Jewish tailor and a promised winter coat. I then assumed that it had been a translation of a work by a Yiddish writer unaware that “bespoke” with its Middle English provenance was Fleet Street lingo for custom made.

Now in the New Yiddish Rep’s double-header “2 By Wolf ” masterfully directed by Moshe Yassur, “The Bespoke Overcoat” has been translated into Yiddish by Shane Baker who portrays the unfortunate coat-needy Fender to Michael Fox’s Maury the tailor. Growing up in pre-war Poland with several uncles who had been tailors. I relished the Yiddish schneiderish —  tailor-related — vocabulary so seamlessly interwoven into Baker’s script and articulated by Fox.

As Fender, Baker plays — as they say in Yiddish — on ale strunes on all the strings i.e. pulls out all the stops as he returns as a ghost lamenting to Maury the tailor his unfortunate life as an ever cold unappreciated, tortured employee of a heartless boss, coat dealer named Ranting (Ilan Kwittken).

The second production of the “Two” Wolf works is a touching short montage “The Irish Hebrew Lesson” starring Michael Fox an old Jewish merchant in 1926 Dublin who hides a young Irish revolutionary in his “shtibl” a below street mini synagogue, with whom he shares the angst of being “the other.” Having escaped Russian pogroms, the sympathetic Old Jew (Fox) aids the armed young man who is evading the British Black and Tan search patrol. Speaking fractured Irish, Fox teaches the young man — Irish actor Fergal O’Hanlon — a Hebrew prayer, wraps him in a prayer shawl, puts a yarmulke on his red wavy locks and when two Black and Tans (Irish actor Stuart Cullen and Lev Herskovitz) storm through, O’Hanlon passes muster with the panache of a yeshiva alum.

What a joy to witness and hear a so beautifully articulated Yiddish production. With not an empty seat in the intimate theatre — ere the performance began — when asked how many in the audience spoke Yiddish—only four hands went up (mine included). No matter. So accurate and substantive are the Yiddish supertitles—that even I could not help but sneak a peek.

‘2 By Wolf’ — A Yiddish-Gaelic Theatre Delight