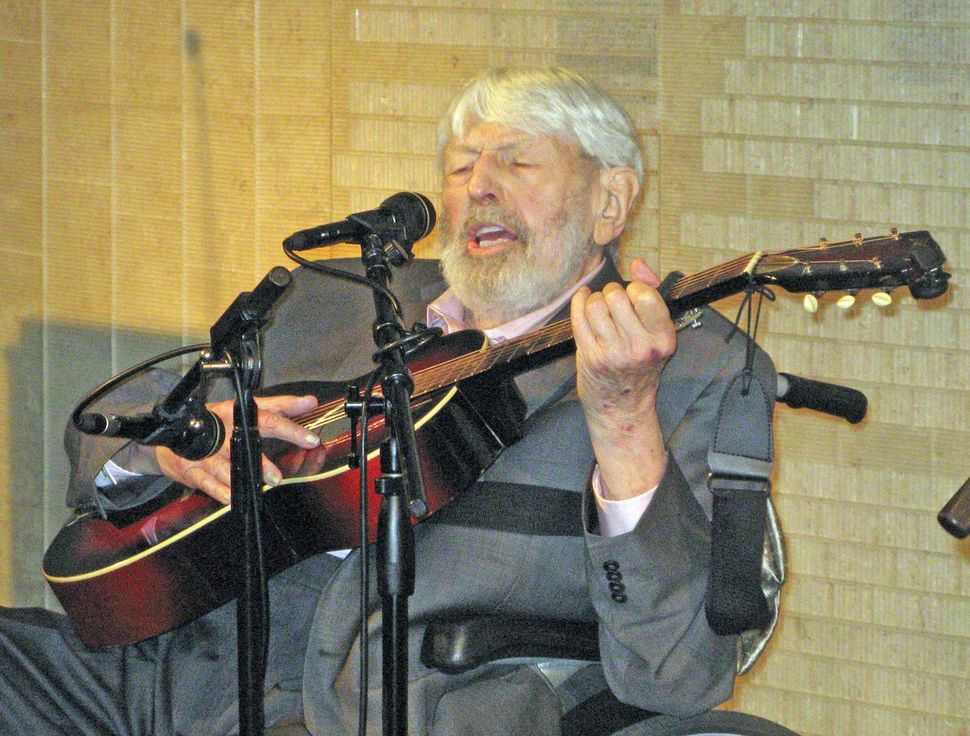 “I have to sing!… It is a need bigger than eating” a young, handsome Theodore Bikel declares in a clip from Murray Lerner’s 1967 film of the Newport Festival which was shown at the YIVO’s 13th Annual Heritage Luncheon at the Center for Jewish History honoring 91 year old Bikel.

In the film, Bikel is seen sharing the stage with a young Judy Collins. Among his songs is one about a boy who asks his grandmother not to end the Sabbath too soon [since] day comes soon enough with strife.

Ethel Isaacs, co-founder and artistic director of the Center for Traditional Music and Dance, said, “Bikel has enriched the lives of so many in this country and around the world…through his brilliant artistry, humanist values and passionate advocacy for social justice and equality.” Responding to her adulation, “Theo, you’re larger than life,” Bikel asserted: “Always have been.”

In a musical tribute to Bikel, YIVO’s music mavenLorin Sklamberg introduced based-in-Germany Daniel Kahn founder of “The Painted Bird” klezmer band who performed a Yiddish version of “Lili Marlene.” Shura Lipovsky, who lives in the Netherlands, sang a Ladino duet with Bikel. Sklamberg sang “Edelweiss” a “Bavarian song in Yiddish” which Bikel as Captain von Trapp had introduced in the original 1959 Broadway production of Rogers & Hammerstein’s “Sound of Music” and the audience join in singing in Yiddish: “bentch mayn heimland far eybig” (bless my homeland forever). Proclaiming “the most appropriate song to celebrate the force of Theo’s life,” Sklamberg/Kahn led everyone in “Oyb ikh volt gehat koyech—had I the strength, I’d rush through the streets shouting loudly ‘Sholem! Sholem! Sholem!-peace! peace! peace!” Bikel sang the refrain vigorously in English then proclaimed “kinderlakh/kiddies —let there be peace!”

“We had a meeting in Hungary,” recalled Bikel holding a guitar. “Shura taught this song to groups of people who could not stand each other—Gypsies, Hungarians, Estonians and Russians, Irishmen and Englishmen, Greeks & Turks — all of whom were [currently] or former enemies and everyone joined in Yiddish!” YIVO executive director and event emcee Jonathan Brent lauded Bikel for—among his many contributions—his interpretation of Yiddish folk songs “that stayed with me all my life.” 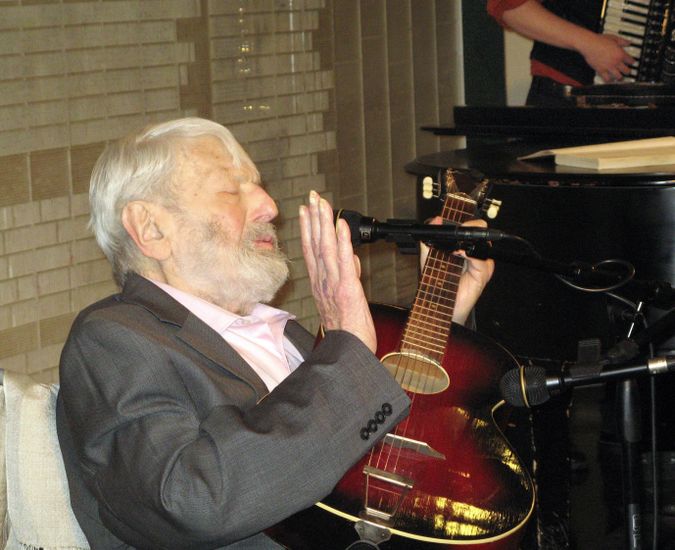 Accepting the YIVO’s Lifetime Achievement Award from former literary editor of The New Republic Leon Wieseltier, Bikel said: I love my colleagues, my fellow musicians, my brothers and sisters in arms—these are the only weapons that I acknowledge”’ and then thumped the guitar. “I am particularly grateful that YIVO saw fit to honor me because they ‘re the repository of what I cherish—Jewish culture, Yiddish language, Yiddish folklore—things which in a world of vanishing cultures have become the most precious remnant that I can name for myself. I can tell you that this [award] will take a place of honor in my home in the room that is known as Plaqistan.”

If, as a Yiddishist/Yiddish lover, you’ve been feeling more and more farklempt about the present and future prospects of Yiddish — as a language, culture and lifestyle— you may savor Wieseltier’s nail-on-the head take on the sad state of the community. Among his observations: “Religious Jews know almost nothing of our secular traditions and secular Jews know almost nothing of our religious tradition. Jews who live in Hebrew know almost no Yiddish and Jews who live in Yiddish…know almost no Hebrew… Jews who are fluent in the siddur are strangers to Bialik and Amichai….An alarming number of poor souls among our brethren seem to feel that all they require for genuine Jewishness is Woody Allen and Philip Roth and Jerry Seinfeld… We lack the consciousness that we are nothing less than a civilization. Theo is one of the greatest of our culture’s guardians and of its connoisseurs. His laughter itself is a high form of Yiddishkeit. A culture’s best shorthand after all, is it’s humor… and Theo’s reach as a Jew, is that he is the man who gets all the jokes and tells all the jokes.”