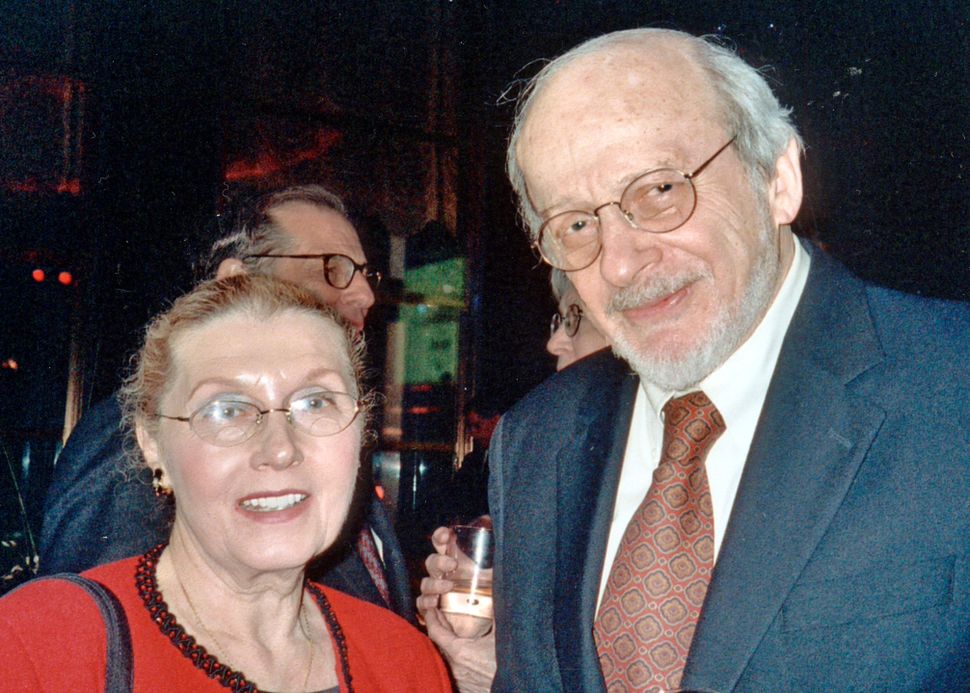 Masha Leon and E.L. Doctorow in 2006 Image by Karen Leon

E.L. Doctorow, who died on July 21 at age 84, was among the literary lions I chatted with at the 1975 American Booksellers Association Convention at the New York Hilton — at which my husband Joe and I were publisher-exhibitors. It was the year Random House published his mega-hit novel “Ragtime.”

Decades later, at the April 2006 Guild Hall Academy of the Arts’ Gala at the Rainbow Room, attended by among others Bud Schulberg and Kurt Vonnegut, Doctorow (a past Guild honoree) and I reminisced about that 1975 “Ragtime” hooplah. We chatted about our mutual friend Marc Jaffe who in 1979 negotiated the $1.4 million advance for the paperback rights to “Ragtime.” I remembered Jaffe — then an editor at New American Library — telling me “It was the largest advance to date…I was the Jew who held the ’Jewish seat’ in (NAL’s) editorial department — a position Doctorow held before me.”

With intermittent encounters over the years — including the 1988 ABA in Anaheim, California, at which Doctorow was on the literary “A” list along with auto-biographists Shirley Temple, Shirley MacLaine Betty White and Natan Sharansky — my last chat with him was at the April 20, 2013 “Bronx High School of Science 75th Anniversary Gala” at The Waldorf-Astoria at which Doctorow shared the spotlight with fellow Bronx Science alums: singer actor Dominic Chianese (’48), journalist-author Jeff Greenfield (’60), Daniel Liebskind (‘65), Nita Lowey (’65) and John Favreau (’84). (My husband Joseph Leon was a ’46 alum).

Addressing the 600-strong ballroom crowd, Doctorow admitted circumventing math and science “by taking a course in journalism.” Assigned to do an interview, he delivered what he modestly admitted his teacher described as “the best interview she had ever read.” In great detail his narrative was about a “German Jewish refugee — a camp survivor. A sweet man who wore a blue serge jacket, came to work with a brown paper bag lunch and thermos of tea which he drank Old World style, putting a sugar cube between his teeth. He knew the music repertoire — Vladimir Horowitz, Artur Rubinstein, Jascha Heifetz — all knew him, called him by his first name — -Karl the Stage Door Man.”

When his teacher suggested sending a school photographer, Doctorow said it was not possible. “Karl is very shy.” The teacher said: “How shy can he be? He talked to you!” “There is no Karl. I made him up,” Doctorow fessed up. “I accepted her judgment which was an F and went about my business,” said the author of “faction” bestsellers “Ragtime”, “Billy Bathgate” and “The March.” The audience ate it up.

Sharing the sad news with Marc Jaffe — currently a freelance editor and publishing consultant — he told me: “What stands out to me as significant is that Doctorow [who] did not attend a synagogue took his being a Jew seriously on a personal level. We were neighbors in Sag Harbor and he gave the name ‘Jerusalem’ to a little sailboat — the smallest you can find — that Bantam Books had given me as a 15th anniversary gift. It rarely sailed.”

“He was a man who had a very wide-angled literary vision… In the sense that he encompassed history and—in some ways—presented the future with his writing. He didn’t put any boundaries where his stories would take him… You find one of the widest ranges of fiction that any major writer could have from “Ragtime” as a subject—to a novel about the Civil War. So this is one of his great achievements as a writer. In a curious way it may have limited him to the larger audience, but Edgar was never wiling to bow to that kind of underground, unspoken tradition of publishing to achieve the same kind of book they wrote the last time.”