The Jewiest Christmas Movie Ever, Brought To You By Seth Rogen 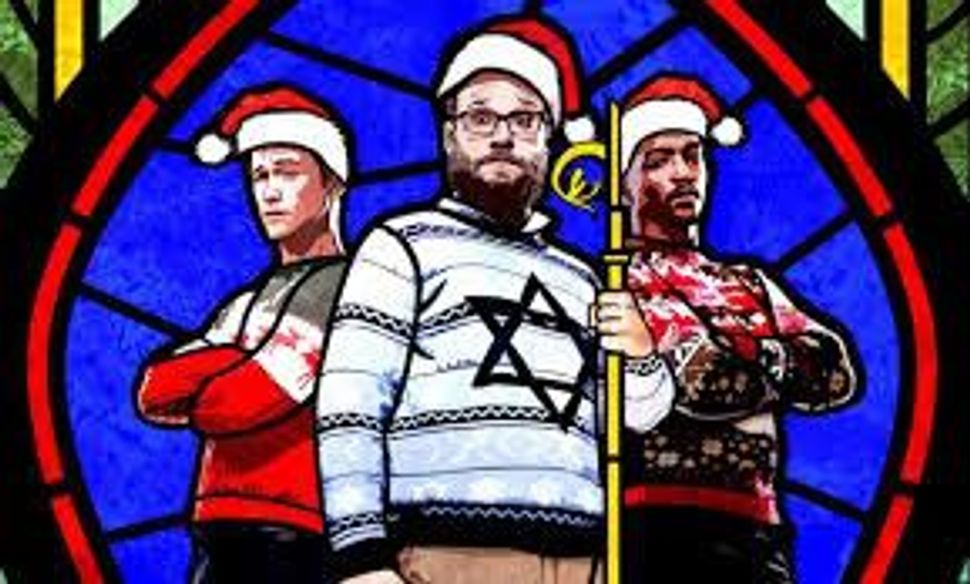 Who knew Jews did anything but eat Chinese and go to the movies on Christmas?

Seth Rogen has other plans.

“Made by Jews, is about Christmas, and opens on Thanksgiving,” Rogen posted about his new movie, “The Night Before,” on Facebook.

Aforementioned Jews: Seth Rogen (Isaac) and Joseph Gordon Levitt (Ethan), and Anthony Mackie (Chris) — all set to star in the comedy that opens on November 25.

The Plot: It all starts with three best friends, who have hung out on Christmas Eve for years. Now they’ve all grown up (more or less) and have decided that this is going to be their last Christmas Eve celebration (“The best Christmas party in New York City!”) — and boy, are they going out with a blast (of drugs).

Especially Jewy: Seth Rogen’s blue Star of David sweater that he wears the entire time, including while attending a Christmas party and in church. When he passes a group of Hasidic Jews eating Chinese food, they give him a solid nod of approval.

Lizzy Caplan has a cameo, as does Mindy Kaling and even Miley Cyrus, who belts out “Wrecking Ball.”

Remember, kids: “We did not kill Jesus! We did not do that!”

The Jewiest Christmas Movie Ever, Brought To You By Seth Rogen