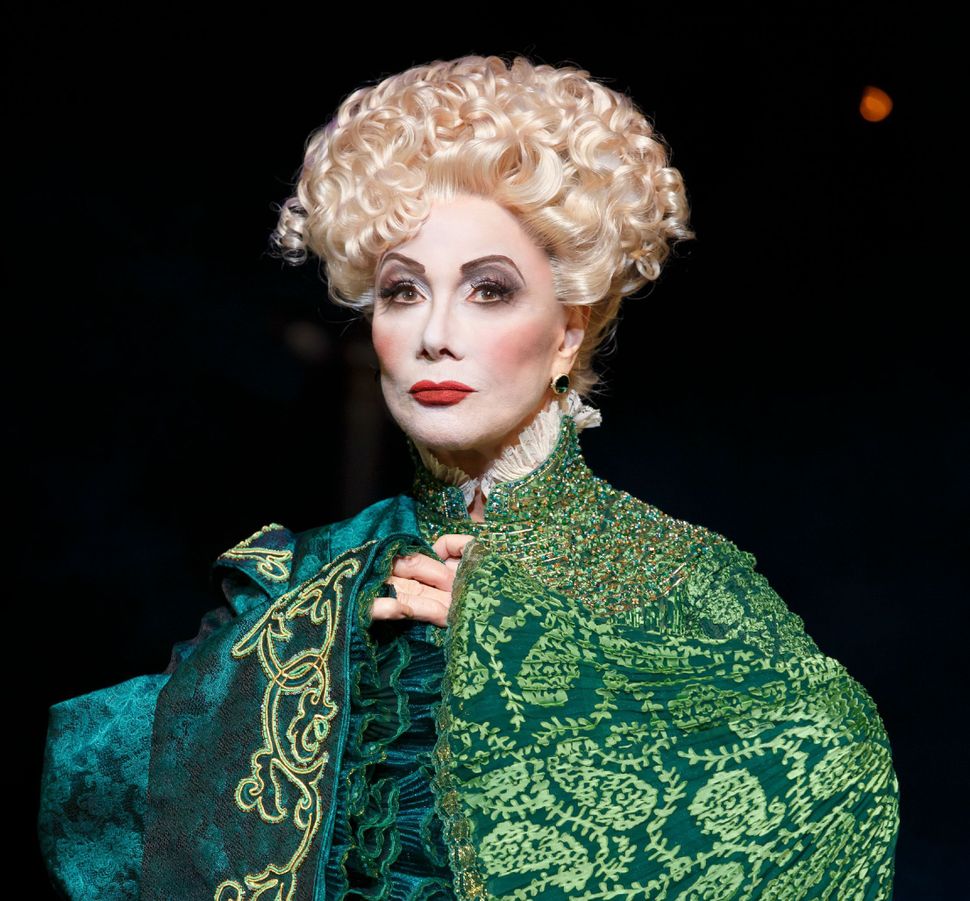 “How did you come to “Wicked”? I asked twice Tony-nominated Michelle Lee who inhabits the role of Madame Morrible — the headmistress of Shiz University and cohort of the Wizard who mentors [the green girl] Elphaba.

We were chatting in her dressing room at the Gershwin Theatre where two weeks earlier I sat next to a woman who told me she was seeing it “for the 10th time”!

“First start with how you pronounce your name” interjected Lee. I told her it’s ‘Masha.’” “Guess what!” she exclaimed: “My Jewish name is Masha-Leah!” “So we’re both named after a Moshe,” I smiled.

How did she come to the role? “They asked me and I almost turned it down. Being away from my family [in California]…but it was on Broadway! So I took a leap of faith into the volcano.” I asked: “How does it feel to play such a vicious character…did you have any latitude in your portrayal of this nefarious woman?” “It was [Morrible’s] character that exhilarated me…I had latitude as long as I got to a certain point. Her message is the whole piece of the puzzle. Not everything is black and white, but I think by the end of the musical you realize she is the black of the white— pure evil and ultimately the most evil character. This woman is desperate to climb to the top…use people to get there and one of them is The Wizard. And if the Wizard hasn’t the power—how then do I bring him what he wants?”

“What about [green] Elpheba? There’s that wonderful solo you sing ‘The Wizard and I.’” Tall, sinuous Lee — in pre-make-up mode — leaned forward on the sofa: “ It was her gleaning this amazing talent with this girl…that might make her most powerful…pitting Elpheba [The Wicked Witch of the West] vs. the Good Witch Glinda the Good. She coddles the girl, nurtures her tells her ‘I can make you wonderful, you have such talent…Elphaba does not do what she wants her to.” “Is there anyone in your life you modeled her on?” I asked. “No! I’m having fun. People don’t recognize me. They have no idea who I am.”

Lee, whom I’ve met in the past, boasts a curriculum vitae that includes her Emmy-nominated role as Karen in CBS’ “Knot’s Landing,” Broadway performances in, among others, “Seesaw”, “The Tale of the Allergist’s Wife” and “How To Succeed in Business”, informed: “I was conceived in New York and born in Los Angeles. My parents were from the Bronx and Brooklyn…I went to Sunday school but was not bat-mitzvahed. I married James Farentino—a non-practicing Catholic— and our son David was raised Jewish. We did all the Jewish holidays. When my son was bar-mitzvahed the rabbi told James he could come up on the bimah but could not say the aliyah. (Farentino died in 2012). We parted with a hug and a “zay gezunt” — be well.

In Carol de Giere’s 2008 biography “Defying Gravity: The Creative Career of Stephen Schwartz from “Godspell to “Wicked”, Schwartz [music and lyrics] summarizes “Wicked”’s essence as: “Its themes deal with ethical and philosophical questions: What is ‘wicked’ and what is ‘good,’ and what is the difference between how we see (and label) people in those terms and who they really are? Why are we so easily fooled by people who pretend to be good but whose actions are reprehensible? (There are certainly plenty of current examples in American life.).”

If you have not yet experienced this mega-hit spectacular musical with a timeless message, go and be wowed!