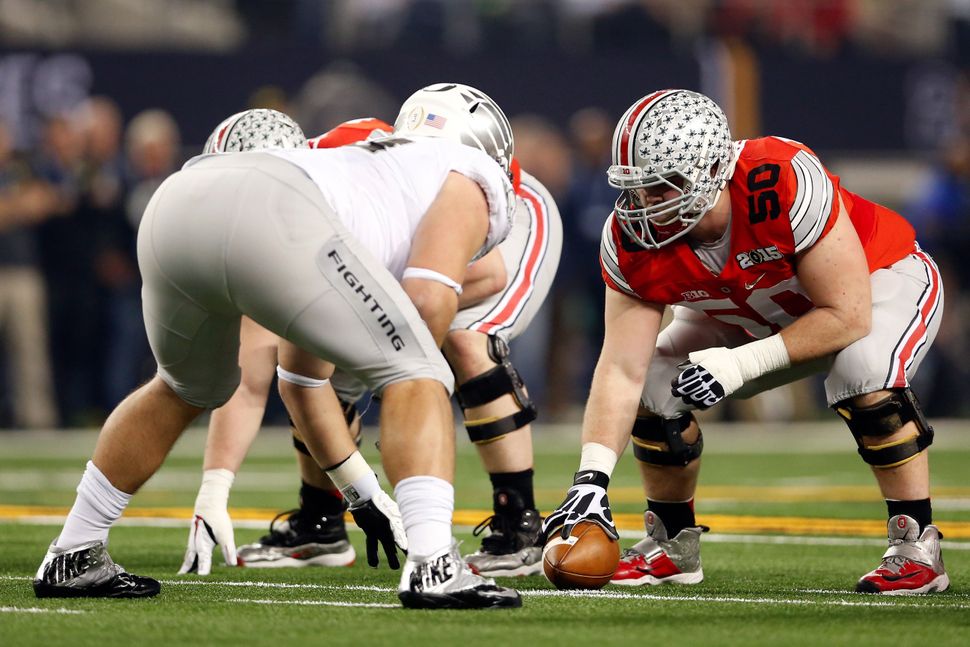 (JTA) — Ohio State may not be know who will be starting at quarterback as its season opener approaches, but the Buckeye who will be snapping is a sure thing: Jacoby Boren, the football squad’s Jewish center and newly named co-captain.

Boren, a senior, was named one of six co-captains last week by coach Urban Meyer for the defending national champions. He joins John Frank, an All-Big Ten Conference tight end who went on to a stellar career with the NFL’s San Francisco 49ers before becoming a doctor, as a Jewish co-captain in the rich history of OSU football.

The 6-2, 285-pounder, an Ohio native, will be anchoring an offensive line with four returning starters, including himself. Boren no doubt picked up a few pointers from his older brothers Zach and Justin; both excelled in recent years along the Buckeyes’ offensive front.

READ: Meet the Jewish 300-pounder from Hobart College heading to the NFL

Boren, who is majoring in sustainable plant systems, with an eye toward taking over the family landscaping business, is performing well in the classroom, too. He was named second team Academic All-America last year and is a two-time Big Ten Distinguished Scholar.

So who will he be taking his snaps for Monday’s Labor Day opener against Virginia Tech?

Meyer has yet to settle on J.T. Barrett or Cardale Jones, last year’s third-stringer who led the Buckeyes to victory in January’s national championship game against Alabama. Barrett also is a co-captain.

With Boren and his guys on the line blocking as expected, either should have success as OSU aims to break the plethora of school records set last season on offense.