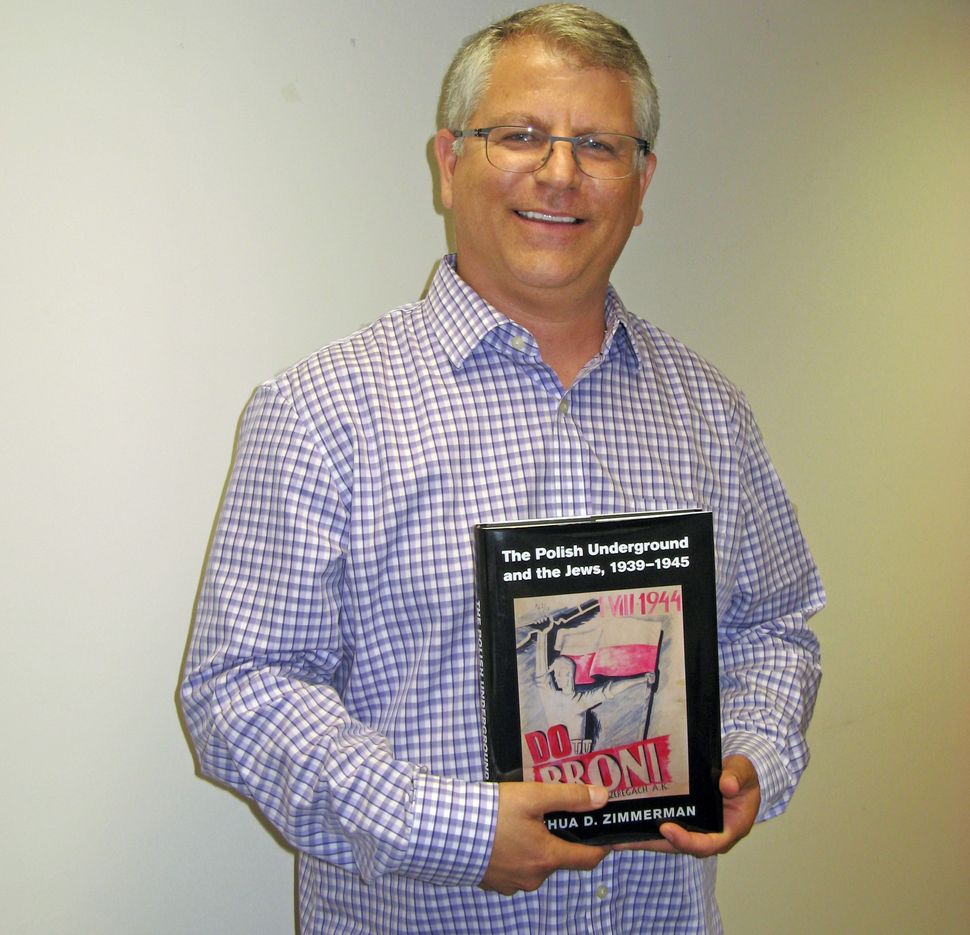 “I am always explaining — often to American Jews — that not all Poles were anti-Semites,” I told Joshua Zimmerman Yeshiva University Associate Professor of History and Eli and Diana Zborowski Professorial Chair in Holocaust Studies and Eastern European Jewish Studies” and author of the just published [Cambridge University Press] “The Polish Underground and the Jews 1939-1945” as we sat down for our interview at his office at Stern College’s campus.

Masha Leon: Benjamin Meed, a founder of the Gathering of Holocaust Survivors and the husband of Vladka Meed [who had been a courier between the Polish Underground and Jewish Ghetto fighters] once told me:’ it took ten Poles to hide one Jew.’ And I am here because a Polish peasant woman risked her life — and that of her family — to hide my mother and me during our escape from Warsaw.”

Joshua Zimmerman: “A lot of Jews have a problem hearing this and try to contest this… My interest [in this theme] began in 1987/88 when I was an undergraduate taking a course on the Holocaust and a student said, ‘My grandfather was a partisan and [he told me] Polish Partisans were as dangerous as the Germans and killed many Jews.’ At the time I was not aware of this Polish factor. I am a third generation American…and the [home conversation] was about the Germans and the Holocaust.”

ML: “Your book is like a crocheted history overview — ten pages of primary sources, interviews, testimonies it’s simply daunting and fascinating reading. What was the spark?

JZ: I came across the [2003] “Times” obit for Simon Wiesenthal’s wife. She had escaped from a labor camp and survived in occupied Poland ‘thanks to the Polish Underground’. I wanted to look into this further. At that time I already could read Polish. In 1991 I was in Krakow — totally engrossed in the Jewish aspect of Poland. What I ended up finding — in the Polish language studies of the Polish Underground—was that the subject of Jews is almost entirely absent except when it involved aid to the Jews. In similar studies, in English mostly by Jewish Holocaust scholars, when Poles appear it was as collaborating with Germans and murdering Jews. Neither was 100% correct… No one had done an impartial study. I ended up looking through archives in four different countries about the Polish Underground… testimonies of Jews and non-Jews—published and unpublished. At almost every turn I’d find [unknown] Jews who were in the [Polish] Home Army who had told their stories.

“In Warsaw’s National Library an archivist in 2005 showed me [an English] a manuscript “Poland War Years 1939-1945 written” by Stanislaw Aronson, a Jew who documents his escape from the ghetto and induction into the Home Army.” Citing other stories, Zimmerman added: “In 2005 I rented an apartment in Warsaw from an Israeli citizen who told me: ‘My father was the only physician inducted in 1942 in the Home Army.’”

Zimmerman recalled a speech that Jan Karski gave in Poland in 1991 during a Polish language course at the Nowym Collegium to an SRO crowd: “ Someone wanting to defend the good name of Poland got up and said ‘Many Jews say that there were many Poles who were anti-Semites during the war…. How can you now stand up and [not] say that was an assault on the good name of Poland…that it’s not true.’ Karski’s response was: ‘I am no longer a Pole. I cannot absolve you. This is a discussion Poles must have among themselves… about your guilt. I am an American now.”