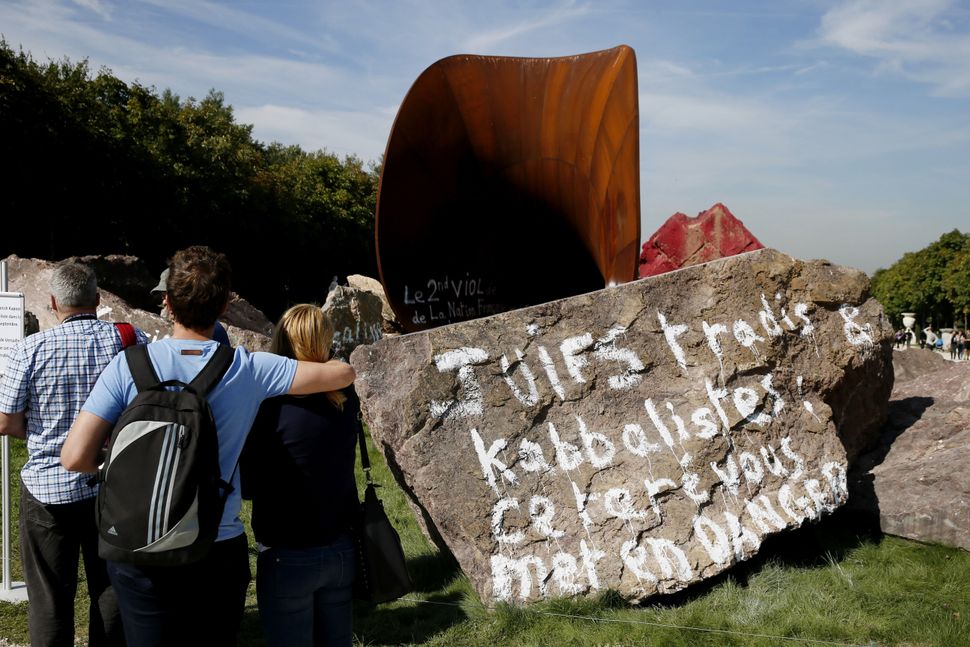 The biggest of this media trifecta was the vandalism on a sexually-suggestive piece nicknamed the “queen’s vagina” at the Palace of Versailles, right outside Paris —— and the artist’s fury that French officials ordered it covered up.

The 200-foot funnel-like sculpture (official name: “Dirty Corner”) was defaced with white spray-painted hate words including, “At Versailles Christ is King,” and “the second rape of the nation by deviant Jewish activism.”

The words were gilded over in gold leaf, under the artist’s direction, after local officials rejected his desire that they stay uncovered on the steel-and-rock piece as evidence of “the scars of the renewed attack.”

“We lost, can you believe it?” Kapoor in Moscow, where he launched a new exhibit Monday. “Some very racist, in my view, deputy from parliament took me to court. We were forced to hide the graffiti. It’s a terrible, sad thing.”

“You want me to pretend it didn’t happen?” said Kapoor, who is Jewish of Sephardic Iraqi origin and spent much of his youth living in Israel on a kibbutz. “It happened.”

The edges of the white paint can now be seen peeking out from the gold leaf.

France is still reeling from the deadly Muslim terror attacks on Charlie Hebdo and a Jewish grocery and sensitive to growing fears that Jews are not safe there.

“To attack the work of artists is to attack the universal values of culture – that is freedom and human dignity,” French Culture Minister Fleur Pellerin said in a statement to reporters. “This is an act that simply shows a fascist vision of culture.”

Kapoor was in Moscow Monday as art assistants started gilding the hate in Versailles. He spoke at the opening of his first solo show in Russia, at the Jewish Museum and Tolerance Center that opened three years ago in an old Moscow bus depot..

“I am interested in sculpture that manipulates the viewer into a specific relation with both space and time. Time, on two levels; one narratively and cinematically as a matter of the passage through the work, and the other as a literal elongation of the moment,” Kapoor said. 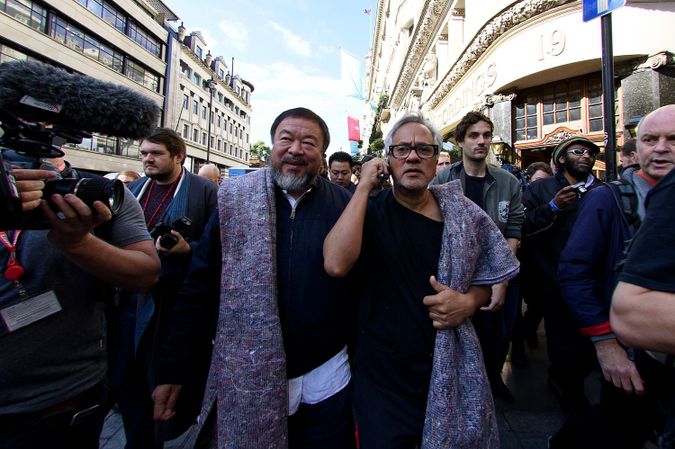 Before jetting off to Moscow, the activist teamed up with persecuted Chinese creative force Ai WeiWei in London for an eight-mile solidarity walk through the British capital to show support for Syrian refugees on mainland Europe — and refugees everywhere.

“This is a walk of compassion, a walk together as if we were walking to the studio,” said Kapoor. “Peaceful. Quiet. Creative.”

He and Ai urged leaders to keep the doors open and welcome families trying to leave behind wr and misery.

“This problem has such a long history, a human history. We are all refugees somehow, somewhere and at some moment,” Ai told The Guardian.