The Naked Woman Who Soaked In Hitler’s Bathtub 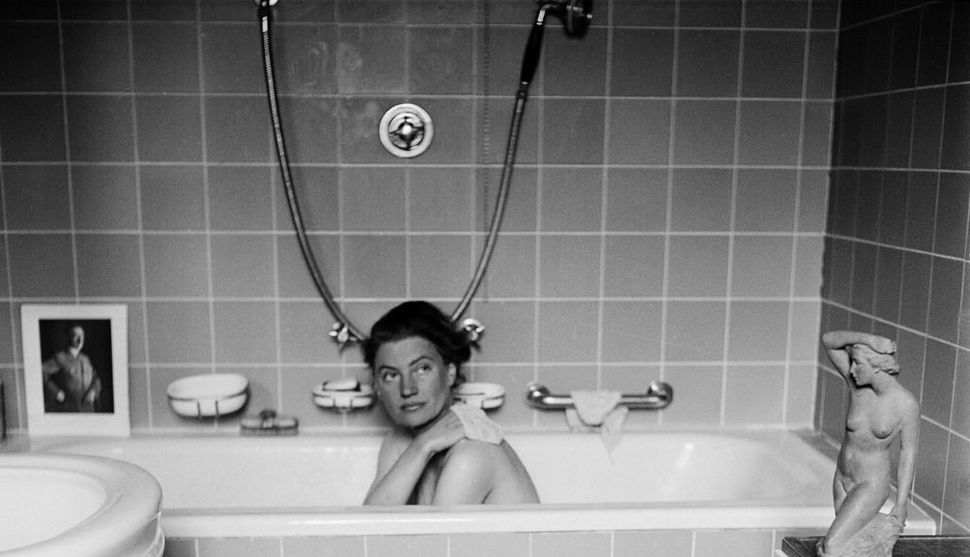 A young American woman soaks in Adolf Hitler’s bathtub, her muddy boots staining his bath mat, and an official portrait of the Fuehrer sits on the tub’s edge.

The woman is Lee Miller, the only female combat photographer in Europe during World War Two. She is pictured in Hitler’s Munich apartment on April 30, 1945, by fellow war correspondent David Scherman.

The image is one of the highlights of a new exhibition at London’s Imperial War Museum, “Lee Miller: A Woman’s War.”

“This was actually taken on the day that Hitler committed suicide, although Lee Miller didn’t know that until after the event,” said Hilary Roberts, research curator of photography at the museum, who put together the show.

Shortly before, Miller had toured and photographed the Dachau concentration camp. She and Scherman had then made their way to Munich, by this time under U.S. occupation, and headed for Hitler’s apartment, where they spent the night with a group of other people, the curator said.

“The key objects in the photograph are Lee Miller’s boots on Hitler’s bath mat, which when she arrived was pristine white, and when she left was covered with dirt from Dachau,” she said.

Miller walked away with more than just a souvenir snapshot of herself in Hitler’s tub. She also filched a few of his mistress Eva Braun’s personal belongings, which are on view in the exhibition: a smiling portrait of Braun, her powder compact, her large Art Deco-style perfume bottle, and her four-piece rose-patterned desk accessory set.

Before the war, Miller was a model, a Surrealist photographer, and a fashion photographer. Yet her concentration camp pictures are among the ones she is most famous for.

The show displays a few, including one of a group of women at Dachau who were forced into prostitution inside the camp and now awaited evacuation.

The exhibition’s focus is Miller’s depictions of women in Britain and elsewhere in Europe during and right after the war.

Her 1943 images of British women – factory and farm workers, uniformed drivers, nurses, and even a parachute packer – are not as bleak as those taken in the defeated Germany. One particularly chilling German image from April 1945 shows the daughter of a Nazi dignitary – Leipzig’s city treasurer – lying dead on a sofa after committing suicide with her parents.

“On the surface, they may appear to be documentary works, but her background in fashion and in Surrealist art is always there,” Roberts said.—Reuters

The Naked Woman Who Soaked In Hitler’s Bathtub