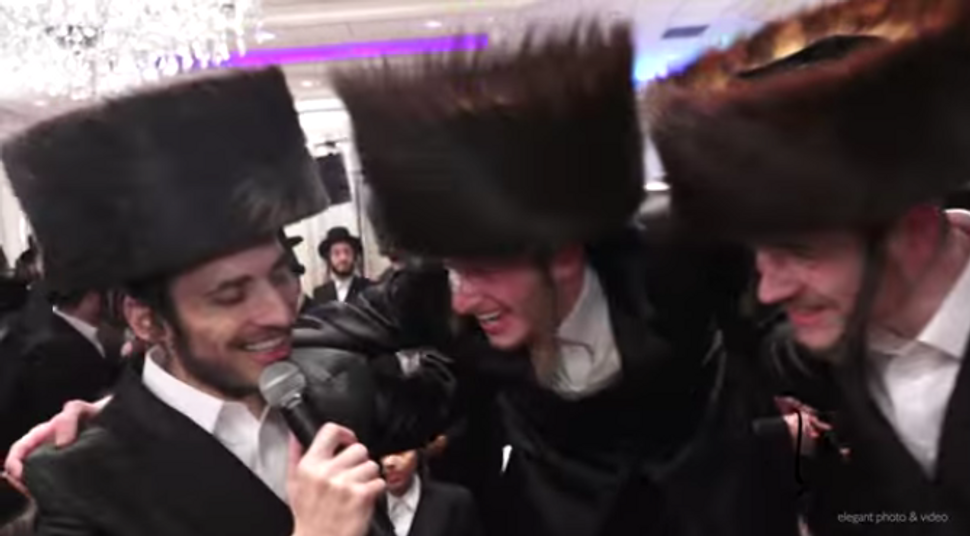 It’s rare today for a Yiddish song to become a sensation. It’s even more rare for one to go viral on Facebook and Twitter.

But that’s just what happened recently with the new music video for Chaim Shlomo Mayes (Mayesz)’s dance-hit “Bas-Kol” (Divine Voice/Bass Voice). The film, shot at a wedding, is quite cool.

For those already familiar with Mayes’ previous hits with musical partner Dudi Kalish, the music itself isn’t particularly surprising. The two Israeli Hasidic singers and music producers have been releasing remakes of popular Israeli and American songs in Hasidic Yiddish for years now. Instead of singing about sex, money, lost loves or other profane topics, the Kosher reincarnations of these pop hits are filled with words of spiritual encouragement.

The music video for “Bas-Kol” was created to promote the song in the Hasidic community but became a sensation outside of its targeted niche.

Many Israelis who chanced upon it were surprised by the video because they apparently had never seen Hasidic men behaving that way before. In fact, such scenes are quite commonly seen at contemporary Hasidic celebrations, albeit, usually not with such enthusiastic dancing.

Dudi Kalish and Chaim Shlomo Mayes are famous singers and composers who work in nearly all contemporary musical genres such as rock, rap and pop, as well as in more traditional Hasidic styles. Although they have become totally mainstream within the Hasidic world in the past few years their album “Rap in Yiddish,” which was released 8 years ago with music copied from such popular singers as Madonna, 50 Cent, and Michael Jackson created a massive scandal. Of all the songs on the album — called “Rap in Yiddish” — the song “Telephone,” a remake of this Michael Jackson song, is most worth checking out.

It’s also worth hearing Kalish’s song “Yesterday was Good,” which was set to the music of Shlomo Artzi’s hit “Moon.” The new Hasidic version of the song was a surprise hit in Israel, even getting mainstream airplay among typical Israeli Hebrew-language pop music.