Brooklyn Sculpture Says It All in a New York Way: ‘Oy’ and ‘Yo’ 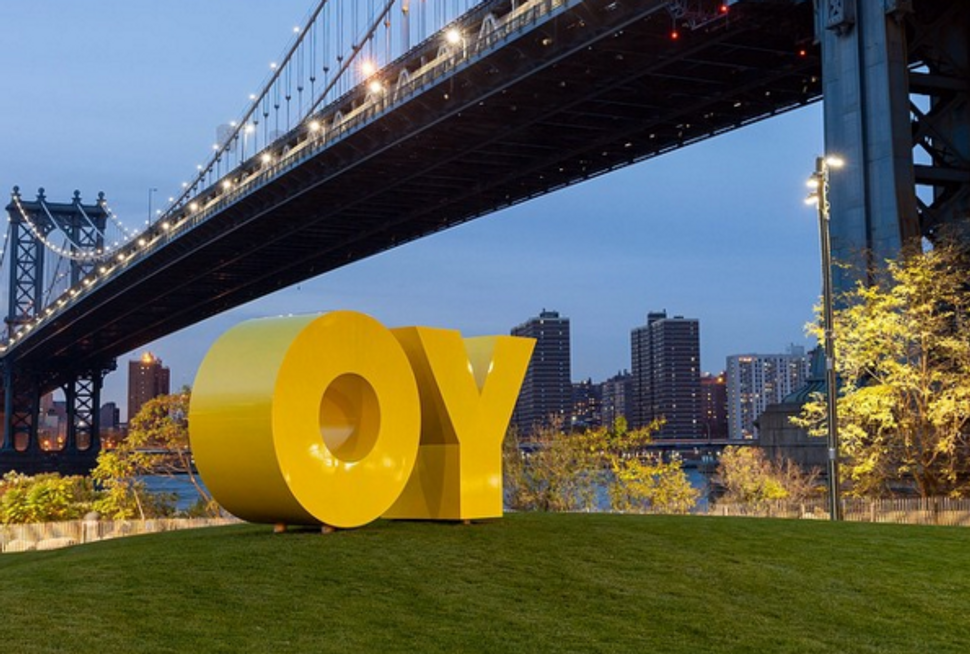 A sculpture installed in a Brooklyn park says it all in an expressly New York way: “oy” and “yo.”

Artist Deborah Kass created the bright yellow sculpture, titled “OY/YO,” that was placed this week in Brooklyn Bridge Park, near the East River separating the two boroughs, according to reports. It is scheduled to remain there until August.

Those viewing from Brooklyn see “oy”; Manhattanites see “yo.”

“The fact that this particular work resonates so beautifully in so many languages to so many communities is why I wanted to make it monumental,” Kass told The New York Times. “This is New York, baby. We’ve got it all. And the sculpture covers it all.”

The work is made of aluminum and paint. Much of Kass’ work makes reference to other modern artists, including Gertrude Stein, Andy Warhol and Jackson Pollock.

What does the sculpture using the two oft-used expressions by New Yorkers mean? Kass told the Times that it was best left open to interpretation.

“Oy” entered the English lexicon in the 1890s, while “yo” has been used as far back as the 15th century in Middle English, Peter Sokolowski, the editor at large of Merriam-Webster, told the Times.

Brooklyn Sculpture Says It All in a New York Way: ‘Oy’ and ‘Yo’