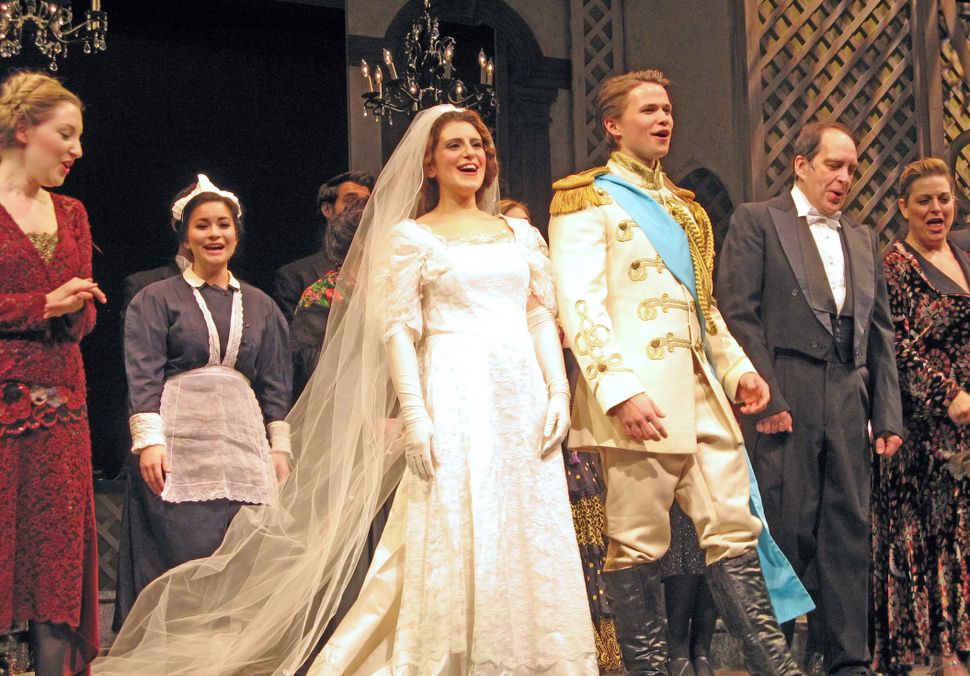 This is the first since 1920 that the show has been staged. “It started off as a concert reading at Rutgers… then a concert version in August 5, 2015. We saw the response, put the team together, set design, costumes — all beautiful! — rushed auditions, Actors Equity! We had a short time…and extraordinary team!”

With a cast of more than 20 — most not Jewish — and most non-Yiddish speakers, I was astonished at the cast’s comfort in Yiddish as though to mameloshn (mother tongue) born. “Over 200 auditioned — from the opera and operetta world — not just theatre,” said Wasserman. It was thanks to” Edit Kuper, a Yiddish coach from Montreal, and [conductor and music director] Zalmen Mlotek who took over when she left… Rachel Policar (Goldele) and Jillian Gottlieb (Khanele) have Jewish backgrounds… this was their first experience singing/speaking in Yiddish [Jillian enrolled in the 92nd St. Y to study Yiddish.].

“The only way it can happen so quickly from page to stage is the talent of the team. The direct connection between the audience and performance is magical…. There wasn’t a nuance where the audience didn’t get the irony, the humor, of what this piece represents. They were on their feet before the last note was sounded!” Wasserman mused: “We have to imagine ourselves in the audience in 1923 working in a factory and wanting to come to the theater. In that dream, a fairy tale — [we were] somehow sitting in those seats.”

I told Bryna how impressed I was by Policar and Gottlieb and awed by Cameron Johnson’s performance as Misha — Goldele’s love — whose superb Yiddish, and Russian articulation plus! Kazatzke dance routine is right on key! During the post performance reception, I asked him if he was Russian. He smiled, “I’m Irish from Canada!”

Co-directed by Motl Didner choreography and musical staging by Merete Muenter, and era-accurate lavish costuming by Izzy Fields — if you listen carefully you may catch a fleeting Gilbert and Sullivan moment, a soupcon of a [Yiddish] Nelson Eddy/Jeanette McDonaldish love duet between Goldele (Policar) and Misha (Johnson) with the entire production seasoned with a “Yankee Doodle” American fervor.

His list of “thank you’s” highlighted Museum Chairman Bruce Ratner for “his vision that brought us here.” Wiesenfeld elaborated on the planned transformation of “the existing space into a bricks and mortar theater. We [the Folksbiene] will finally have a home!”

The audience—on its feet—joined the cast in singing a rousing “Mayn Goldele” (My Goldele). Go and Enjoy! I am still humming some of the melodies.