Marco Rubio Dons a Kippah and Wishes You a ‘Boot Shabbos’ 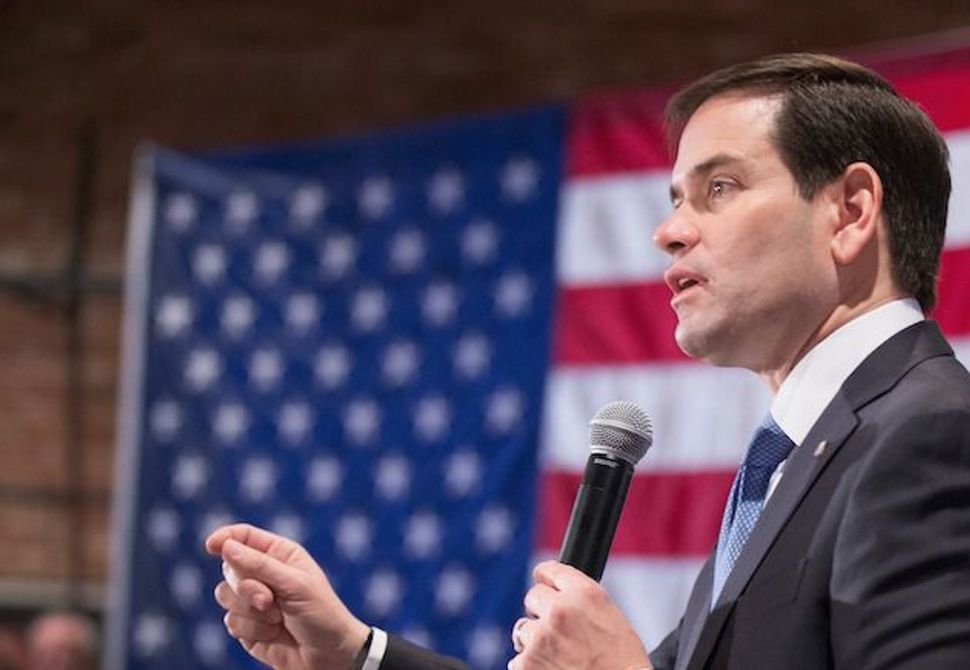 In preparation for Monday night’s Iowa caucus, Marco Rubio ran across Yarmulke entrepreneur and peace-loving loving Jew, Marc Daniels, who offered to give Rubio the bump in the polls he so needed.

He handed Rubio a red yarmulke that had Rubio’s name emblazoned in gold on it and asked the GOP candidate to wish the camera a “Gut Shabbos.”

But Rubio, who is not learned in the ways of Yiddishkeit, was stumped by the phrase.

The entire moment was captured by a bystander on video and immortalized in the New York Times’s coverage of the Iowa campaign.

Rubio did finally get the phrase right, and, may we say, the red yarmulke suited him well.

While Marco Rubio did not win the Iowa caucus, he did much better than he or anyone expected, trailing a little over a percentage point behind Donald Trump. So maybe Daniels did give him that little bump he had been praying for.

Rubio is definitely winning some Republican Jewish hearts, including the endorsement and support of Jewish billionaire Paul Singer.

As for Daniels, he ended the Iowa caucus at a party for Bernie Sanders.

You can still buy your custom candidate yarmulkes on Daniels’s site for a mere $10. Quite a steal, really! No Trump-kippahs, though, because, as Daniels once yelled at a Jeb Bush rally, “Trump is a putz!”

Marco Rubio Dons a Kippah and Wishes You a ‘Boot Shabbos’