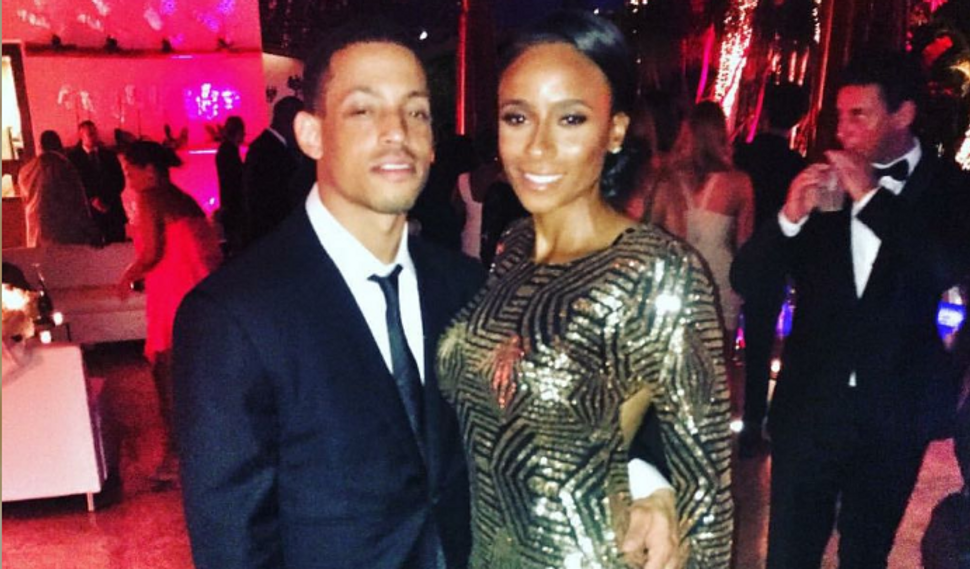 Sometimes you can really put your foot in your mouth on Twitter.

Miko Grimes, the outspoken wife of Tampa Bay Buccaneers star cornerback Brent Grimes, got into some hot water on Twitter after she used anti-Semitic language to critique the Jewish owners of her husband’s former team, the Miami Dolphins.

The rant may not have played too well with his new team, who are also members of the Tribe.

This gets a bit convoluted, so let us explain.

ESPN reports that Miko Grimes — whose Twitter rants have gotten her and her husband in trouble before — was alluding to Dolphin’s owner Stephen Ross and executive vice president of football operations Mike Tannenbaum when she sent out a tweet saying, “Gotta respect ross for keeping his jew buddies employed but did he not see how tannenbaum put the jets in the dumpster w/that sanchez deal?” 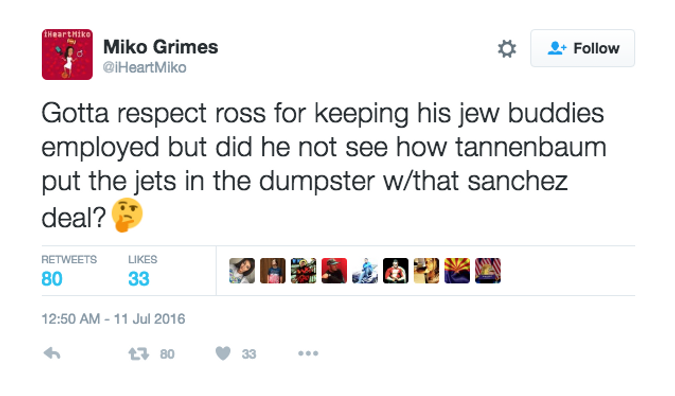 As it turns out, the family of her husband’s current team — the children of the late Buccaneers owner Malcolm Glazer — are descendants of Jewish immigrants from Lithuania and lost family members in the Holocaust. According to ESPN, Malcolm Glazer contributed to the construction of the Palm Beach Synagogue.

With emotions running high mere weeks after news of the the anti-Semitic “echo” and only days after Donald Trump’s Star of David mishap, the backlash against Miko Grimes was swift and unrelenting.

U think im gonna tweet racist remarks in an attempt to offend TWO PEOPLE? Lmao!! Why would i? Why would i want to offend “jewish” ppl??

No i dont. I dont hate anyone. RT @scotland5finest: @iHeartMiko we get it you hate jews, join the club.

At this point I’m asking @iheartmiko… please SHUT THE FUCK UP! Sincerely, the Jew buddy of ur husbands who first got him trained in MMA

In a statement to ESPN, Miko Grimes defended herself, saying:

“When I wrote ‘jew buddies’ I was speaking about how a lot of communities (Jewish, Christian, gay, sometimes fraternities and sororities) will hire their ‘own people’ for jobs before others. That’s a fact! Why people find facts offensive is strange to me. And now im a racist? Lmao! How?”

She added: “If what I said is racist or anti-Semitic, why isn’t it also racist to only hire their own? America is just an easily offended, fake reacting, bunch of cry baby [expletive]s! Anyone that thinks I’m a racist needs to build a [expletive] bridge and get over it. I’m not a racist, I’m a realist.”

The Dolphins and Buccaneers have yet to release comments but in the past, Dolphins owner Stephen Ross admitted that that Miko Grimes’ unchecked social media posts had a lot to do with why her husband no longer plays for Miami.

“I think everybody knows what she represented. I thought it was best that the Dolphins move on from Brent and Miko,” Ross told reporters.