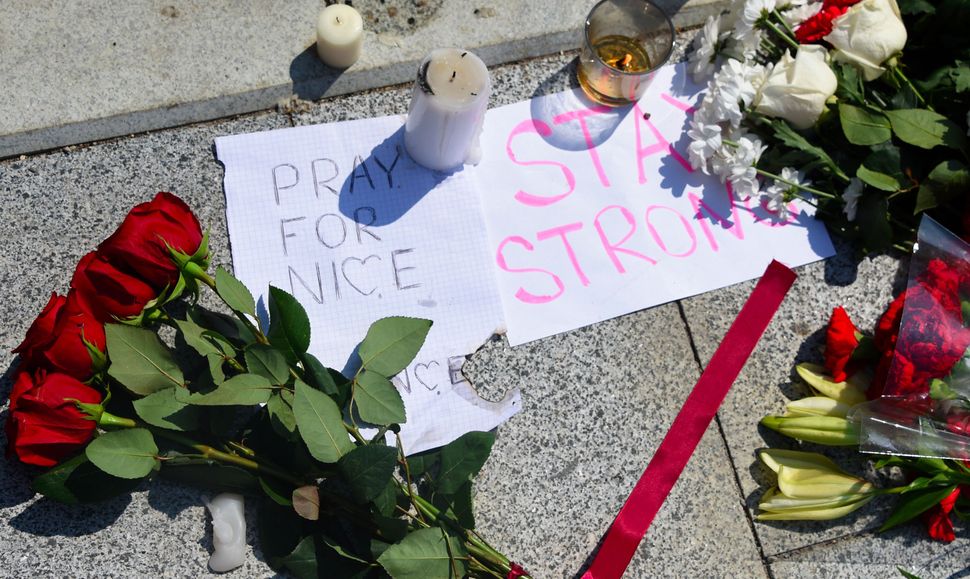 Notes and flowers for the victims of the Nice terrorist attack outside the French embassy in Moscow July 15, 2016, Image by Getty Images

The attacker drove a truck into a crowd watching fireworks in honor of the French national holiday Bastille Day.

Among the dead are two American citizens.

Benjamin Netanyahu
In a letter to French President Francois Hollande, the Israeli prime minister offered his condolences for the attack and said “Israel is your close partner in the fight against Islamic terrorism.”

Prime Minister Netanyahu sent a letter of condolences to French President @fhollande in wake of the #NiceAttack. pic.twitter.com/32kutNou1x

Calling it a “senseless tragedy,” the daughter of the presumptive Republican nominee shared this illustration and her heartache over the attacks.

Heartsick over what’s unfolding in France. My thoughts and prayers go out to everyone affected by this senseless tragedy. #Nice #France #PrayForNice

Jill Stein
The Green Party presidential candidate argued in a series of tweets against a military response against ISIS in light of the Nice attack, saying a weapons embargo and diplomacy were favorable.

The M.O. of ISIS is to pit humanity against itself – to bankrupt us morally, financially, & spiritually. We must resist this. #NiceAttack

I’m deeply grieved for the people of France. This attack is horrifying. I #PrayForNice & for ALL affected by this unimaginable violence.

Simon Cowell
The “America’s Got Talent” judge, who has Jewish heritage on his father’s side, said he was “shocked” by news of the attack.

Just heard the terrible news from Nice. I am shocked. My thoughts and prayers to all affected.