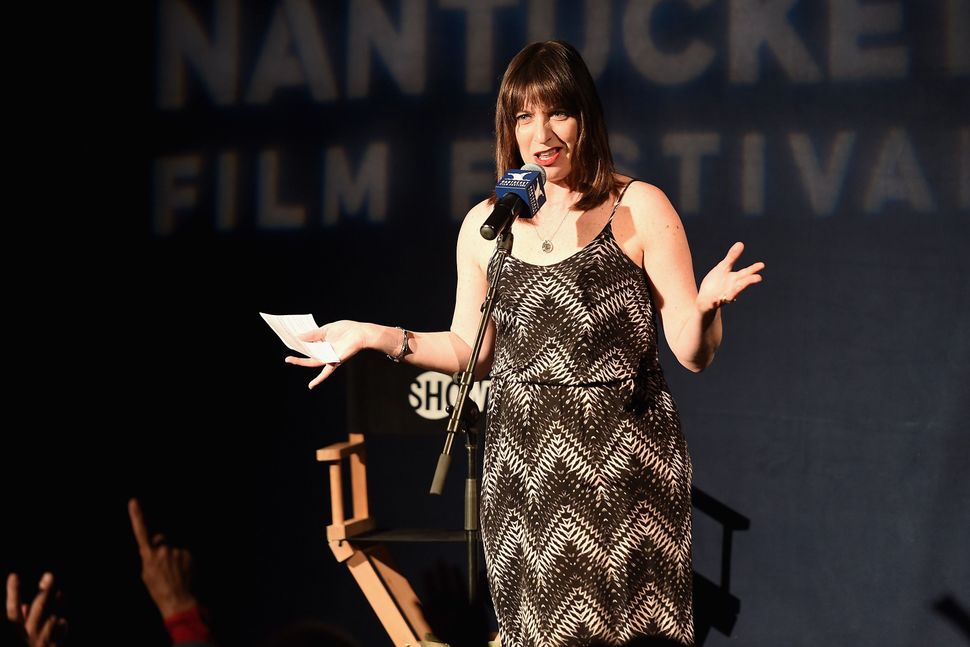 On a recent summer Thursday, the cramped basement performance space of Brooklyn’s Union Hall filled with groups of friends, couples on dates, and a few loners who gave the impression they were there every night. It was about the crowd you’d expect at a night of standup comedy, which New Yorker cartoonist Emily Flake, as she took the stage, found a little bizarre.

“It’s weird that you’re here,” she said. “I think you just want to be mean about kids.”

Despite that moniker, the evening featured a surprising dearth of stories about children’s bodily fluids, although several of the female comedians present dwelled on the perils of lactation, and a notably graphic segment from Nick Stevens dealt with the procurement of a certain fluid needed for in vitro fertilization. The kids, on the other hand, had some great interactions with material objects. Ophira Eisenberg, host of NPR’s “Ask Me Another!” and, with Flake, co-creator of “Shitshow,” described sorting through her infant son’s shorts pockets to find aspirin, matches, and $20; she reasoned that he might be a miniature delinquent, but it’s also possible his parents just understand that a baby with pockets can also be understood as a squalling purse.

Speaking with the Forward over the phone, Eisenberg explained the impetus for “Shitshow.”

“I feel like there’s all these women and men in Brooklyn who don’t have exactly standard lives and probably have a lot to say about parenting,” she said.

Was she right? Well, she said, “the people who did have kids were like ‘we need more of this’ in a hungry, deep-throated moan.”

“Clearly it’s tapping into some need for a lightening up,” she laughed.

The night in question was the second installment of “Shitshow,” which Eisenberg said she and Flake hope to make a semi-regular occurrence at Union Hall. It featured comedians both upcoming and well-known doing standup, singing, and, in the case of Flake, showing off a series of hilariously grim parenthood-themed cartoons.

Setting aside Stevens’s segment, which featured a snapshot of the graphic, uh, encouragement he was given to help with his role in IVF, some of the evening’s rudest jokes came from Caroline Rhea of “Sabrina the Teenage Witch” fame. (Her appearance prompted a squeal from a reporter in attendance; not this one, ok, maybe this one.) She was grateful that her daughter wasn’t born a Scorpio, she said; “I didn’t want her born that good at sex and hating other people.”

Jokes about the oddities of parenting in Brooklyn came up in abundance. The comics traded grievances over a wildly expensive lactation consultant, who they agreed was both mysterious and ineffective; Flake and Eisenberg mooned over the affordability of Catholic school in a landscape of pricy private schools; Eisenberg, a resident of the notoriously familial Park Slope, confessed to her inner instincts as a troll.

“I always think of things I want to post on Park Slope Babies to f—k with people,” she said. “Is anyone else finding their baby is eating a lot of their dog food? Anyone else thinking about waxing their baby’s eyebrows? Guys! I think my baby’s allergic to coffee!”

It would have been easy for the uninitiated to leave the event thinking parenthood was a lot of suffering, with only humor as a reward. (As the evening progressed, the same journalist who squeaked at Rhea watched her companion’s eyebrows creep timidly but inexorably towards his hairline.) Thank goodness for the miracles of WiFi, which let Eisenberg check her sleeping son’s babycam, a task she chose to share with the audience over the projector. We might have heard tales of great expensiveness, mess, sleeplessness, and existential questioning, but the actual sight of a baby changed the mood.

“It’s like a puppy,” Eisenberg said. “You could have them doing the most unattractive thing, but you flash them and everyone’s like, that’s adorable.”