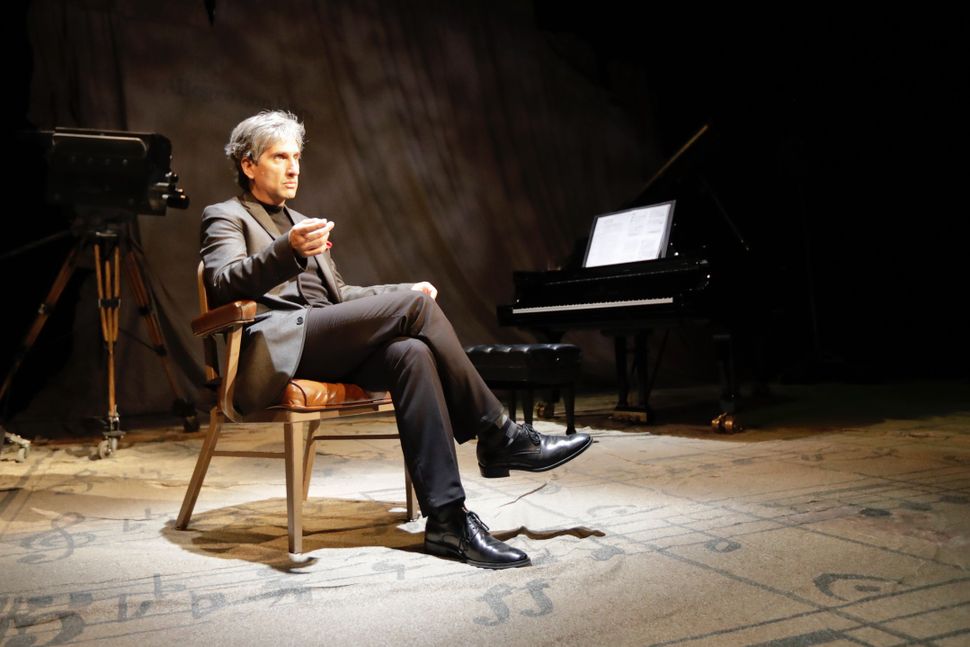 Filing in to 59E59 Theaters for “Maestro”— Hershey Felder’s bravura impersonation of and tribute to Leonard Bernstein—ticketholders were greeted with a stage projection of archival TV footage showcasing a young handsome Leonard Bernstein in lecture mode.

Felder—as Bernstein—in word and at the keyboard—launches this autobiographical-cum-musical recitative by recalling his father Samuel Bernstein’s antipathy to piano playing which he considered “idol worship.” Yet, he nostalgically recalls his father singing an “oy doy doy” nigun and articulates the name as Bernshteyn (as did my father [his distant cousin]). “My son is not going to be a klezmer!” Undeterred, Felder/Lenny the pianist-composer recalls teaching kids for $1 a lesson—enough to pay for his own at the Conservatory.

Felder deftly lauds and dissects other composer’s works with surgical—albeit oft comical—precision. “I was going to take over where Gershwin left off, wanted to be the next great American composer.” Alternating between performance artist at the piano and autobiographical raconteur, Felder addresses the audience in a quasi-intimate confessional mode rattling off a roster of idols’ warts and genius. He recalls Dmitri Mitropoulos, the Greek conductor “with the cobalt blue eyes”, how at first sight of Aaron Copland—“my favorite of the contemporaries, “I almost fell out of the balcony” comparing himself to “ bobby soxer swooning over Sinatra.” Felder sings and mimes accents of legendary icons recalling indelicately “Fritz Reiner… [who] looked like he had sex once and did not like it….” The composer list goes on…..

“There’s that fateful morning phone call” informing him that conductor Bruno Walter was ill and “Rodzinski is nowhere to be found!” HE! Lenny! “will be conducting the New York Philharmonic at 3 p.m. which will be broadcast across the entire nation!” A senior couple near me visibly reacted, as no doubt they recalled that historic moment. Not only did this transform Lenny’s life, it transformed the musical landscape for TV America.

Felder recalls the pressure “following the downbeat to Schumann’s Manfred Overture…. It was November 14, 1943 and a 25-year old skinny Jewish kid conducting one of the greatest ensembles in the world!” His father in the green room was kvelling: “Yingele, now I can see! All of it is possible—you will finally be a mentsch.” Felder/Lenny declares: “That’s when I decided to dedicate my first Symphony for soloists and orchestra— my ‘Jeremiah Symphony- to my father.” He articulates the Hebraic text and performs the theme at the piano: “Aicha, Yashvah Badad Hair Rabati Am Hait K’Almanah…. This melody and this text is directly drawn from the thousands years’ old ancient Jewish chanting ritual of Lamentations.”

Detailing the ecstasy and conflicts of Lenny’s rollercoaster marriage to Felicia Montealegre with its tragic detour— Felder alludes to Lenny’s lover affairs with men, describes his love for his children…the agony of Felicia’s cancer as well as the grinding 10-years’ long birth pangs of ”West Side Story” boasting: “We changed musical theater in this country forever!”

During my post performance chat with Felder I told him that following months of correspondence and telephone conversations with Lenny we planned to meet for lunch to reminisce about our family connection and Litvak roots. I remember telling Lenny that in his musical “Candide” the character Cunegonda—in her delightful solo “I’m Easily Assimilated”— sings that she comes from Rovno Gubernie (county). Based on our families’ residence, I suggested to Lenny “perhaps it should have been Grodno Gubernie.” We never had that lunch. Two weeks after our conversation—Bernstein died. Don’t miss.