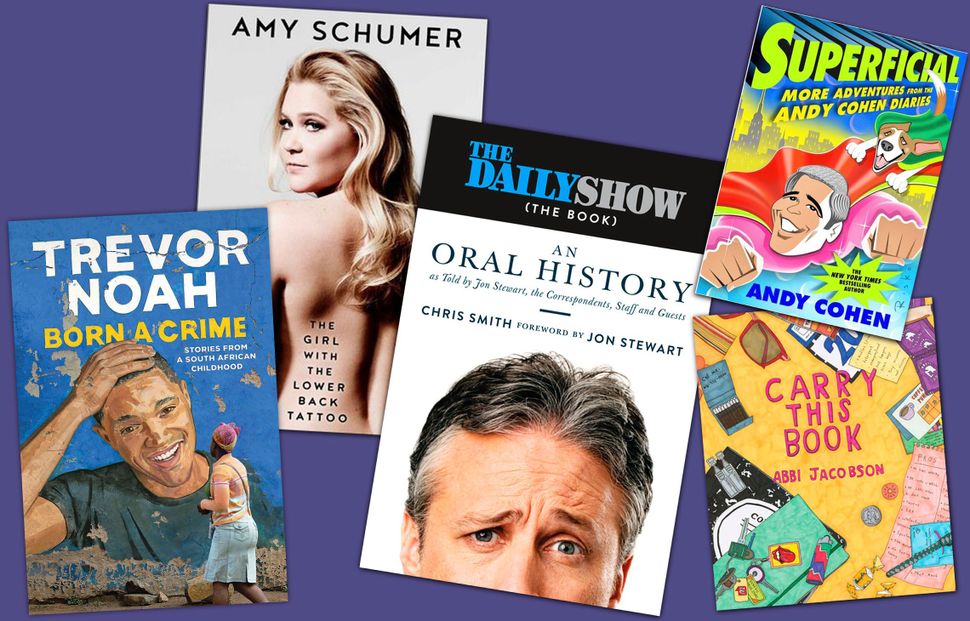 Curl up with this year’s best reads from some of the biggest, funniest Jewish names in pop culture.

The Daily Show: An Oral History

This comprehensive behind-the-scenes look at “The Daily Show” features voices from the show’s correspondents and staff and from Stewart himself. There’s dish on Stewart’s fights with Roger Ailes and Wyatt Cenac, his relationship with Bill O’Reilly and his first pick for his successor (hint: it wasn’t Trevor Norah), and a look at how the Bush administration help catapult “The Daily Show” to stardom.

Ever wonder what Hillary Clinton carries in her purse? What’s in Donald Trump’s weekender bag? Beyonce’s clutch? “Broad City” creator/star Abbi Jacobson has imagined all that — and much more — for you in her illustrated, jam-packed look into the satchels of the rich and famous.

The Girl With the Lower Back Tattoo

Amy Schumer brings all the laughs, tears and endless life wisdom in her debut memoir. The comedian chronicles her childhood growing up on Long Island, her early days as a struggling stand-up comedian and stories galore of sex, love and family. Oh yeah, and that one time her voice cracked during her bat mitzvah ceremony.

Born a Crime: Stories From a South African Childhood

Trevor Noah, host of “The Daily Show,” gives readers a raw account of growing up in apartheid-era South Africa. He chronicles his childhood and teen years of struggling to fit in as half-white, half-black, being bullied by darker-skinned children and creatively negotiating for popularity with the cool kids. The book also serves as something of a love story between himself and his mother, who, during their darkest days, once had to cook him mopane worms and spinach, “the cheapest thing that only the poorest of poor people eat.”

Thea Glassman is an associate editor at the Forward. Contact her at glassman@forward.com or on Twitter, @theakglassman