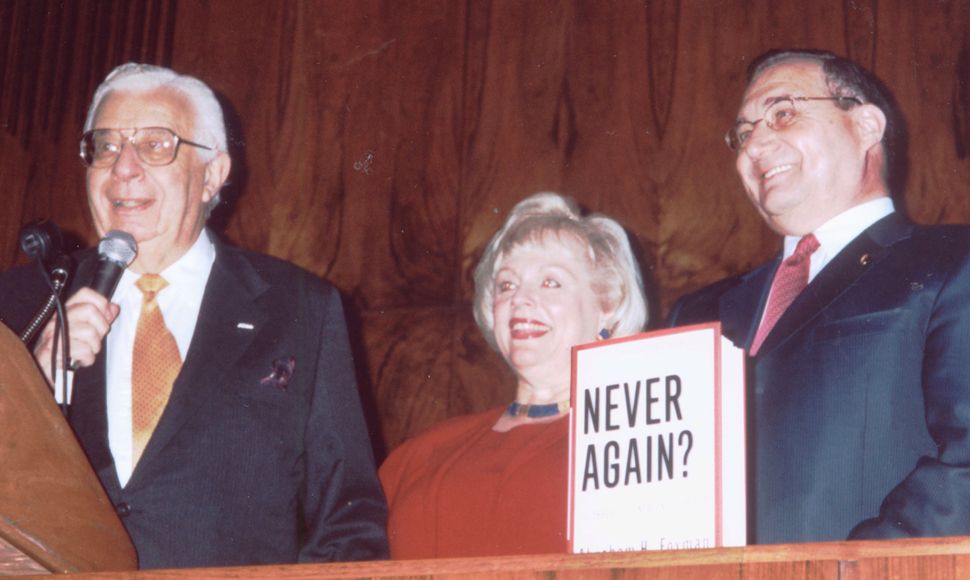 Jack Rudin—who died at 92 on December 2—had been among the 300 “brothers” and “sisters” [including the Forward’s Sam Norich] at the Jewish Labor Committee’s Human Rights Award March 14, 2001 Dinner at the New York Sheraton that honored then AFL-CIO president of the Building and Construction Trades Department Edward Sullivan and Jack Rudin’s younger brother Lewis Rudin.

Jack Rudin introduced me to UNITE’s president Jay Mazur, who greeted me with “I know who you are! I’m one of your readers”. From the podium he proclaimed: “The Rudin brothers never forgot their roots. Lewis grew up in the Throgs Neck section of the Bronx…Lewis and Jack and family represent the best of the Big Apple. Their legacy extends beyond the structures they have erected. It includes the organizations they have supported and the climate they helped create to make New York a stronger, more dynamic, more compassionate city.”

Sitting at a table away a few feet from the dais, Jack Rudin kept deflecting all personal-aimed “mazel-tovs” insisting: “Tonight is my brother’s night.” He then surprised me by informing me that he first met me—and my husband Joe— in1988 at the post-theatre party for Joseph Papp’s production of “Cafe Crown.” Wagging his finger as if to underscore the texture of his recollection, he said: “It was at Sammy ‘s Romanian Steak House…over a plate of gribines (chicken skin cracklings).”

During a break in the evening Jack Rudin introduced me to Dr. David Abramson whom he touted as an “unsung hero of the Western world who saved my brother Lewis’ eyesight.” Rudin also insisted that Dr. Abramson tell me about his being perplexed by the unusual number of Holocaust survivors who have “cancer of the eye—a form of melanoma.” “What was the common denominator?” I asked. “They were all in camps—some worked for I.G. Farben, some in munitions plants. Statistically this kind of eye cancer occurs in only six per million—I’ve just seen my 27th patient—the Holocaust survivors’ ratio is off the charts.” Would I write something about this? Jack Rudin interrupted: “Is there anything we can do? “ For years after that evening— whenever and wherever I met Jack—he would ask me wistfully, “Do you remember the night you met my younger brother Lewis? Wasn’t he something?” (Lewis died in 2001).

For a number or years Jack Rudin and his wife Susan were being honored by various organizations. On June 2,1999 at the time when his firm was building the Reuters Building in Times Square, they were honorees at the “Women in Need” dinner at the New York Sheraton —an organization that annually served more than 2400 homeless and disadvantaged. women.

A standout event hosted by Jack and Susan Rudin at the Four Seasons was the October 21, 2003 launch of [immediate past director of the ADL] Abe Foxman’s book “Never Again? The Threat To The New Anti-Semitism”(Harper San Francisco). That gathering had the “tam” (flavor) and energy of a communal Jewish Summit. Following his welcome remarks and introduction to Foxman’s recitative, Jack Rudin mingled, schmoozed and was warmly greeted by the champagne sipping, nibbling on delectable finger food assemblage that included—among others— Michael Steinhardt, Kenneth Bialkin, Samuel Pisar, Lester Pollack, Seth Lipsky, Robert Morgenthau, Elie and Marion Wiesel, Vladka and Benjamin Meed.

As they say in Yiddish—-: “A Demb Is Gefaln”-a giant oak tree has fallen.