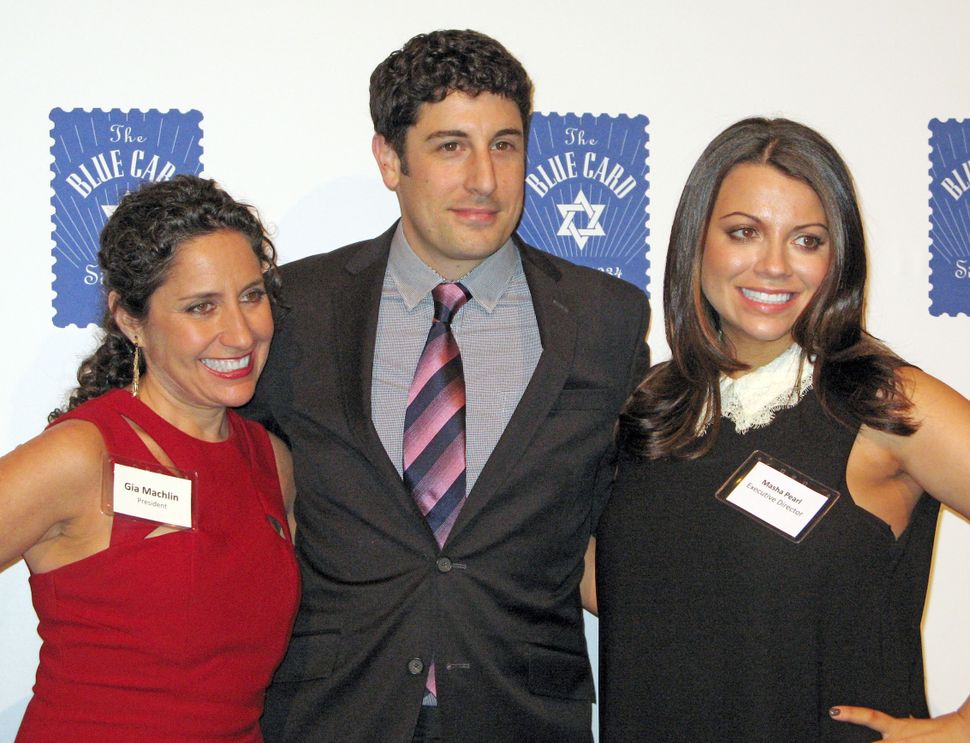 Emcee Jason Biggs (“”American Pie” trilogy, Larry Bloom in “Orange Is The New Black””) said he was honored at being emcee at this “still active” 82-year old organization serving 100,000 Holocaust survivors living in the United States. “Many people are surprised that there is still a need for an organization like the Blue Card. It is the only charity in the United States whose sole mission is financial aid to destitute survivors. The closest thing to family, it is a station of last resort—dental service, nutrition, eyeglasses, hospital visitation. In this room are children and grandchildren of original Blue Card [clients].”

Tony Award, Drama Desk and Outer Critics winner Linda Lavin helped transform the multi-tiered dining room with its floor-to-ceiling view of 59th cross-town traffic into a theatrical wonderland. Blue Card Chairman of the Board Michael Lissner informed: “As a child of survivors —having grown up in the survivor community, I had the honor to meet hundreds of survivors and hear their heart-wrenching unimaginable accounts of the Holocaust. I am proud to introduce to you Kati Martin who will present the Richard C. Holbrooke Award for Social Justice to Senator Charles “Chuck” Schumer.”

“This is the fifth time I have presented the prize named after my late husband Richard Holbrooke,” said Martin. “And tonight I am presenting it to a man who was Richard’s great friend and comrade-in-arms—always for the right cause…. Richard was the child of two refugees—and he married one himself.”

“I want to thank Masha Pearl and everyone at Blue Card for the award—in the name of a man who was a diplomat in the fullest sense of the word. Richard was my friend who would proudly tell me he was Jewish—even though you wouldn’t know I from his name or his visage. He fought for peace wherever he went and in which capacity he served.”

“I grew up learning about my great-grandmother who in 1941 when the Nazis invaded Ukraine/Galicia, the Nazis and the SS asked her to gather all her children and grandchildren on the porch and told her ‘You are coming with us!’ She said, “We will not leave.” They machine-gunned her and all seventeen down! With anti-Semitism on the rise in Europe and unfortunately in too many places in America, our task is more important. We must always continue to teach our children and our children’s children to continue to take care for the survivors. I promise you that I always try to be what my name is—Shomer—watchman, guardian…fighting for survivors seeking justice on their behalf wherever it can be found. We bear the responsibility—Zachor—Remember— a moral, sacred imperative-an 11th commandment for the Jewish people.”