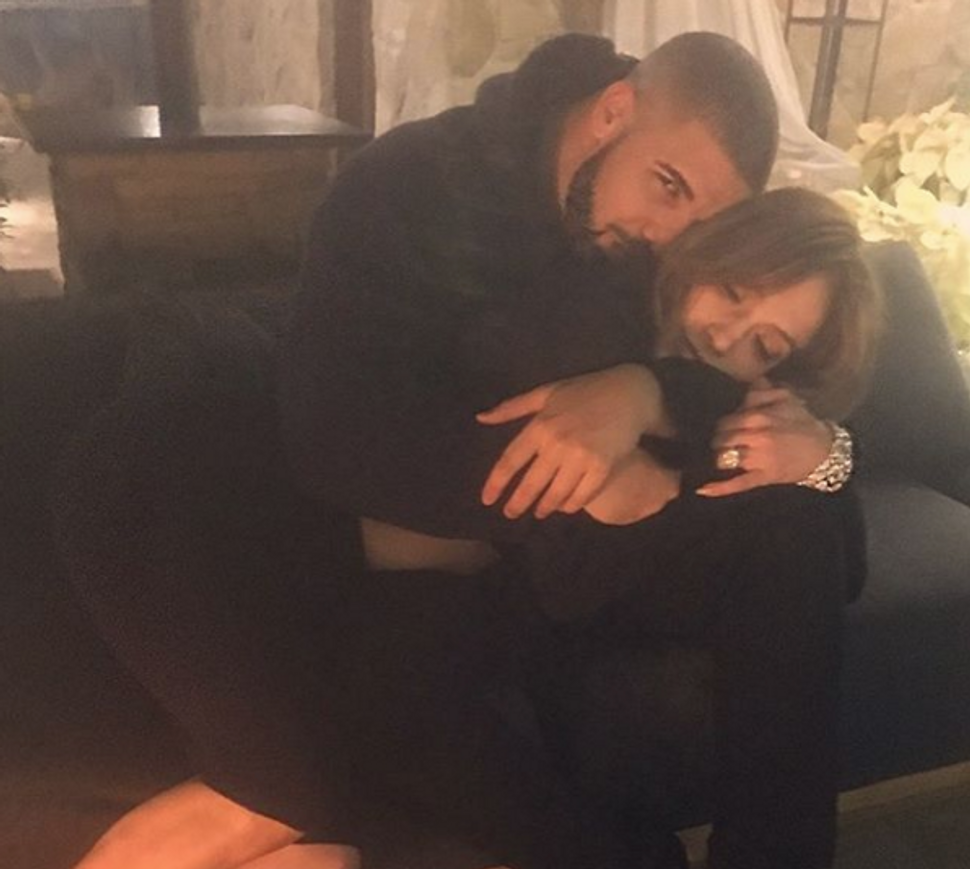 Drake and Jennifer Lopez are maybe dating and the internet community is spinning into a speculative frenzy. What does it mean that the performers posted matching Instagram pictures of themselves canoodling? Does the fact that he attended two of her Vegas shows signify something? What about Rihanna (Drake’s ex-girlfriend) recently unfollowing Lopez on social media?

Amid all of this speculation, there is one thing that most pop culture news sites can firmly agree on. Jennifer Lopez is seventeen years Drake’s senior and their readers need to know that.

Here’s how US Weekly let us know:

And Hollywood Life managed to squeeze both their ages into this headline:

Why is this age gap noteworthy? When Ryan Reynolds started dating, and subsequently married, Blake Lively there wasn’t a single pointed finger that at 40, he is eleven years her senior. Beloved power couple George Clooney and Amal Clooney have managed to make it into plenty of gossip magazines without a loud side note that he is 17 years her senior. Sure, the media chides Leonardo DiCaprio for the revolving door of supermodels he dates, but rarely is it noted — in a headline no less — how much younger they are than him (Nina Agdal, his current girlfriend, is 24, DiCaprio is 42).

Lopez, whose last boyfriend was also many years her junior, has been asked giddily during interviews with television hosts just how young she’d go. Doubtful that Ryan Reynolds would have ever been asked that same question on a press tour while he was dating Lively or, back in the day, a younger Scarlett Johansson.

Admittedly, there’s a novelty to this particular age gap. You don’t see a lot of actresses dating actors who are significantly younger than them in Hollywood, nor is it something that is depicted with any regularity on screen. When we do see it, it’s either played for laughs (Stifler’s mom in “American Pie” anyone?) or doomed to be (Jake Gyllenhaal spoiler alert kills himself after a fraught affair with an older Jennifer Aniston in “The Good Girl”).

Meanwhile, in the spirit of the holidays, let’s take a closer look at “Love Actually.” Laura Linney gets to hook up with her younger office co-worker momentarily, who she has crushed on for ages, only to quickly cut the dalliance off completely because of family obligations.

Colin Firth, however, gets to run off into the sunset with Lúcia Moniz, sixteen years his junior. They do not speak the same language and barely know each other.

A completely improbable, movie-like plot and it all works out for him. Laura Linney, with her legit long-term office crush, can’t catch a break.

That’s just a miniscule drop in the pond of the older man/younger woman combinations that have worked out on screen. Let’s not even get into Woody Allen movies because…ick.

Maybe the Drake and Jennifer Lopez relationship is a hoax. Maybe it’s really real and it’ll last. Or maybe they will date for a little while and then it’ll go the way of other doomed celebrity flings. Let it be known, though, that every time these two are written about and their ages are pointedly noted to readers, we’re taking one small step backwards. Let’s not make it seem unusual and then maybe it won’t be.

Then maybe once it becomes normalized we’ll get a really great rom-com where Tina Fey and Zac Efron are dating, and the obstacle isn’t their age gap. It’s something fun involving a whirlwind comedy of errors in Paris.